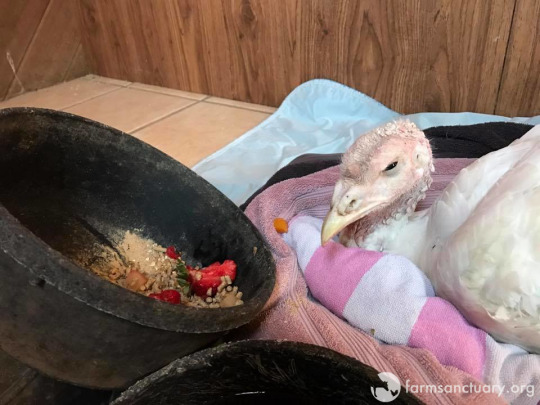 We don’t know much about Goose’s origins, but we can make an educated guess about what happened before we were notified of his situation. A woman called Farm Sanctuary looking to place two turkeys, and we mobilized to take them in. Around Thanksgiving, we begin receiving more placement requests for turkeys. In some cases, people who have been raising turkeys to be the (dead) centerpiece of their celebration change their minds once they’ve spent some time with these magnificent birds. In others, compassionate people try to undertake a turkey rescue themselves, not ready for the responsibility of caring for a turkey, but also desperately wanting to save at least one life from becoming an unnecessary part of a soon-forgotten Thanksgiving meal. Goose’s former guardians are part of the latter contingency. Though not vegan or vegetarian, the couple spared two turkeys, whom we later named Maverick and Goose, from becoming Thanksgiving meals. 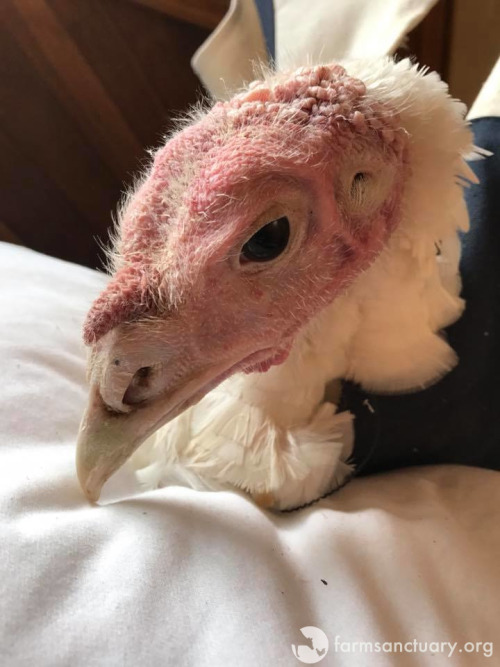 Goose recuperating in the sanctuary office 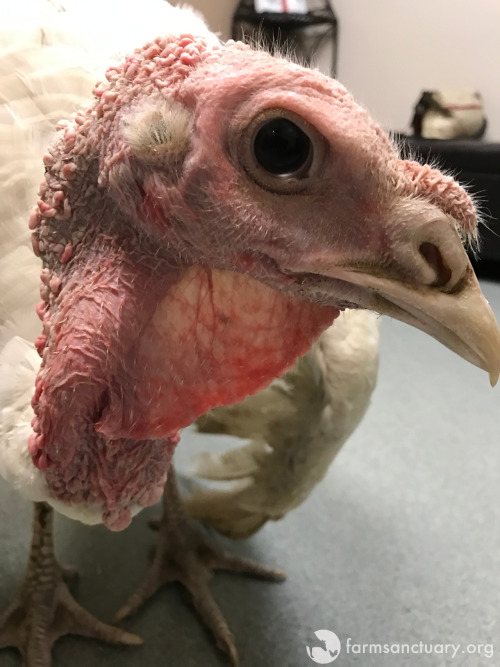 Close up of Goose at the vet using his wing as a crutch. 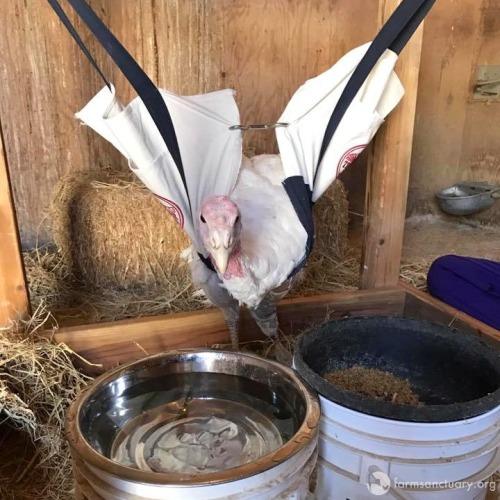 Goose in his sling

However well-intentioned Goose and Maverick’s rescuers were,
they were not equipped to properly care for turkeys, nor did they have an
appropriate enclosure and shelter in which to house them. They were uninformed about the turkeys’ needs, and Goose and Maverick languished in a small
enclosure without shelter or any food or water in sight when we arrived.

Goose at his guardians’ property, before coming to Farm Sanctuary.

Our staff members were not prepared for the scene we encountered. A brief phone call with one of the turkeys’ guardians the previous day suggested that the couple had recently rescued two six-month-old young male
turkeys and were looking to place them.
No mention was made of any health issues. So we were not expecting to find one
of the turkeys completely incapacitated and both of them too thin — but alas, that is exactly what we found.

Goose after his arrival at our Southern California Shelter.

Both Goose and Maverick were woefully underweight. Goose
weighed in at 16 pounds — far less than a turkey of his age and breed should
weigh. Although Goose was likely emaciated because he and Maverick were underfed, his condition was worsened by the
fact that he could not walk. His right hock was grossly enlarged, leaving him unable to put weight on that leg
for any significant period of time.

We brought Goose and Maverick back to our Southern California Shelter, separated them, fed them, and stabilized Goose. Early the next day, we took Goose to an avian vet, where X-rays revealed that his hock was terribly infected and swollen. He was started on a pain medication and antibiotic regimen to prepare him for surgery the next day.

Goose at the vet’s office, using his wing as a crutch of sorts.

Goose made it through surgery and recuperated at the veterinary hospital, where he remained comfortable. After a couple of days, he was sent home with a splinted leg and instructions for physical therapy.

We were all thrilled to have Goose back at the sanctuary, and staff members were at his beck and call, pampering him with gourmet meals of fruits and vegetables. We showered him with constant love and attention, which he graciously accepted.

Goose relaxing in the shelter office after eating some delicious food.

Our facilities team went to work building Goose a turkey sling. Our vet had advised that it was important to not allow him to be completely prone while convalescing, lest his legs atrophy.

Instead, with a solid and ingenious makeshift sling constructed, we were able to get Goose on his feet without requiring him to put his full weight on his recovering leg.

Goose experiencing his sling for the first time.

After a few worried moments, Goose adjusted well to being in the sling and back on his feet. He was more alert and seemed to enjoy eating while on his feet.

Goose eating in his sling.

He seemed well on his way to recovery. Every day, we sat with Goose for a couple of hours while he stood upright and supported.

We sang to him and regaled him with stories of the bright future ahead of him living the Farm Sanctuary life.

After a couple of days, though, Goose took a turn for the worse. He lost all interest in food. Nothing we offered piqued his interest. The alertness we had grown accustomed to seeing faded; Goose wanted to do nothing but sleep, even when he was in the sling.

We began tube-feeding him and administering subcutaneous fluids. His antibiotics were changed. Nothing helped. We rushed Goose in his listless state to the emergency vet, but to our dismay, he passed away en route to the hospital. Already emaciated when we met him, Goose had no reserves to fall back upon. He had no energy left to fight.

Losing Goose was not easy. We fought around the clock for him and envisioned the life we expected him to soon have, but even the most valiant of efforts are not always enough. Despite the sadness we feel at losing Goose, we rest better knowing that we gave him a fighting chance at a better life, and that he died loved by many and seen as an individual worthy of respect, of care, and of life itself.

Some may question why we bothered providing Goose with quality veterinary care — “why spend the money on one when there are so many more in need of rescue?” they may wonder. The answer is simple: Every animal in our care — no matter his or her species — receives individual, quality veterinary care. Anything less and we would be shirking our responsibility to them; when they come into our lives, we promise they will always be seen as someone, not something, and we take that responsibility very seriously.