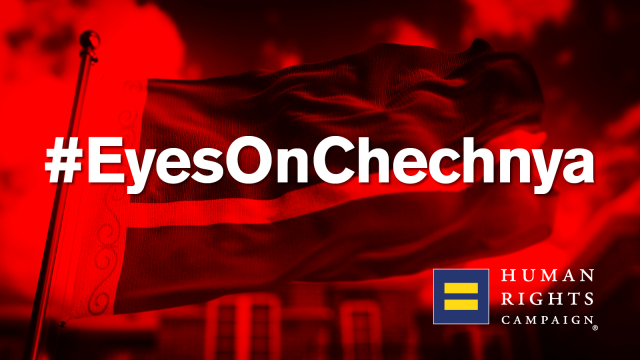 HRC is sounding the alarm on reports of renewed persecution against LGBTQ Chechens. Approximately 40 people have been detained and two killed in a “new wave of persecution” that started at the end of 2018, according to a statement from the Russian LGBT Network.

“Nearly two years after reports first surfaced of anti-LGBTQ violence and killings in Chechnya, we are once again hearing disturbing accounts of state-sanctioned detentions and abuse,” HRC Global Director Ty Cobb said. “We have repeatedly called on the Trump-Pence White House to speak out and help bring an end to this persecution, but instead the White House has largely ignored the actions of the Russian-backed regime in Chechnya.”

According to reports from the Russian LGBT Network, which has helped more than 140 people escape Chechnya since the crackdown began in 2017, law enforcement officers have detained individuals suspected of being LGBTQ in Argun, a city more than a dozen miles outside the Chechen capital.

“The local police makes every effort to prevent victims from leaving the region or applying to the courts in the future,” Igor Kochetkov, an advocate with the network, said in a statement. “They take away documents, they threaten the victims with the criminal proceedings against them or their close ones, and they force them to sign empty forms.”

On April 1, 2017, Novaya Gazeta, a Russian independent media outlet, first broke the news that Chechen authorities had rounded up and detained in secret prisons more than 100 men who were suspected of being gay or bisexual.

Chechen leaders have denied these accusations, going so far as to deny the very existence of LGBTQ people in Chechnya — a claim the Russian government astonishingly repeated. Nonetheless, there have been numerous verified reports of torture and at least three and possibly as many as 20 men have been killed.

In June 2018, HRC joined a survivor of the brutal crackdown and Kimahli Powell, executive director of Rainbow Railroad, to meet with White House and State Department officials to address the ongoing crimes against humanity occurring in Chechnya and to share the survivor’s story.

“They beat us because we are gay,” the survivor told HRC. “They believe we are supposed to die and that we shouldn’t be allowed to live. People like us shouldn’t exist.”

In December, a report released by the Organization for Security and Cooperation in Europe (OSCE), detailed the systematic torture, abuse and murder of LGBTQ people in Chechnya, stating that there is “overwhelming evidence that there have been grave violations of the rights of LGBTI persons in the Chechen Republic.” The OSCE report also calls on Russia to establish a special investigative committee to “undertake an effective, impartial and transparent investigation of the allegations” and “bring to justice the alleged perpetrators.”

From working with Congress to activating our membership and raising up our voices together, HRC continues to send a message to the Trump administration and the world that we have our #EyesOnChechnya and these crimes against humanity must stop.

“Human rights violators in Chechnya must be held accountable and be brought to justice,” Cobb said. “Lives are hanging in the balance.”

For more information about the situation in Chechnya and how you can help, click here.