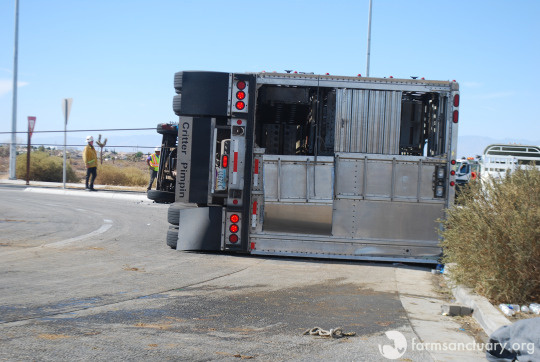 Calves at a livestock market.

Each of these journeys is fraught with certain terror and potential peril. Farm animals may be legally transported up to 28 hours without being given any food or water or being allowed off of the trailer. Further, there are no protections that prevent transporters from cramming animals tightly into trailers, giving them no room to move, turn around, or lie down. Animals are piled into double-stacked trailers or jammed tightly into crates for hours upon hours, subjected to the elements — heat, cold, rain, snow, wind — without relief or protection. When these animals are finally relieved of the misery of transport, they often confront an even greater terror: the slaughterhouse.

Meanwhile, in addition to all of the other horrors associated with transport, the risk of traffic accident during transport is great (as we documented in a 2006 report). Transport trailers risk accident from all of the same causes as any other vehicle, but the risk is increased because many of the transports occur overnight and often cover great distances. Drivers who are often paid by the mile are incentivized to drive faster than is safe with their overloaded trailers. All of these factors lead to a higher risk of traffic accident, resulting in immense trauma, significant injuries, and a high death toll for the terrified animal passengers.

A transport truck on its side following an accident in Palmdale, CA, in September.

Late last month, our Southern California Shelter staff responded to reports of an overturned cattle transport truck in the high desert. The double-decker truck had been hauling about 168 Holstein calves, male and female, who were all approximately three months old. The calves were en route to a feedlot in Kern County to be fattened up for slaughter. While navigating a traffic circle, the truck crashed, sending the truck and trailer filled with calves onto their sides. The truck driver was not injured, but many of the calves were not as fortunate.

Local animal control officers and their veterinarians arrived at the grisly scene within minutes. Trapped calves could be heard wailing inside the trailer. Live calves were trapped amidst and under the bodies of other calves who had perished. Injured calves could not move under the weight of the dead bodies piled on top of them. When the trailer was opened, dead calves were pulled out so the first responders could locate those still alive and in need. Temporary fencing was quickly set up around the trailer to allow the living calves a safe place to be temporarily evacuated. Veterinary teams assessed the calves who were injured and tended to those who could not stand. Two calves were humanely euthanized on site due to catastrophic injuries. Approximately 50 died on impact. The number of severely injured calves was not disclosed.

Southern California Shelter staff received notification of the crash soon after it happened, and immediately mobilized. After 10 minutes of quick preparation, six staff members and three vehicles were on their way to the crash site. First responders allowed us on site, and we established immediate contact with animal control officers and their veterinarians.

The animal control officers on scene have worked with us in the past, and always have the best interest of the farm animals in their care at heart. Unfortunately, though, animal control officers were not able to seize any of the calves from the crash. The transport truck was operating legally. Although it seems unimaginable, cramming 168 calves into a tight space and transporting them during the midday heat in the desert is not illegal; to the contrary, it’s commonplace.

No federal or state agency places limits on how densely farm animals may be loaded in transport vehicles or requires any special training or certification for those who transport them. In the absence of regulations, the industry defaults to its modus operandi: more, bigger, denser, faster. Dozens or even hundreds of animals are packed onto trailers with no regard for their safety.

By the time we arrived, most of the living calves had been taken away by their legal owners to a nearby ranch to recuperate. Our staff bore witness to the last of the calves being loaded onto a trailer. Most of them were up and walking, but others who were not walking were carried onto the trailer by the ranchers and first responders. Animal control officers and veterinarians successfully fought to ensure that the downed calves were not placed in the same compartment with standing calves, lest those downed be trampled to death during transport. Authorities required the ranchers to seek veterinary care for the injured calves and submit veterinary reports documenting such care to animal control within 24 hours.

Once all of the surviving calves were whisked away, the aftermath of the tragic accident loomed large. Dead bodies littered the road around the truck, discarded like trash. Although some bodies were respectfully partially covered, others lay exposed on full display. Bodies spilled out of the top of the truck. The fear and suffering these calves had experienced in their short lives was palpable. We bore witness to their pain and grieved for them, and for all of the others needlessly suffering. Profoundly affected staff members comforted one another, knowing the trauma of bearing witness would haunt us.

The toll of these transports goes beyond roadway accidents. Under federal regulations, farm animals may be transported for up to 28 consecutive hours without being offloaded to eat and drink, and a number of loopholes can push that limit to 36 hours or beyond (the rule also excludes poultry animals, who have no legal protections at all during transport). Lacking any kind of climate control, the trailers expose their passengers to extreme heat or cold. The effects of transport documented by the U.N.’s Food and Agriculture Organization (FAO) include stress, heat stroke, dehydration, bloat, trampling, suffocation, and heart failure. Even excluding accidents, transport is responsible for a significant number of industry deaths before reaching a commercial processing plant.

Still, despite the pain and our inability to save anyone from this crash, our staff will again mobilize instantly to such a scene when we are called upon to do so, because it is the least we can do

— and because every farm animal is someone, not something, a sentient individual worthy of our respect.

Please share this story and help us honor those individuals we lost on that tragic day. Thank you for being a part of our compassionate community.