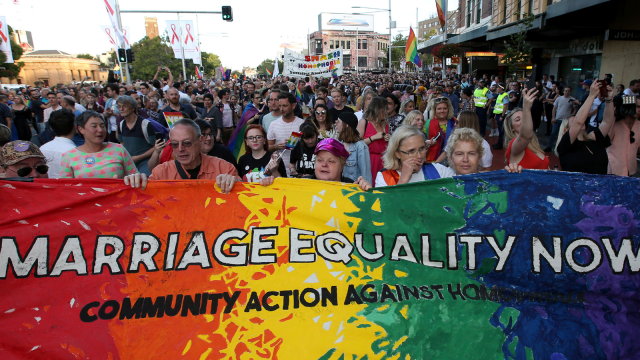 HRC celebrates the Australian House of Representatives’ overwhelming vote in favor of marriage equality legislation. The measure passed with only four votes against it. The Australian Senate previously passed the measure by a vote of 43 to 12.

“We welcome Australia into the growing family of freedom loving nations that ensure marriage equality for all couples,” said Ty Cobb, Director of HRC Global. “The overwhelming support for marriage equality Down Under is a testament to the hard work of Australia’s LGBTQ advocates and allies who fought tirelessly to make today a reality. We congratulate them on this incredibly important victory.”

After the Governor-General gives the legislation official approval in a formality known as “Royal Assent,” marriage equality will become the law of the land. Australia will become the 25th country to recognize same-sex couples’ right to marry.

The legislation followed a voluntary postal survey that showed a clear majority of Australian voters endorse equality. The postal survey came after years of stalled efforts to bring marriage equality to Australia. After the country’s governing party refused to allow a conscience vote on the issue in parliament, it undertook the controversial and expensive survey in an attempt to settle the issue. The survey was widely criticized for delaying the arrival of marriage equality.

HRC is proud to have supported the efforts of Australian LGBTQ advocates and allies to achieve marriage equality in their country and partnered with Australian Marriage Equality (AME) — a prominent national organization leading on the issue. HRC Global visited Australia in 2015 and 2016 to share strategic advice from the successful campaign for marriage equality in the United States.

Earlier this week in Europe, Austria’s Constitutional Court ruled that marriage equality will become the law of the land in that country by January 2019.

Learn more about HRC Global’s work around the world here.