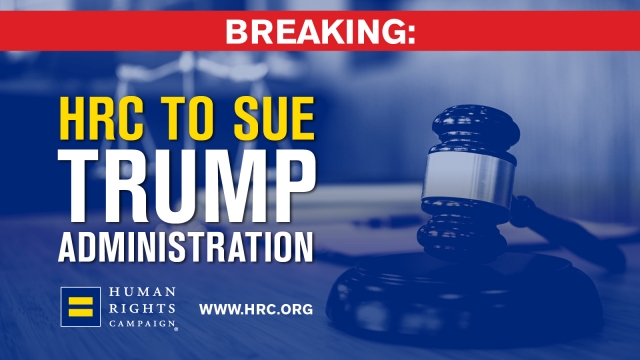 The Human Rights Campaign announced that it will file a lawsuit challenging the Trump-Pence administration’s decision to roll back critical civil rights protections in the rule implementing Section 1557 of the Affordable Care Act (ACA). The new rule will eliminate explicit protections from discrimination based on sex stereotyping and gender identity that have existed under law, thereby sanctioning discrimination against LGBTQ people in health care programs and activities.

“We cannot and will not allow Donald Trump to continue attacking us. Today, the Human Rights Campaign is announcing plans to sue the Trump administration for exceeding their legal authority and attempting to remove basic health care protections from vulnerable communities including LGBTQ people. And, to add insult to injury, the administration finalized this rule on the anniversary of the Pulse shooting, where a gunman killed 49 people in an LGBTQ nightclub,” said HRC President Alphonso David. “LGBTQ people get sick. LGBTQ people need health care. LGBTQ people should not live in fear that they cannot get the care they need simply because of who they are. It is clear that this administration does not believe that LGBTQ people, or other marginalized communities, deserve equality under the law. But we have a reality check for them: we will not let this attack on our basic right to be free from discrimination in health care go unchallenged. We will see them in court, and continue to challenge all of our elected officials to rise up against this blatant attempt to erode critical protections people need and sanction discrimination.”

The rule change comes in the midst of the twin epidemics of COVID-19 and racial violence. Over the past few months, we have witnessed a rash of horrific violence against Black and transgender people: 73% of all transgender and gender non-conforming people killed violently are Black, and seven transgender and gender non-conforming people have been violently killed since March 28 alone. LGBTQ people are also particularly vulnerable to both the health and economic impacts of COVID-19. HRC recently published a research brief outlining these risks, finding that many in the LGBTQ community are uniquely vulnerable, as they are more likely to work in highly affected industries, often with more exposure and/or higher economic sensitivity to the COVID-19 crisis, are less likely to have health coverage and are more likely to smoke and have chronic illnesses like asthma. One in five LGBTQ adults have not seen a doctor when needed because they could not afford it. Black LGBTQ adults (23%), Latinx LGBTQ adults (24%) and all transgender women (29%) are most likely to avoid going to the doctor because of costs. Read the full brief here.

HRC has long fought against the Trump-Pence administration’s attempts to revise this rule in a way that would undermine protections for LGBTQ people since it was announced in 2019. HRC, along with its coalition partners, submitted more than 120,000 public comments expressing concerns about the proposed rule that year, with 26,000 coming directly from HRC members. This is the first lawsuit HRC will file after announcing its new impact litigation initiative in October 2019.

Fear of discrimination causes many LGBTQ people to avoid seeking health care, and when they do enter care, studies indicate that they are not consistently treated with the respect that all patients deserve. Studies by Lambda Legal show that 56% of LGB people and 70% of transgender and gender non-conforming people reported experiencing discrimination by health care providers — including refusal of care, harsh language and physical roughness because of their sexual orientation or gender identity. According to a report by the National Center for Transgender Equality, 23% of transgender respondents did not see a doctor when they needed to because of fear of being mistreated as a transgender person and a startling 55% of transgender respondents who sought coverage for transition-related surgery were denied.

According to HRC Foundation’s analysis of the 2018 Behavioral Risk Factor Surveillance System (BRFSS), the nation’s premier system of health-related telephone surveys, 17% of LGBTQ adults do not have any kind of health insurance coverage, compared to 12% of non-LGBTQ adults. Furthermore, 23% of LGBTQ adults of color, 22% of transgender adults and 32% of transgender adults of color have no form of health coverage. This can lead to avoidance of medical care even when medically necessary and to severe economic hardship when medical care is ultimately accessed.

END_OF_DOCUMENT_TOKEN_TO_BE_REPLACED 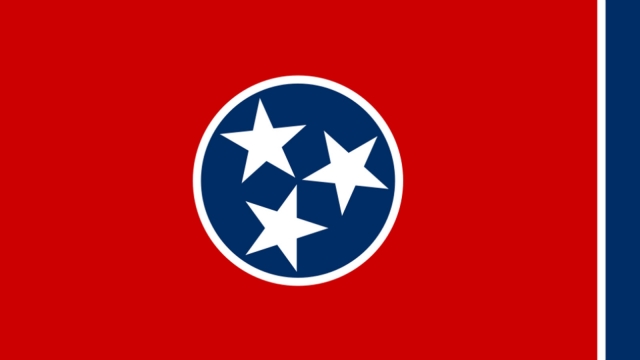 Today, HRC condemned Tennessee Governor Bill Lee for signing HB 836, a bill that would allow child welfare organizations — including taxpayer-funded adoption and foster care agencies — to turn away qualified Tennesseans seeking to care for a child in need, including LGBTQ couples, interfaith couples, single parents, married couples in which one prospective parent has previously been divorced, or other parents to whom the agency has a religious objection.

“It’s disturbing that Governor Bill Lee signed legislation that will harm children in Tennessee,” said HRC President Alphonso David. “Elected officials should protect all of their constituents, not just some. Now, Tennessee has the shameful distinction of being the first state to pass an anti-LGBTQ bill into law this year. This bill does nothing to improve the outcomes for children in care, shrinks the pool of prospective parents and is a blatant attempt to discriminate against LGBTQ Tennesseans. With many months ahead in the Tennessee legislative session, Tennesseans should make their voices heard — loudly — to ensure that the legislature and Gov. Lee do not continue to target LGBTQ Tennesseans.”

“As this bill becomes law, Tennessee’s LGBTQ community is worried about the introduction of even more discriminatory bills,” said Chris Sanders, executive director of the Tennessee Equality Project. “The Governor and the Legislature must put a stop to this kind of demeaning public policy.”

HB 836 could have a sweeping, harmful impact in child welfare services by enabling discrimination against LGBTQ people, same-sex couples, interfaith couples, single parents, married couples in which one prospective parent has previously been divorced, or other qualified parents to whom an agency has an objection. The biggest barrier to placing children with families is a lack of qualified prospective parents; having the state give contractors and subcontractors a license to discriminate, thereby limiting the pool of prospective parents for no legitimate reason, is unconscionable and an unacceptable use of taxpayer dollars.

Research consistently shows that LGBTQ youth are overrepresented in the foster care system, as many have been rejected by their families of origin because of their LGBTQ status, and are especially vulnerable to discrimination and mistreatment while in foster care. HB 836 will only exacerbate these challenges faced by LGBTQ young people.

END_OF_DOCUMENT_TOKEN_TO_BE_REPLACED

Today, HRC announced its support for the Community Safety and Health Amendment Act of 2019, legislation i…

END_OF_DOCUMENT_TOKEN_TO_BE_REPLACED 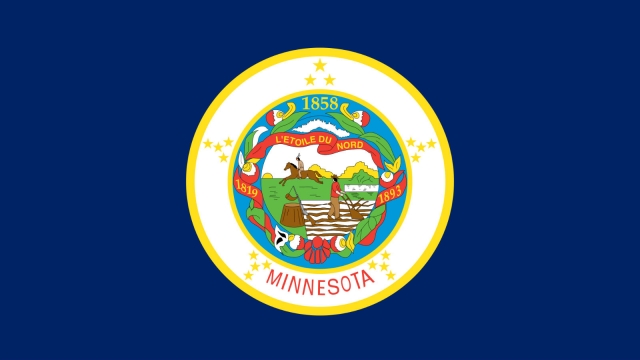 HRC celebrated a vote by the Minnesota House of Representatives to include H.F. 12, legislation to protect LGBTQ youth from the dangerous practice of so-called “conversion therapy,” in the HHS Omnibus finance bill. The Minnesota Senate will also consider a finance bill. If enacted,  Minnesota would become the 17th state in the U.S. to protect youth from this egregious practice. Colorado recently passed a similar bill through its legislature; it is soon heading to the governor’s desk.

“All children deserve to live authentically and free from fear of this dangerous and discredited practice with potentially life-threatening consequences,” said HRC National Field Director Marty Rouse. “We thank the Minnesota House of Representatives for taking action on this issue and urge the state Senate to pass this measure and join the growing number of states and municipalities that protect LGBTQ youth from abusive ‘conversion therapy.”

“Thousands of Minnesotans have worked so hard over the last few months to stop the torturous practice known as conversion “therapy” and today, during OutFront’s LGBTQ Lobby Day, the Minnesota House sent a strong message of support for LGBTQ Minnesotans by including the Mental Health Protections Act (H.F. 12) in the Health and Human Services (HHS) omnibus bill,” said Monica Meyer, Executive Director of OutFront Minnesota. “We could not be more proud of every single LGBTQ and Allied person who made this possible.”

There is no credible evidence that conversion therapy can change a person’s sexual orientation or gender identity or expression. To the contrary, research has clearly shown that these practices pose devastating health risks for LGBTQ young people such as depression, decreased self-esteem, substance abuse, homelessness, and even suicidal behavior. The harmful practice is condemned by every major medical and mental health organization, including the American Psychiatric Association, American Psychological Association, and American Medical Association.

According to a recent report by the Williams Institute at UCLA School of Law, an estimated 20,000 LGBTQ minors in states without protections will be subjected to conversion therapy by a licensed healthcare professional if state officials fail to act. Last year, national organizations representing millions of licensed medical and mental health care professionals, educators, and child welfare advocates declared their support for legislative protections against conversion therapy.

HRC has partnered with the National Center for Lesbian Rights (NCLR), the Trevor Project, MassEquality and local advocates in support of these vital protections. More information on the lies and dangers of efforts to change sexual orientation or gender identity can be found here.

END_OF_DOCUMENT_TOKEN_TO_BE_REPLACED

Today, HRC celebrated a vote by the Massachusetts House of Representatives to pass bipartisan legislation…