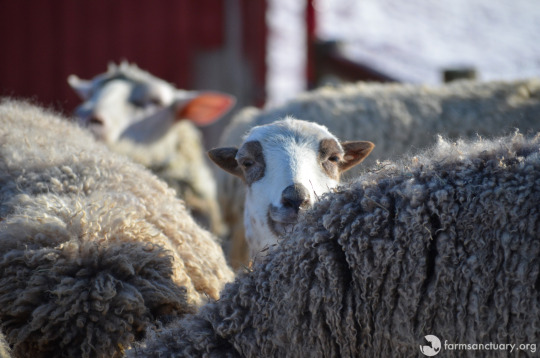 On October 16, 2013, Gothamist, a popular New York City news blog, published a headline declaring: “Activist Rescues Sheep From Brooklyn Butcher, But It’s The Wrong Sheep.” Just the day before, a lamb had escaped from Brooklyn’s Al Noor Halal Meat Market. When activist Mike Stura read the news story about this incident, he quickly set off for Brooklyn to see if he could help this poor sheep. 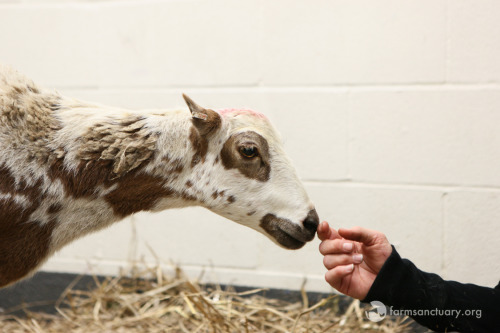 The first touch after the long lap nap The exhausted gal hours after arrival. 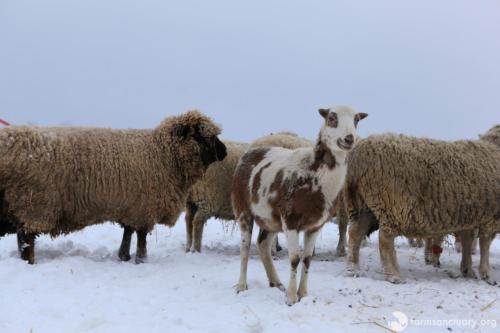 It’s cold but Aysha seems to feel just fine once she is with her flock. 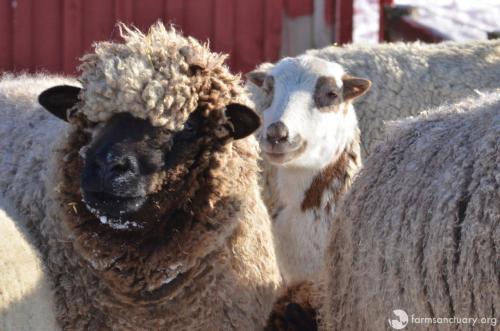 With her sheeple and no longer hiding behind them. First day in her new barn- she arrived when no one was home. 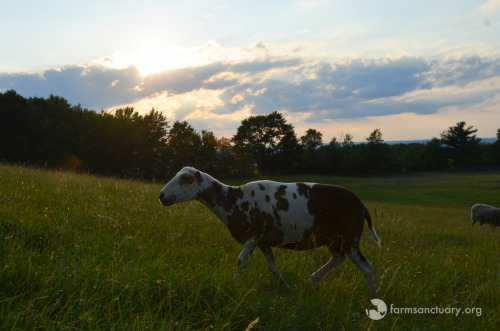 The headlines from Gothamist.

On the way to the slaughterhouse, he managed to contact the owner and tell him that he was coming for the sheep. After speaking to the owner, he negotiated the release of the sheep, but then things got a bit complicated. When he arrived, he entered a live market where many slaughtered sheep were hanging or in various stages of butchering.

The picture that started it all.  A worker from the slaughterhouse drags the escaped lamb back to slaughter.

When the owner finally brought out the sheep, Mike immediately realized that she was not the escaped sheep from the photo — in fact, she was an entirely different breed. But to say this right then would have meant that Aysha would be sentenced to death, and the fact that he was given a sheep for free was already a huge deal.

A worker brings Aysha to Mike Stura, stating that this was the sheep who had escaped (although clearly she was not).

When Mike arrived home, he could not sleep knowing that the sheep he had set out to get was not saved. At about 4 a.m., he jumped back into his Jeep and waited out in front of the live market for the owner to arrive. Mike told the owner that the animal he had been given was not the same animal who escaped, and he was there to get that sheep.

That week, more than 7,000 sheep were slaughtered in the city in celebration of Eid Al-Adha.

Mike was then informed that, unfortunately, the escaped sheep had been captured and reclaimed by the market. Despite her brave dash for freedom, this sheep’s fate was sealed the moment workers labeled her with a number, designating her for slaughter for the Muslim holiday Eid Al-Adha for a customer who had selected her. Along with thousands of others throughout the city, this sheep was killed for the holiday Feast of the Sacrifice.

Aysha in the back of the truck, safe from her original fate.

The owner took him inside and showed him there were no sheep left. The man then looked Mike in the face, put his hand on his shoulder, and said, “My friend, you have saved one life today.” Mike, known for his negotiation tactics with slaughter facilities, could not save the sheep he had driven to the city to help. But the owner was right: He saved a life of one sheep, who was no less deserving than any sheep sacrificed that day.

Exhausted eyes. This girl was clearly both mentally and physically worn out.

On the way home, he called Farm Sanctuary and told us about her — how quiet she was. But she was, we would soon discover, a very frightened sheep. Likely still in shock from the horrors she’d escaped, Aysha hadn’t moved a muscle during the drive. But when placed in the yard of our onsite Melrose Small Animal Hospital, she fled for her life for the first time.

Aysha had red paint marker on her head and ear, and was terrified and exhausted.

This tiny sheep threw herself headlong into our fencing, desperately trying to flee. We finally corralled her into a hospital pen, where she realized she was trapped, turned and quickly dived into me (Susie). Thankfully, she collapsed in my arms, giving up once again.

I remember feeling how rapidly her heart was beating for the first hour in my lap. Thankfully, she calmed down.

Sheep and other animals brought to the live markets usually arrive in family flocks, which means that they witness not only the deaths of other sheep, but the deaths of sheep they are close to: those of parents, siblings, or friends. This has to be one of the greatest horrors an animal can experience.

Tiny and very young Aysha in our pen at Melrose Hospital.

As she experienced compassion and kindness — possibly for the first time in her life — the exhausted sheep mustered enough trust to eat from our hands. A few hours later, she fell asleep with her head resting on my shoulder. When I was expected on a telephone conference, I took the call from Aysha’s stall so as not to disturb her much-needed rest. She was clearly worn out.

For weeks, she continued to be terrified, but she was sadly too sick to join our flock, having been diagnosed with the pox virus called sore mouth and a heavy parasite load. She stayed temporarily in our viewing pen, and metal had to be put over the window so she would not smash into it trying to get away. She spent most of her time in a corner, not facing people who came in to treat and feed her.

She knew her name but still was not yet into human contact. Although she loved her big woolly friends…

Once she began to recover, however, we took in two more sheep — elderly ladies Babushka and Ya Ya — and this terrified girl found strength in her new family. And what a difference a few friends can make!

Still playing peekaboo: Aysha peers out from behind Dominick on the right, Dara at left, and of course, her friend Babushka by her side.

When she met her new friends, she immediately hid behind them,and they seemed to understand her needs. They stomped their front legs when we would come in, which (in sheep speak) is a warning to stay away. And if she didn’t see you watching, she was playing with her new pals (who both were older and not in the mood, but they seemed to let her do her thing).

This year, a much chubbier Aysha with pal Mandy.

And when they entered the main herd, her true personality shone through. Although she hid from us for a while (kind of a “Where’s Waldo” thing going on), she did not hide from any of her new friends. She instead loved every minute of meeting her new sheeple.

With one of her best pals, Dara. Both girls are not huge fans of people, but they certainly love their sheeple. (The hole in her ear is from the tags that were put in before she was shipped to the live market.)

And she continues to love her life with us. This weekend actually marked three years since she arrived at our New York Shelter, and during those three years she has met and loved a new family of sheep: her family. And this year she was greeted with sheeple of her own breed, Katahdin hair sheep.

Aysha is a hair sheep, so will never have to be sheared, which is fine by her. She is a member of a breed called Katahdin.

The courageous sheep who made a dash for freedom through the streets of Brooklyn could not save her own life, but through her escape and the fast actions of a human rescuer, another life lives on, and her story and the stories of the thousands of others who are killed at live markets can be told.

She inspired action in a rescuer and mercy in a butcher. She brought a precious new member to the Farm Sanctuary family. And she gave Aysha a gift that, only the day before, she had no chance of receiving: the promise of a lifetime at sanctuary surrounded by family and filled with peace.

Safe and sound and living the Farm Sanctuary life — beautiful Aysha looks out over her pasture.