Each year, HRC is proud to mark National Adoption Month in November. This year, as the 2016 Presidential Election quickly approaches we highlight Hillary Clinton’s campaign for President and her steadfast commitment to LGBTQ youth and families.

Hillary Clinton has been a long-time advocate for giving all children the opportunity to have a loving, permanent family. She called it a “fundamental obligation” in remarks to HRC in 2007. As First Lady, she worked to defeat a measure preventing unmarried couples from adopting in the District of Columbia, and has remained committed to ending the discriminatory treatment of LGBTQ families in adoption. In her policy platform, she has committed to working with Congress to pass the Every Child Deserves A Family Act to prevent discrimination against potential foster care and adoptive families on the basis of sexual orientation, gender identity, or marital status. 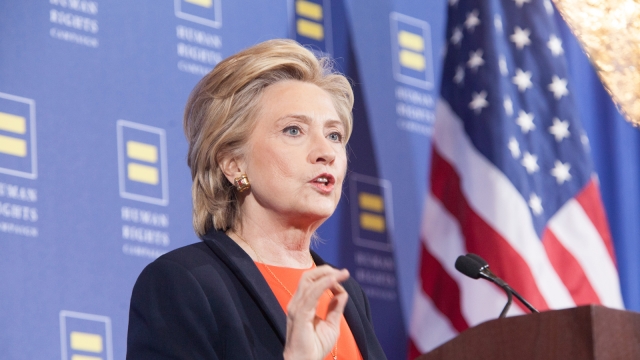 “I will also fight to defend lesbian, gay, bisexual, and transgender parents….Being a good parent has absolutely nothing to do with your sexual orientation or your gender identity,” Clinton said in a historic speech to HRC members and supporters last year. “The thousands of happy, healthy children being raised by LGBT people proves that.”

She described steps she would take to make sure no prospective adoptive parent is discriminated against because they are LGBTQ: “As president, I would push to cut off federal funding for any child welfare agency that discriminates against LGBT people,. For me, there is no excuse — none — for hurting children and families like this.”

Her commitment goes well beyond the realm of adoption. In 2010, as Secretary of State, Clinton released a video for It Gets Better to tell LGBTQ young people that they are not alone and they are loved. She urged for the creation of safe spaces for LGBTQ people.

She has promised to fight to end the harmful practice of “conversion therapy” for minors, and to work with Congress to ensure adequate funding and safe and welcoming shelter for homeless youth, including LGBTQ youth who are vastly overrepresented in the homeless population.

We’re with her because she’s with us. Join HRC as we #turnOUT the pro-equality vote across the country.

National Adoption Month is a nationwide effort to bring awareness to the more than 400,000 children and youth waiting for a permanent family and to recognize thousands of adoptive families around the country for their contribution to child welfare. Check out HRC’s list of Leaders in Supporting and Serving LGBTQ Youth and Families.