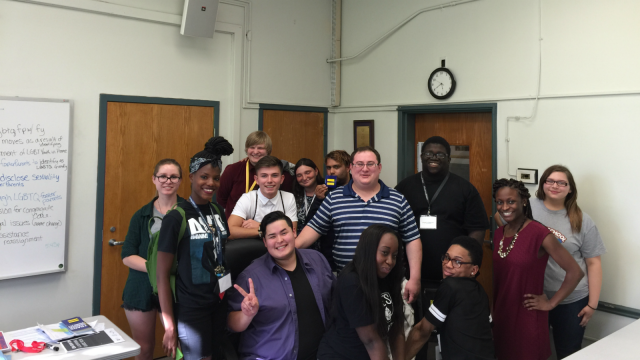 On behalf of HRC’s All Children – All Families (ACAF) project, I co-facilitated a workshop on the experiences of being an LGBTQ youth in foster care and key issues these young advocates could address with the members they shadowed. The intersection is important because many LGBTQ youth are over-represented in the foster care system and have an added layer of trauma that comes with being rejected or mistreated because of their sexual orientation, gender identity or gender expression.

After an initial ice breaker, the youth opened up about their personal experiences and those of their LGBTQ friends and family. One attendee shared that her best friend, who identified as gay, disappeared from school having been sent to “conversion therapy.” She attended our workshop for tips to talk to her Congressional representative about “conversion therapy” and how she could advocate against the practice and its harmful effects.

Another youth attended to ask his congressional representative if the foster care system could do more to protect his transgender sister during her transition. Several youth in the room cited foster-family rejection because of their sexual orientation and advocated for more LGBTQ-friendly families.

The workshop reaffirmed the importance of the work we do in the ACAF project. It is imperative that we aid in building foster care agencies’ capacity to provide inclusive services and resources for LGBTQ youth – many of whom are often forced out of their homes, or will run away, becoming homeless or entering the foster care system. ACAF gives me hope that one day LGBTQ youth will always be uplifted and affirmed in the foster care system. Until then, we keep working.