On August 10th, the Human Rights Campaign released the following statement in response to a new poll released by Public Policy Polling showing an overwhelming 58 percent majority of North Carolinians believe that the discriminatory HB2 law is hurting their state’s economy and reputation. The survey also revealed that voters in the Tar Heel State reject the specious argument that HB2 has “made the state safer,” with only 29 percent agreeing with that statement.

And, by a 12-point margin, voters say North Carolina Gov. Pat McCrory’s handling of the issue makes them less likely to vote for him. McCrory signed the measure into law.

“As this new poll reveals, there is no doubt that HB2 is inflicting very real harm on the people, reputation, and economy of North Carolina,” said JoDee Winterhof, HRC Senior Vice President for Policy and Political Affairs. “Instead of doubling down on discrimination and undertaking a bizarre campaign to deflect blame for the fallout, Governor McCrory and state lawmakers should take responsibility and work to fix the mess they created. HB2 must be repealed before it causes even further damage.” 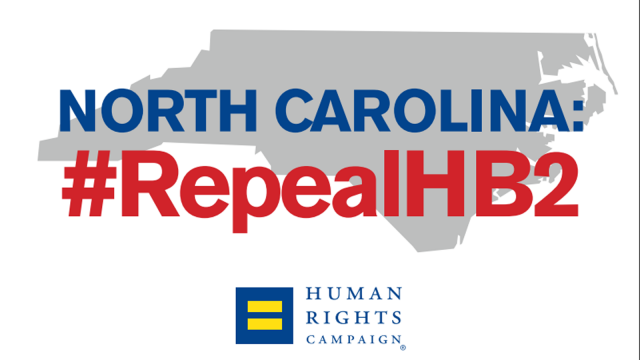 The full analysis from Public Policy Polling is below.

North Carolina Races Tight Across The Board

In the Governor’s race Roy Cooper has a slight advantage with 43% to 42% for Pat McCrory, and 4% for Libertarian Lon Cecil. Pat McCrory continues to be under water on his approval rating, now for 37 months running. 43% of voters give him good marks to 47% who disapprove. Opinions are pretty closely split three ways when it comes to Cooper with 36% of voters rating him favorably, 34% unfavorably, and 30% having no opinion either way.

HB2 continues to spell trouble for Pat McCrory. Only 30% of voters in the state support it to 43% who are opposed. By a 12 point margin voters say the way McCrory has handled the issue makes them less likely to vote for him- 43% less likely compared to only 31% who say it makes them more likely to support him. There’s a good chance that if not for HB2 McCrory would be favored for reelection at this point.

We continue to find 2 overwhelming sentiments when it comes to HB 2:

2) Voters don’t think HB2 is actually having the impact it’s supposedly intended to have. Just 29% think it’s made North Carolina safer, to 50% who say it hasn’t made the state safer. A lot of the rhetoric around HB2 has focused on its helping make women safer but only 21% of them think it’s had that effect to 54% who say it has not.

The other key races for state offices in North Carolina all remain very competitive as well. Democrat Dan Blue III has 39% for State Treasurer to 37% for Republican Dale Folwell. Democrat Josh Stein has 39% for Attorney General to 38% for Republican Buck Newton. And the Lieutenant Governor’s race is dead even with incumbent Dan Forest and challenger Linda Coleman each at 37%. It’s the same story in the key State Supreme Court contest with incumbent Bob Edmunds and challenger Mike Morgan each coming in at 21%.

North Carolina’s Senate race is close as well. Richard Burr leads with 41% to 37% for Deborah Ross, and 5% for Libertarian Sean Haugh. The overarching themes of this race remain the same. Burr is not popular, with only 28% of voters approving of the job he’s doing to 39% who disapprove. But Ross is still pretty much unknown, with only 39% of voters having an opinion about her one way or another. Burr’s weak numbers make voters open to the possibility of replacing him, but they’ll have to learn more about Ross before they decide whether they think she’s a better alternative or not.

Ross has a number of issues to work with where Burr is very much at odds with the wishes of the American people. 78% of voters in the state supporting barring those on the Terror Watch list from buying a firearm, including 81% of Republicans, 78% of Democrats, and 73% of independents. 77% support background checks on all gun purchases, including 81% of Democrats, 75% of Republicans, and 71% of independents. North Carolinians even support an assault weapons ban by a 51/39 spread.

We also find by a 60/23 spread that North Carolinians would like to see the Senate move forward with Merrick Garland’s nomination to the Supreme Court by holding hearings. There’s bipartisan agreement on that issue with Democrats (74/13), independents (55/24), and Republicans (43/36) all in agreement. Finally we find 71% of North Carolinians- including 86% of Democrats, 70% of independents, and 51% of Republicans- would support increasing the minimum wage to at least $10 an hour. Burr is well out of step with public opinion on all of these things.