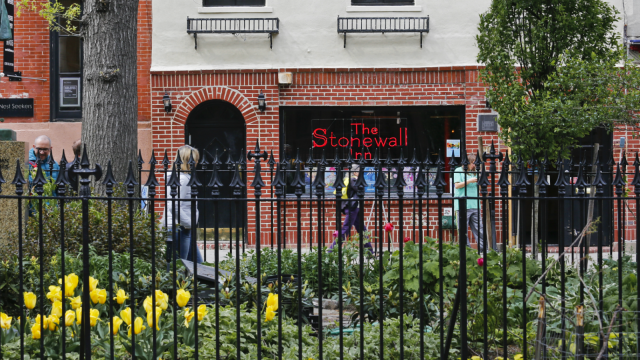 As LGBTQ Pride Month comes to a close, HRC recognizes another momentous day in LGBTQ history: the anniversaries of the uprising at Stonewall in 1969 and the first pride parade in 1970.

Today’s anniversary is all the more special because Christopher Park- the home of the famous Stonewall Inn- was recognized yesterday as America’s first-ever national LGBTQ monument.

On June 28, 1969 the uprising at The Stonewall Inn, a local bar, in New York City was a pivotal marker in beginning of the LGBTQ rights movement in the U.S. Harassed by local police simply for congregating, LGBTQ patrons decided to take a stand and fight back against the brutal intimidation they regularly faced.  By refusing to resign themselves to the shadows of that bar or of American society, these early pioneers helped birth a movement to eradicate discrimination against all LGBTQ Americans. The events of those nights helped inspire a social awakening for many in the LGBTQ community and had a profound effect on the nation’s perception of LGBTQ people. The following year on June 28, the first gay pride marches took place in New York, Chicago and Los Angeles to commemorate the anniversary of this brave stand against injustice.

Throughout the course of American history, there have been a number of events that have shaped the U.S. as we know it, and the uprising at Stonewall Inn and Christopher Park are now an official part of that national history. Prior to 1969, there were no LGBTQ pride parades, and few well-known examples of people living open, authentic lives. Those brave acts at Stonewall -- one of several acts of resistance by early LGBTQ advocates -- helped spark a revolution in the LGBTQ equality movement.

More than 45 years later, pride events are held nationwide in cities big and small – from San Francisco to Omaha and New York to Sioux Falls, members of the LGBTQ community and their allies gather at festivals and parades to celebrate the progress we’ve made, but also to recognize the distance we still have to go to achieve full equality.

“It is our hope that by honoring these pioneers, this new national monument will be a source of inspiration to a new generation of Americans across the country standing up for equality and uniting to show the world that love conquers hate,” HRC President Chad Griffin said. “We are incredibly grateful for President Obama’s leadership in recognizing the LGBTQ community’s contributions to our nation’s march towards liberty and justice for all.”

As we reflect upon our movement, especially after the Orlando massacre earlier this month, we know that the there is more work to do to advance LGBTQ equality around the globe. We will work to advance the ideals of what happened at Stonewall sparked that night in 1969, bringing us together collectively as a community and as Americans to move equality forward.