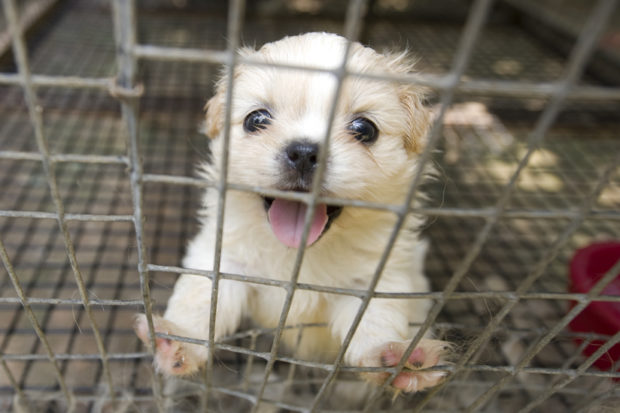 Vigilance by state authorities is more important now than ever before because in recent years the U.S. Department of Agriculture, which licenses about 2,900 puppy mills nationwide, including about 800 in Missouri, has abandoned its responsibility to enforce the Animal Welfare Act. Photo by Michelle Riley/The HSUS

Just days after the release of our annual Horrible Hundred report, Missouri’s attorney general has sued to shut down one of the puppy mills named in it. The owners of Little Bit Ranch in Unionville, Missouri, failed to provide adequate veterinary care for their dogs and left them with only frozen water, or no water at all. Some of the animals had caked or moldy food available to them; one food bowl even had a maggot in it, state inspection records show. The facility had been warned in the past about dirty conditions and dogs in cages that were too small.

Altogether, state inspectors had found 50 violations of state law over the course of eight inspections at the puppy mill since August of last year.

This is the fifth puppy mill from our Horrible Hundred list that Attorney General Eric Schmitt’s office has filed a lawsuit against in the last ​two years. Earlier this year, Schmitt sued Debra Ritter of Cornerstone Farms, who had appeared in five Horrible Hundred reports, for repeatedly failing to provide veterinary care and decent living conditions for her dogs. The massive puppy mill closed down soon after.

In a press release yesterday, Mr. Schmitt promised “swift action against substandard or non-compliant breeders in Missouri wherever possible,” adding that his office would continue to work with the state agriculture department to address breeders who violate the state’s animal welfare law.

We applaud the attorney general and his office for moving decisively on problem puppy mills. We also urge him to do more: Missouri has a major puppy mill problem and the state has topped our Horrible Hundred report every year that we’ve compiled it. This year, 30 of the 100 mills in our report were located in Missouri.

Vigilance by state authorities is also more important now than ever before because in recent years the U.S. Department of Agriculture, which licenses about 2,900 puppy mills nationwide, including about 800 in Missouri, has abandoned its responsibility to enforce the Animal Welfare Act. As we’ve been reporting, the USDA has drastically scaled back on issuing citations to breeders, giving them free rein to continue hurting animals even after they have been caught.

We also urge Missouri to put in place stronger penalties and better enforcement to ensure that puppy millers who hurt animals do not just go back to business as usual.

In 2019, Schmitt filed suit against two other breeders in our current report, Puppy Love Kennel, aka Cory’s Cuties (Cory Mincey) and Cedar Ridge Australians (Marlisa McAlmond), but both of the operations are still open at this time, to the best of our knowledge. Mincey, a notoriously problematic AKC breeder whose mill, Cory’s Cuties, has appeared in two of our Horrible Hundred reports, was fined $5,500 after state inspectors repeatedly found underweight animals and poor conditions on her property, but most of the fine was suspended as long as the operation does not have any new “substantial” violations for two years. We have called upon the AKC to stop supporting puppy mills like Mincey’s, but the group continues to fight laws that would better regulate puppy mills and that would make it easier for law enforcement to permanently confiscate suffering animals.

Unfortunately, the suffering of the dogs at Little Bit Ranch, the breeder that was just sued, may not be over. We have learned that the dogs are going to auction—a common problem in Missouri where breeders who are shut down can sell their dogs to other breeders at auctions and make tens of thousands of dollars, pushing the animals into yet another cycle of breeding and abuse at a different puppy mill. This is simply not acceptable. Missouri should order the owners of Little Bit Ranch and other breeders who are shut down to turn in their mistreated dogs to licensed, reputable shelters or rescue groups that can rehabilitate them and give them an opportunity to live out the rest of their lives as cherished pets.

The HSUS is working on many fronts to stop puppy mills—through legislation at the local, state and federal levels, through the courts, through our investigations, through reports like the Horrible Hundred, and by raising awareness. We are making progress every day, but stopping puppy mills for good will require support from concerned citizens and conscientious consumers. If you are aware of any puppy mill abuse, please contact your state attorney general and local humane law enforcement and file a complaint. If you have purchased a sick puppy from a problem seller in any state, please report it to us here. And if you’re in the market for a pet, do not buy a puppy from a pet store or online, because that animal is very likely to be sourced from a puppy mill. There is no doubt that the United States has a big puppy mill problem, but working together, we can end the suffering of thousands of companion animals who are now trapped in this abuse.

The post Missouri moves to shut down Horrible Hundred puppy mill for keeping dogs in filthy conditions appeared first on A Humane World.