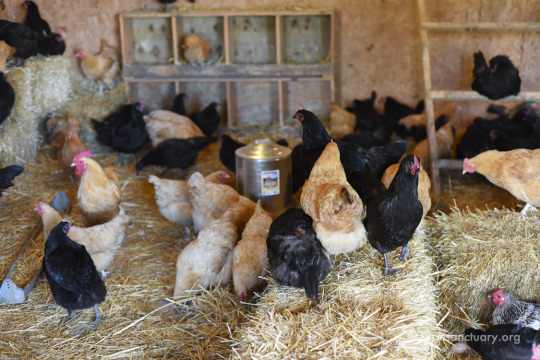 It’s raining hens! Hallelujah, it’s raining hens! Amen. And we are looking for homes! Over the past month, we have taken in more than 300 hens (and a few roos), and 100 more are on the way. Sex-Link hen from our most recent rescue. 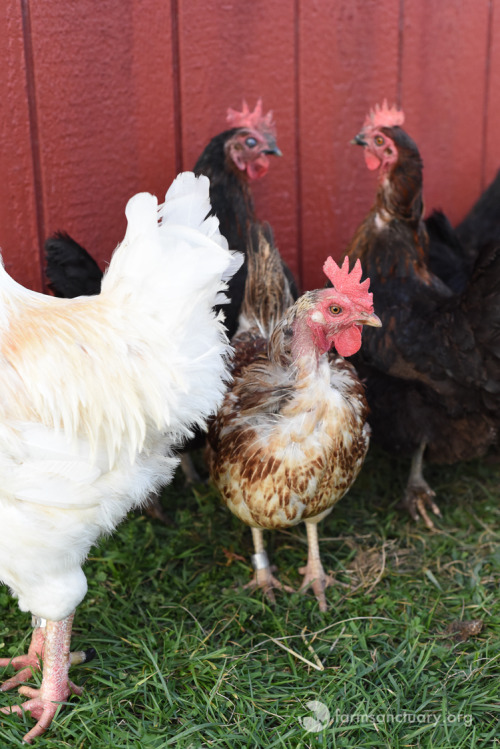 Still a lot of bald gals, but the feathers are growing back on the Florida hens. Our Florida Flock really starting to look much healthier than the day they arrived. Two of the Florida gals relaxing in the grass by their new barn. One of our very debeaked and very sweet PA girls who survived horrible starvation and neglect. Tiny little gal from our most recent rescue and one of over 200 birds left to starve to death. 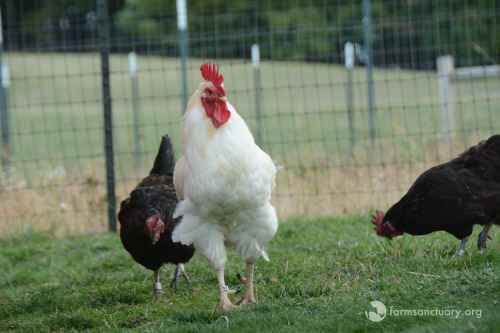 Equipped with his new spur covers, new and very handsome rooster Marvin will hopefully be able to keep his hens more feathered than he used to.

“I sure hope we get some feathers soon — winter is coming and we are from Florida!”

They come from a variety of situations. The first group of chickens are survivors from a case in Pennysylvania, where a large number of hens died at the location prior to the rescue. This group of beautiful gals were living on what was called Hedrick Family Farm and Produce, but when the proprietor of the small farm was evicted, he left many animals behind with no food and water.

Some of the girls from Pennsylvania settling in on their first day at sanctuary.

Like so many so-called “farm-to-table” or farm stand operations who sell “fresh and organic” produce and eggs, this farm was presenting itself on Facebook as having amazing products that could even be delivered to your door — yet behind the scenes, the animals were suffering and dying from neglect. Of the 70 animals left behind when he was evicted, 30 passed away from starvation.

Happy girl able to finally be outside and flapping her wings! Happy BOCK BOCK BOCKtober!

The next group of hens arrived from Queens, NY, and had been rescued and raised by a homeless man named

who lives under a bridge in Howard Beach. For years, Mohamed has been trying to save the survivors of animal sacrifice rituals performed there.

These beautiful girls are breeds used for meat production and likely come from the large number of active live markets in the NYC area.

These young birds arrived at Farm Sanctuary, as you might expect, with health issues. They are now being treated for pneumonia, worms, and a heavy poultry mite infestation — so thankfully, we follow strict isolation procedures, keeping them away from our resident population.

The new gals and their new home. No longer living under a bridge for these girls.

Then came the hens, and two very handsome Leghorn roosters, who arrived a few weeks ago from Florida. I am sure they are not happy about the weather at our New York Shelter, which is dipping into the thirties at night, although it beats not having any food. This group is part of the nearly 200 animals seized from a sanctuary in Polk County, a sad situation from which we also took in our beautiful new steer resident Isaac.

All of the chickens from this group are debeaked, including the roosters. The roosters are likely leghorn or Red Star (a type that is part leghorn), and are likely from a closed egg facility. This is where our debeaked roosters usually come from.

“I’m so happy. Sometimes the face you are resting with is not always expressing what you feel — that’s a fact!”

Like Isaac, these birds are all underweight, and at the time of their rescue, very thirsty (as can be observed in PETA’s heartbreaking undercover footage that led to the rescue). They have a few health issues, which we are currently working to resolve. These issues mostly stem from improper nutrition and neglect, but also from a previous mycoplasma infection.

Again, these birds are debeaked and in horrific feather condition. Some of their feather issues are the result of untrimmed rooster spurs, but clearly due to nutritional issues as well. Like many of the other flocks who have arrived at Farm Sanctuary, this group is a mix of breeds.

The most recent and largest group was rescued this past week by Mike Stura of Skylands Animal Sanctuary & Rescue. These 210 chickens were being raised to be organic-egg layers at a large farm that was also growing and trying for certification of their produce. After working toward this and waiting too many months for USDA approval to be licensed as organic, the farm owner decided to stop feeding the chickens.

Australorps, Rhode Island Reds, Buff Orpingtons, Sex Links, and Laced Wyondottes are the collection of breeds being used in this wannabe “organic egg” and produce farm.

Thankfully, a tenant on the property, who had been helping the owner in his efforts to achieve this certification for the farm, could not stand by and let the chickens die of starvation. But unable to afford to feed 200-plus chickens (there were originally 300, but many were killed by wildlife), she fed them the rotting vegetables from the field and their own eggs. Knowing that she would soon be moving, leaving the chickens without an advocate, she contacted local rescues, who in turn contacted Mike, who reached out to us.

You can see the lovely Buff Orpington rooster, with his much larger comb, surveying his lady friends. He is one of two roosters out of the 210 chickens who recently arrived.

After a late-in-the-day pickup and the capturing of the 210 chickens (many of whom had been running loose), the birds arrived for a midnight drop-off at our New York Shelter and were checked the following day.

Late-night arrival, and the chickens beginning to settle in. They quickly ate full troughs of feed and drank a whole lot of water, then settled on their perches to sleep.

During those initial checks, we found a variety of health issues. These included injuries and, of course, emaciation, but also the sad realization that these very hungry birds had been eating each others’ feathers until many of them were bald. At first, we blamed this on the roosters or just normal molting, but in fact, much of the feather loss here was due to the birds needing nutrients and eating feathers out of desperation.

Garbage left in bird areas (or with any animal) can lead to injuries like this one on one of the Laced Wyandotte girls. Hopefully she will not lose the tip of the toe.

Some of the feather-picking and -eating led to more serious injuries, as was the case with this sweet little Buff Orpington gal.

Some of the hens are far more bald than others, and some of the feather-picking also ed to more serious injuries. Of course, they also continue to eat their own eggs (they jump on them almost violently), so very few eggs remain when we come to collect them in the morning. Thankfully, here they will have their nutritional needs met, and we hope that they will snap out of the behavior they have developed.

“Have you seen my feathers?“ A sweet little Australorp gal checking out what her little red neighbor is doing.

These birds also arrived with a heavy internal parasite load, which we are currently treating. Soon, they will be fully recovered from their ordeal and ready to go to their new homes. And the good news is that, in spite of all they have gone through, the majority of these hens are already coming around and getting super-friendly.

Birds of a feather flock together, and these gals are no different. Most of the breeds seem to stick with their own breed (even the birds who are missing most of their feathers). Likely, they came in different groupings when they arrived at the farm.

One of the lovely Sex Link girls, many of whom have become very curious and friendly already.

So if you are interested in adopting any of these incredible birds through our Farm Animal Adoption Network (and really, who wouldn’t be?), please check out our home adoption policies and fill out an application here.

Many of the birds have turned out to be very sweet, like this lovely little Buff Orpington hen.

If you are already a FAAN adopter, let us know if you are able to give a home to any of these beautiful hens (and of course, don’t forget the roosters), and join our amazing Chicktober Fest and a celebration of these incredible birds!