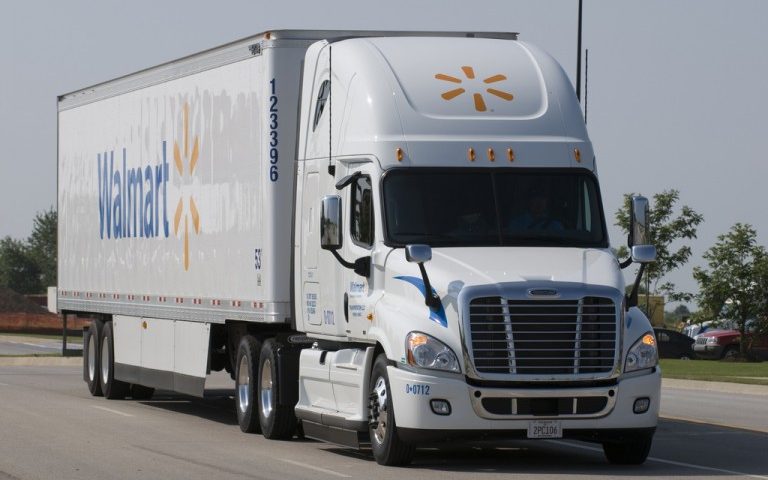 Five years ago, President Obama announced final fuel efficiency and greenhouse gas standards for heavy duty trucks. These new Clean Truck standards are helping to keep Americans safe from climate change and from unhealthy air pollution, reduce our country’s reliance on imported oil, and save money for both truckers and consumers.

On the fifth anniversary (August 9th) of their release, it is unequivocally clear that this program has been an enormous success for manufacturers, truck fleets, freight shippers, and the American people. It is also clear that more is needed and that more is possible. One of Walmart’s aerodynamic trucks

The first generation Clean Truck standards were created with the broad support of the trucking industry and many other key stakeholders. Among the diverse groups that supported them were the American Trucking Associations, Engine Manufacturers Association and the Truck Manufacturers Association, the United Auto Workers — and of course EDF. With the benefit of five years of hindsight, it’s clear that this support was well deserved.

The Clean Truck standards went into effect in 2014, which was a banner year for new truck sales. These new standards drove a wave of innovation for fuel efficiency. Cummins brought forward an engine that was seven percent more efficient. Volvo improved its engine by three percent compared to just the previous year’s model. Numerous component manufacturers brought forth new fuel saving solutions.

We are now seeing this same pattern repeat itself as manufacturers announce their 2017 product lines. Volvo just introduced an engine capable of improving fuel efficiency by 6.5 percent over its 2013 model in part because of its use of waste-heat recovery. Cummins base 2017 engine is three percent more efficient than its 2016 engine and it offers a model that is 10 more efficient than one made just five years ago.

The progress we made toward fuel efficiency in 2014 and 2017 is the result of a Clean Trucks program that strikes an important balance between protective, long-term standards and the ability of manufacturers to bring new solutions to market. As Martin Daum, president and CEO of Daimler Trucks North America has noted, these standards “are very good examples of regulations that work well.”

The new trucks built under the 2014-to-2018 program are delivering tens of billions of dollars in savings for truck owners. Individual consumers are benefiting too, as passed-through truck fuel use expenditures cost Americans more than $1100 per household annually.

The U.S. Environmental Protection Agency (EPA) and Department of Transportation (DOT) are now building on this record of success with a new round of standards. These second-round standards were proposed last summer and are expected to be finalized soon. The proposed second-round standards were a good first step, but significant opportunities remain to strengthen and improve on the proposal. Chief among these is the need for a more robust engine standard.

The U.S. Energy Information Administration released a recent analysis of the emissions impacts of the 2021-to-2029 standards as proposed. It found that the standards would cut direct emissions by 100 million tons in 2040 compared to a business-as-usual scenario. Even with these impressive reductions, freight trucks are projected to directly emit nearly 400 million tons of climate pollution in 2040. This doesn’t have to be so.

We are seeing significant investments in potential solutions and technologies that can dramatically reduce future truck emissions.

High-profile examples of this innovation include:

By building on the foundation of the 2014-to-2017 standards with truly strong 2021-to-2029 standards, EPA and DOT will provided needed wind in the sails to get breakthrough innovations like these to market. The benefits have been, and will be, far reaching — in fuel cost savings for trucker and shippers alike, job creation, pollution reductions, and the technological innovation that is the foundation of a strong, vibrant economy.