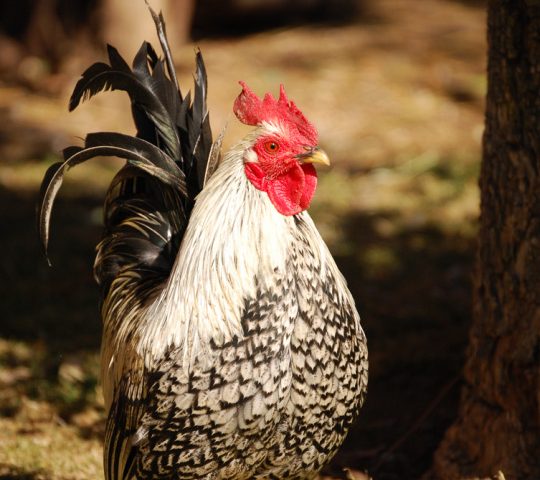 For the past six years, a small but mighty rooster named Dandypants has ruled the roost at our Southern California Shelter. As the shelter’s longest-standing rooster resident, Dandypants is given ample and due respect by the other roosters. Many have tried to steal his throne to no avail. After all these years, he has to defend his throne less, and rules with much less of a heavy hand. Yet rule he still does and must. When new hens are introduced to the flock, Dandypants makes sure to properly introduce himself to them immediately. If another rooster has made it to the new girls first, Dandypants quickly hustles them away with a menacing glance. 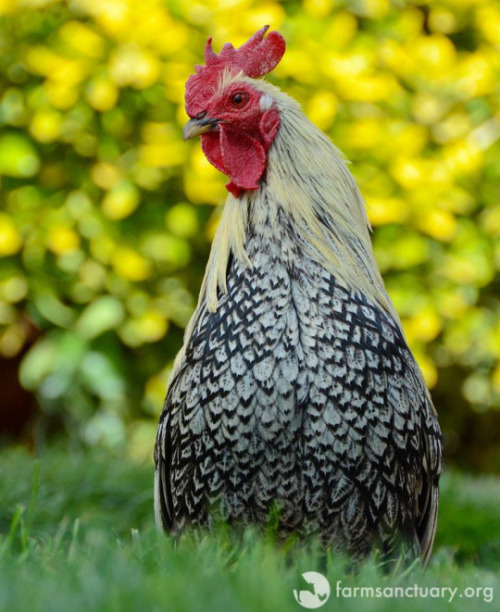 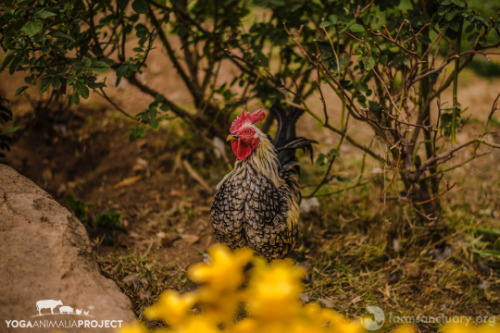 What makes Dandypants’ reign so unique is his diminutive stature. Mr. Pants weighs all of three
pounds, and yet has been known to put roosters three times his size in line. After his years of ruling with feisty gusto and might, Dandypants now enjoys the spoils of ruling merely through intimidation. Much larger and younger roosters step aside when they see him strut toward him.

Six years ago, Dandypants could not have known that he would one day rule over the sanctuary’s chicken residents. He was lucky to be alive. He’d been found wandering around the urban streets of Los Angeles and taken to the local municipal animal shelter. After the mandatory stray hold period, he was made available for adoption. From there, he could have ended up in anyone’s hands, but the likely outcome was that he’d be euthanized at the shelter for space. This is the sad fate for thousands of roosters every year due to a staggering rooster overpopulation problem caused by the urban backyard-chicken phenomenon.

Dandypants is one of the few lucky ones to have received a reprieve. But rescuing him was only the first step; the next was bestowing upon him a name befitting his beauteous style. Although this dapper
gentleman does not have a mirror, based on his cocksure strut we are certain that he knows how handsome and beautiful he is.

Dandypants’ beauty and Napoleon complex blend wonderfully at night in the coop. There, he is often
the lone rooster found at the center of a perch filled with lovely ladies. Dandypants prefers the larger ladies, and can usually be found snuggled in tight between a couple of turkey hens. To everyone around, he seems to proclaim this coup in the coop as the pinnacle of his reign.

A smaller and mightier rooster we do not know and cannot imagine. This fancy-pants-wearing rooster has stolen our hearts, and the hearts of many a hen!

While Dandypants’ story has a happy ending, there are so many other roosters like him who don’t share his good fortune. We hear every day from well-intentioned hobbyists who find themselves with roosters they’re unprepared to care for, or prohibited from keeping due to local ordinances.

Please share Dandypants’ story to help spread the word about this sad side effect of the backyard-chicken trend. And if you have the resources and rooster-friendly zoning to offer a loving permanent home to a rooster in need, please consider becoming a part of our Farm Animal Adoption Network (FAAN)!