And Fairy lives happily ever after.... 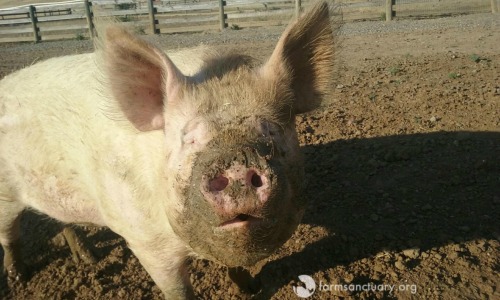 Fairy in her signature mud mask. Two peas in a pod: Fairy and Sabrina

Fairy’s Tale: From Backyard Butcher to Happily Ever After

Once upon a time there was a porcine princess named Fairy. While she is today safe and happy at Farm Sanctuary, her beginning was far grimmer than even the darkest of Grimm’s fairy tales.

There had been a neglect complaint in San Gabriel Valley California. An animal control officer went in to investigate what she discovered was actually a backyard butcher site. She found pigs goats, and a horse who were still alive, but who had been forced to stand by and witness their family members slaughtered in front of their very eyes. The “undesirable” parts of the slaughtered pigs had been fed back to family members in a feeding area overrun with maggots. The officer had not expected this to be a seizure case but it quickly turned into one.  Luckily, Fairy and her friends would find their way to Farm Sanctuary.

Today, you can find Fairy and her friends living it up and loving life at our Northern California Shelter in Orland. Fairy loves to root around the spacious pastures, even disappearing for moments in the winter time when the grass is tall enough to hide her from sight. She loves to take a dip in the wallows we’ve custom-built for her and her pals.

Fairy in her signature mud mask: A gal’s gotta keep her skin healthy and vibrant after all!

Fairy also enjoys snuggling in the soft straw next to her family members. She loves to snuggle with Sabrina. We often refer to them as cuddle butt’s because they sleep right next to each other with their faces in the straw so you can only see their two bottoms in the straw (as they demonstrate below).

Fairy is often one of the first pigs to rise in the morning, taking advantage of the sunrise hours to accomplish some rooting around in the pasture before breakfast time. It is not uncommon for the live-in staff members to look out into the pasture and see Fairy’s signature perky ears as being the only ones up in the early dawn.

Life is good for Fairy. And we hope that this porcine princess has been able to forget most of what happened to her in that hell. We know it will be impossible for her to ever truly forget what she endured, but we have worked for years to ensure she feels as safe as she possibly can, and we will continue to work for her on a daily basis to ensure a happily ever after.

Please share Fairy’s tale. Together, we can encourage awareness and understanding about farm animals as someone, not something. With your support we can continue to promote compassionate vegan living through rescue, education, and advocacy efforts. A compassionate world begins with you!