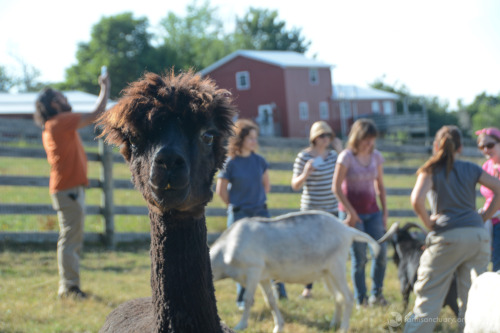 It was an exciting week for Farm Sanctuary’s Communications and Marketing team. Five members of the Los Angeles office contingent flew out to New York to visit the animals they see every day in photos and video from afar. And believe it or not: They were starstruck! Stevie photobombs as the Comms team records a Snapchat. 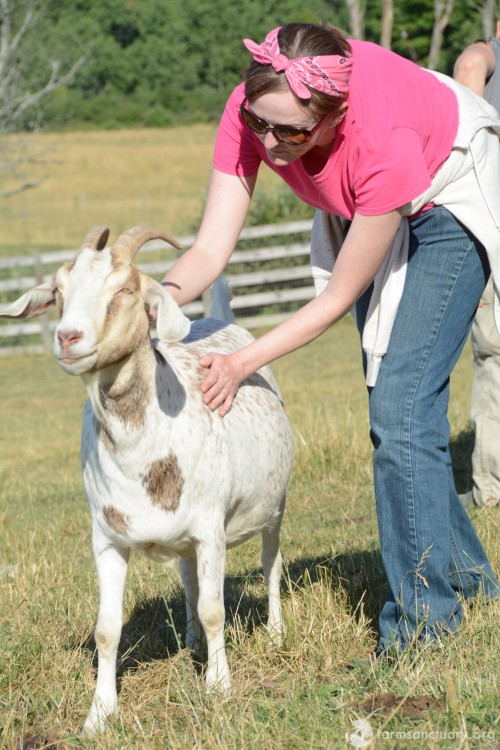 Maxie enjoys a massage from Lindsay B. 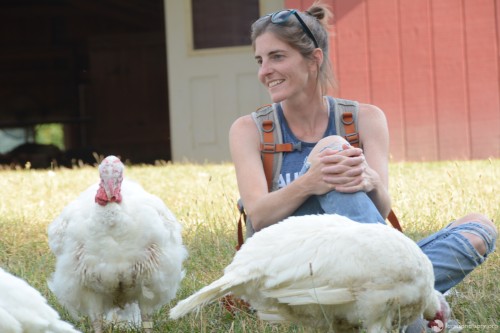 Jackie turkey and friends were crankier than usual due to molting. But Chrissy respected their need for space. 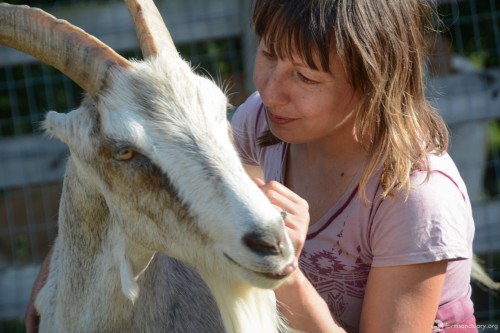 Patrick took a liking to Lindsay M. And the feeling was clearly mutual. Caitlin cuddles Widdle.   Here were some of their favorite Farm Sanctuary celebrity encounters. 1) Keeping Up With the Cattaraugus Lambs Daniella and Zepha’s lambs, Jack and Bob Barker and Laura and Cindy, respectively, were quite the media spectacle for Comms team members Jae Ramos, Email Marketing Specialist; Lindsay Morris, Senior Manager of Marketing & Communications; and Chrissy Wahlstrom, Visual Communications Coordinator. Jack and Bob Barker weren’t afraid to “C’mon down” to Jae and his camera. Similarly, Izzy’s daughter Vera-Jo and Zepha’s girl Laura seemed born ready for their close-up. Laura and her twin Cindy were after all filmed during birth… 2) Snack Time for Hudson Valley Goats The LA Comms team had also never met the individuals rescued among nearly 200 from a Hudson Valley-based backyard butcher operation. Luckily, these residents (including Olive and Aretha and their freeborn daughters Maggie and Lulu and Min (respectively); Tatiana, and Archie) have for largely settled into their own flocks and have overcome most of the fear with which they’d arrived. And they were really happy to see people who could reach willow branches. Everyone wanted their own pic of Maggie. And Maggie was thrilled to see them, especially when they could fetch her a leafy green snack. Editor Lindsay Barnett extends a branch to Olive. And Maggie wanted Mom’s leftovers. Maggie and Olive have mastered the art of stretching for food, but Lindsay M. offered a bit of assistance. Tatiana appreciated Jae’s gesture. And she and the others made some of the team shed tears of joy to see just how the much life has changed for these once-terrified and tortured beings. 3) Beholding Benedict’s Wheels But this week’s truly inspiring sight was that of little Benedict goat, whom was among the sickest of those saved from Hudson Valley due to neurological issues stemming from a meningeal worm and damage to his spine. We recently let him try out a wheeled cart we’ve used for other physically-challenged goats, and the results really speak for themselves as you can see in the following video from Thursday’s Live Facebook video chat. 4) Sizing Up the Gentle Giants It’s not often that LA folks find themselves between a couple of enormous bovines, but as Lindsay M. demonstrates with Moo and Dennis, the team found themselves doing just that. Meanwhile, Lindsay B. found a friend in Leo. And Tweed was not overlooked among his Holstein brethren. Ari, who is not only one of the youngest but also one of the tallest, went in for a neck hug with Jae. We also paid a special visit to the elder stateswoman of the special-needs herd, Kirsty, who this year turned 28 and really enjoyed some scratches from Chrissy and Lindsay M. 5) And Honoring the Other Giants It was Kim Gordon’s big day on Friday; she’s celebrating six years at Farm Sanctuary! Jae was among those who congratulated her. And Nikki’s daughter Portia found a fan in Lindsay B. Meanwhile, it was sweet dreams for Fiona (with hug from Lindsay M.). Ah… the Farm Sanctuary life…. For these City Slickers, it was worth writing home about..and sharing here with you and all of who have supported our mission and important rescue, shelter, education, and advocacy work for the past 30 years. Until next time…. Thanks for putting your best foot forward and compassion first!