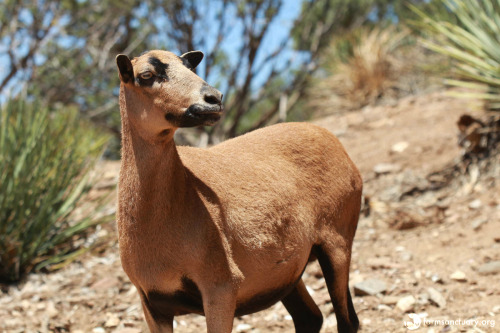 Beautiful, slight, and fawn-like in appearance, Felicity is a Blackbelly Barbados sheep. Like a fawn,
she is skittish and shy, extending to a wariness of people. But at Farm Sanctuary, she is free to be just who she wants to be — whether or not she wants much to do with us. 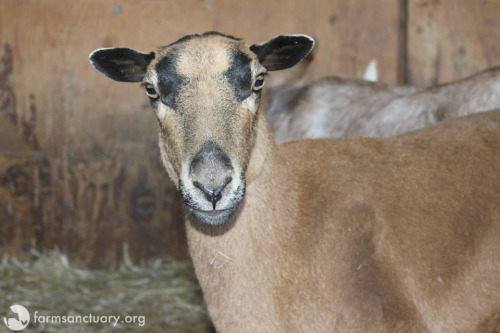 Felicity with her buddy Yoda.

Felicity was among thirteen sheep, a goat, and a calf rescued from a backyard butcher in Southern California in early 2013. Most of the sheep were elderly, emaciated, terrified, and suffering from a variety of ailments, including severe upper respiratory infections, fungal skin infections, parasites, sores, lacerations, mastistis, severely overgrown hooves, hoof rot and foot abscesses, and one horribly torn and infected ear. All
appeared to have been bred repeatedly. We suspect the butcher used these aging sheep to breed lambs for his customers and probably killed the babies within earshot of their mothers. Mother sheep love their lambs fiercely, and losing their sons and daughters, and in such a brutal way, must have been torture for them.

Twelve of the sheep and the calf were transported to our Northern California Shelter to receive more intensive care and rehabilitation. Felicity, however, remained at the Southern California Shelter. She was unlike the other sheep in both breed and bond. Unlike the others, Felicity was the only Blackbelly Barbados, a type of hair sheep; the other members of the group were various varieties of wool sheep. But this difference in breed was not Felicity’s most notable distinction. All of the other sheep were closely bonded with one another. Felicity, however, was an outcast.

Taking refuge in a shady spot.

She was not alone, though. Instead, Felicity was bonded with Claire, the lone goat from that rescue. The two were inseparable. From the beginning, Felicity was terrified of us and used the bigger and bolder Claire as her caprine shield. Claire would upset easily when we had to handle Felicity to provide her care.

Claire, back, and Erika, front, snuggling while Felicity observes from a distance. (Photo by Kim Kaspari.)

Shortly after Claire and Felicity’s rescue, Claire gave birth to Erika. Although we ordinarily would separate mom and babe from other adults, Felicity stayed with the new mother and baby. Felicity and Claire screamed and cried in terror when we attempted to separate them. From their screams, we understood the
traumatic memories that separation brought to surface for them, and we could not allow ourselves to add to their trauma. Of course, had Felicity posed any threat to the newborn, we would have had no choice but to remove her. Aunt Felicity hardly presented a threat, though. As any loving aunt, she treated young Erika as if she were her own, sometimes doting upon Erika even more than her own mom did. Felicity gained a friend in Erika, and she, Claire, and Erika became inseparable — so much so that the shelter staff began referring to the trio as “Flerika.” Flerika lived and loved one another as any great family (sans the dysfunction that sometimes comes with family life).

Felicity, left; Clare, center; and Erika, right, spending time together in one of their favorite spots. (Photo by Kim Kaspari.)

After several months of loving care from her mom, aunt, and the shelter staff, Erika was large enough to introduce to the main goat and sheep herd. Felicity and Claire made their debut at the same time. As we
predicted, the threesome remained a closely bonded family unit. They navigated their new territory and new friends as one body, never leaving each other alone. Together they walked, ran, and climbed around
as a singular unit, moving in unison more like a giant school of fish than a pair of goats and a sheep. Though Claire and Erika warmed quickly to their new goat and sheep friends, Felicity did not. She remained vigilant and wary, wary even of her own kind.

When you’re wary of those outside your circle of friends, it helps to have a very tall buddy to seek refuge with! (Photo by Alicia Pell.)

Slowly, though, with time, Felicity expanded her friend circle. First up was Yoda, our lovable resident llama. Yoda originally befriended the whole family. Felicity, Claire, and Erika would follow him around, exploring the hillside. Now that Erika is a young adult, though, she and Claire no longer spend much time with Yoda, but Felicity has not forgotten her lanky, split-lipped friend. Instead, she and Yoda have a flourishing interspecies relationship.

Pals Yoda and Felicity sharing a nap together on the hillside. (Photo by Cameron O’Steen.)

Felicity and Yoda often spend time together, relishing all of the joys of life — walking along the hillside, grazing, napping, and inspecting the property. Felicity enjoys the added bonus of being able to hide under her long-legged friend — an especially appreciated benefit for this anxious girl.

Felicity likes to have friends in high places. (Photo by Alicia Pell.)

Based on Felicity’s tight bonds with members of other species, we began to wonder if she understands that she is a sheep, or if she wants to be a sheep. We judge not; we love and respect her regardless of who she thinks she is. Then, Felicity began to warm to Lucky, the only other Blackbelly Bardados residing at
our Southern California Shelter. When Felicity isn’t palling around with Yoda or hanging around with her adopted goat family, she’s likely accompanying Lucky somewhere on the hill. More and more frequently, the two are seen spending time together.

Felicity, back, with her friend Lucky. (Photo by Kim Kaspari.)

Maybe Lucky brings Felicity comfort because he reminds her of her long-lost biological family. Or perhaps she simply finds comfort in Lucky’s presence because he exudes the calmness she seeks. Our bias connects Lucky and Felicity by breed, but Felicity exemplifies anti-breedism and anti-speciesm in the family she
chooses. And family is important to Felicity. She thrives around those she loves; it is only when she is with one of her adopted family members that she lets her guard down. Thus, we do not often find her alone.

One day, we hope that Felicity will choose us as family, but until then, we rejoice in each new bond she forms, evincing the expansion of her circle of trust. We currently reside in the periphery of that circle. Felicity now relaxes in our presence; in the beginning, she was always on high alert. She now takes treats from us; in the beginning, she could not be lured into our vicinity with any form of reward. Baby hoof steps, baby hoof steps. With glimpses of her trust, we forge on, reassuring Felicity that she is safe; her adopted family is safe; and they will live out their lives at the sanctuary together.

So although Felicity is not likely to be among the sheep and goats eagerly greeting visitors anytime soon, we suspect that she will one day grace us with her trust — and that will be a wonderful thing indeed.

Please share Felicity’s story. Together, we can encourage awareness and understanding about the rich emotional lives and strong bonds of family experienced by sheep like her. With your support, we can continue to promote compassionate vegan living through rescue, education, and advocacy efforts. A compassionate world begins with you!