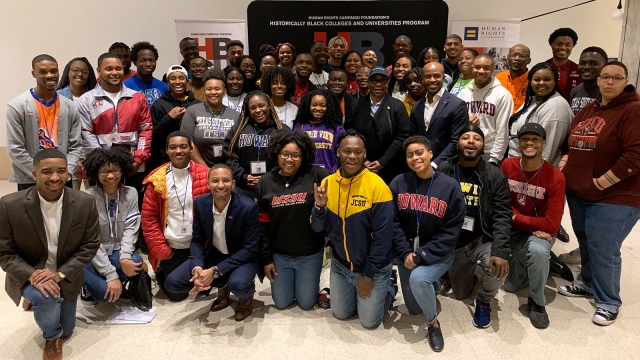 The HRC Foundation convened nearly 50 students for its 14th annual Historically Black Colleges & Universities Leadership Summit. For more than a decade, HRC has held an annual summit for LGBTQ student leaders from many of the nation’s historically Black institutions. The summit caps a year during which HRC’s HBCU program has launched a number of new initiatives, including a series of on-campus engagement events and the creation of #HBCUOutLoud Day that celebrates the visibility, awareness and stories of LGBTQ students, staff and alumni of HBCUs.

“We were absolutely thrilled to welcome these student leaders for the 14th annual Human Rights Campaign HBCU summit,” said HRC President Alphonso David. “After expanding the HBCU program to campuses across the country, it is thrilling to see so many students come together, learn from each other and increase their collective strength as advocates, particularly in a climate where the federal government is threatening their very existence. The commitment and dedication demonstrated by these young leaders to honor their identities and dreams is inspiring. We look forward to having them return to their campuses with a renewed commitment to fighting for equality and inclusion.”

David shared a special message with the HBCU students about their power, with the simple message, “We need you more than you realize.” Watch his remarks here.

During the summit, participants developed leadership skills in the key areas of self-awareness, awareness of others, courageous actions and collaboration to advocate for LGBTQ equality and other social justice issues. Topics covered included the intersection of race and sexual orientation; mental health and wellness; organizing and the Black community; inclusive leadership; and harnessing political power.

The five-day summit is the only leadership development and advocacy training program that empowers LGBTQ HBCU students to act as change-agents on their campuses and in their communities. Students leave with the skills and competence to lead resourcefully and effectively through the intersections of race, religion, gender identity and expression, class and sexual orientation.

The HRC Foundation’s HBCU Program mobilizes and supports HBCUs in enhancing policies and services that promote excellence in LGBTQ inclusion, equity and engagement. The program is supported by The Coca-Cola Foundation and the David Bohnett Foundation. For more information about HRC’s HBCU Project, visit http://www.hrc.org/hbcu.