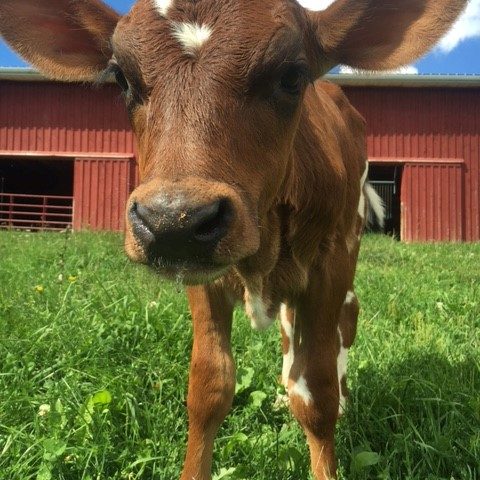 Jerome calf came to us from a small dairy herd. A worker at the farm fell madly in love with him at first sight which, as you can imagine from these pictures and videos, is impossible to avoid. She could not imagine sending him to the fate that meets male calves born into the dairy industry: to be sold to veal or meat buyers. 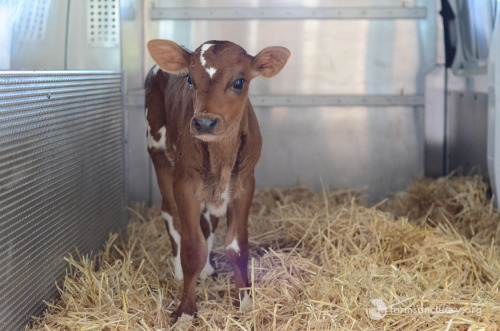 Welcome to your new life, Jerome!

For Jerome, Farm Sanctuary life means lots of time to run and play. Mom Liz wasn’t too sure at first, but how could you say no to this little face? Jerome investigating his new digs, right down to every flower! 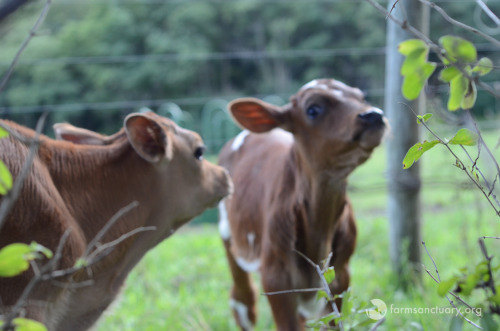 It’s happily ever after for Liz and Jerome. (And Cashew, of course!)

She knew that Jerome only had a few weeks before he would go to the sale, and the owner of the farm, thankfully being sensitive to her dream for this calf, said he would relinquish him to a home if she could find one.

So she called Farm Sanctuary.

And what perfect timing that was!

Just a few weeks prior to Jerome’s arrival, another calf, with his mother, came to our New York Shelter. Cashew and Liz also arrived from a small dairy, but unlike Jerome and his mother, the pair had been able to stay together.

Liz had an issue, however. She arrived producing more than 60 pounds of milk a day for her one very tiny little Cashew. She had mastitis in all four quarters and required weeks of treatment.

So back to Jerome. When we went to pick him up, we were taking him away from his mother. This was traumatizing both for baby and mom, and something that was obviously very difficult for us to do. In this case, however, his fate was decided: It was either sanctuary with us, or he was going to be sold for meat. Mom was never going to be part of his future.

So this tiny calf arrived at our shelter in Watkins Glen, NY, with no mother.

He was frightened and depressed, but then he saw where he was going… and who was just on the other side of the barn door.

At first, Liz was unsure of this little guy. But after a while, she decided that tending to another baby may not be such a bad thing.

She adopted the little one as her second son.

His new brother, Cashew, was thrilled to have a new playmate! And play they did; mom even joined in.

Now the three of them are a tiny little herd — a family. And for Jerome, this is a family that will never be taken away.

Please share this story and help us honor Jerome and his adoptive family, who will live out their lives in peace, without the pressure that comes when animals are raised for profit.

Together, we can encourage awareness and understanding about such unique individuals as well as the unfortunate truth about the dairy industry. With a growing number of delicious dairy-free options and recipes, it’s never been a better time to make the switch. And it is one of the easiest ways to honor the cattle for whom Jerome serves as an ambassador.

Liz has the cleanest ears now that Jerome’s around.