After touring with her boyfriend’s band, Lanore Hahn was anticipating a relatively uneventful return journey back to her house in Wisconsin when fate intervened in the form of a tiny piglet now named Kim Gordon. On a back country road in Mitchell, South Dakota they spotted Kim running around in the middle of the road, clearly injured and scraped up. Based on the location this little piggy was on the way to a nursery barn (step between the farrowing house where they are born and the finishing barn where they are fattened up). 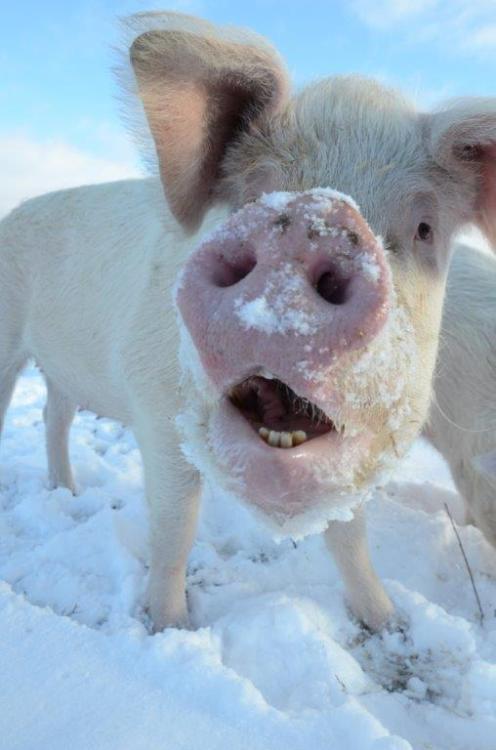 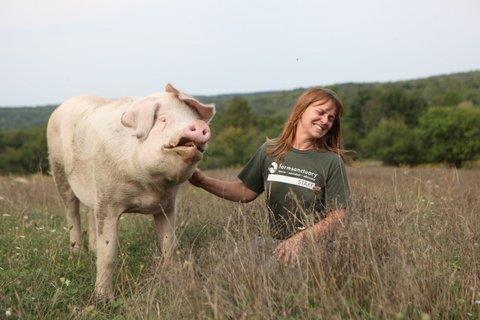 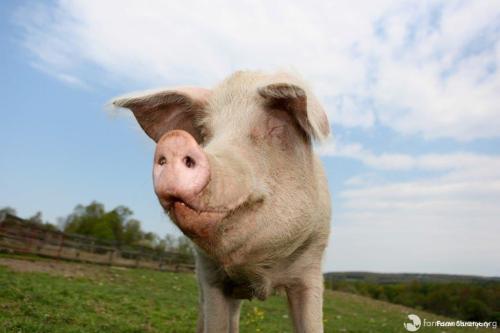 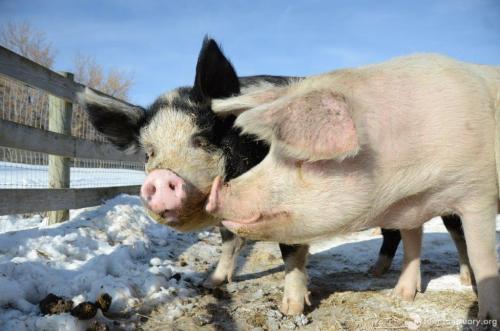 Look into my eyes and tell me I'm not someone special!

Kim Gordon performing with Joan Jett and Fiona While the exhausted baby slept, the compassionate couple embarked on a mission to uncover her origins. After checking with several local farms, they called animal control authorities who deployed an officer to meet up with them. The officer confirmed that there were no pig farms for miles and surmised that, given the piglet’s severe sunburn and painful road rash, she likely fell off the back of a transport truck. He then informed Lanore that should she hand Kim over to animal control, the 6-week-old baby would be shot and killed. After hearing those words, Lanore knew that she had no other choice: Kim was coming home with her. Once at their home Kim began to vastly improve and this 12-pound little girl – gradually introducing her to solid foods (including squash and baby corn fresh from the garden), massaging her wounds with antiseptic lotion, and giving her plenty of much-needed T.L.C. Though Lanore and her boyfriend fell in love with the little pig, they knew they could not offer the one thing Kim so desperately needed: a permanent home. That’s when Farm Sanctuary stepped up and offered to take Kim in. Six years have  passed since that fateful day, and Kim continues to change hearts and minds with her beautiful eyes and rock-star (sometimes diva) personality. Here are a few of our favorite pix and Kim memories: Kim had a jam session with Farm Sanctuary’s Communications Coordinator Michelle King and music power couple Colbie Caillat and Justin Young. Discovering that not everyone wants to play. Rootin’ and rollin’… she still loves celebrating in the mud as you can see in this recent video.   ‘Dirty Boots’ and snout Just what was that ‘Little Trouble Girl’ up to? A‘Teenage Riot’ in the snow… and in the mud! Put your right foot in, put your left foot out… Excuse me.. Closing those precious eyes and breathing in the sweet Farm Sanctuary life. Hanging with her girl Joan Jett With humanimal Jae Ramos earlier this week. This ‘Superstar’ has clearly rocked our world. And a rescued pig living at Farm Sanctuary, like Kim Gordon, has so much to smile about. She, like all pigs, deserves a chance to roam pastures, root for treasures, and receive loving belly rubs to her heart’s content. Why should a pig’s life be any different? Please share Kim Gordon’s tale. Together, we can encourage awareness and understanding about farm animals as someone, not something. With your support we can continue to promote compassionate vegan living through rescue, education, and advocacy efforts. A compassionate world begins with you!