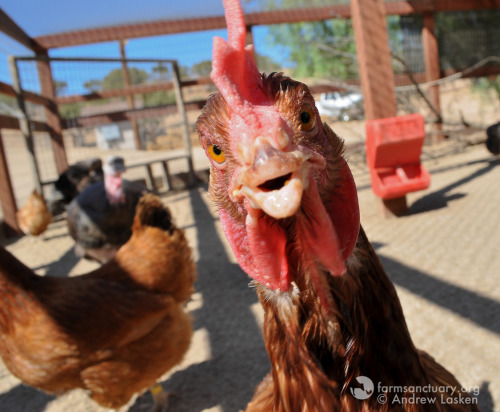 May, June, and July represent a time of year filled with awakening, abounding new growth, and the celebration of freedom, and three very special  residents of our Southern California Shelter embody these celebrations. June hen checking out the camera during our recent Twilight Tour event. (Photo by Andrew Lasken.) 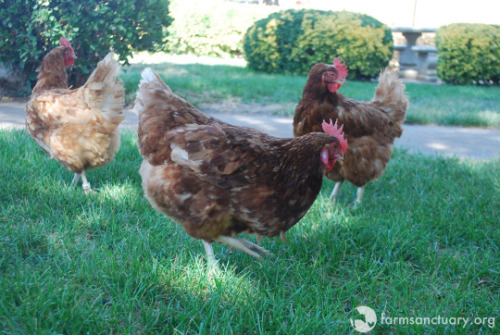 July (front and center), May (left rear), and June (right rear) hanging out in the courtyard together. 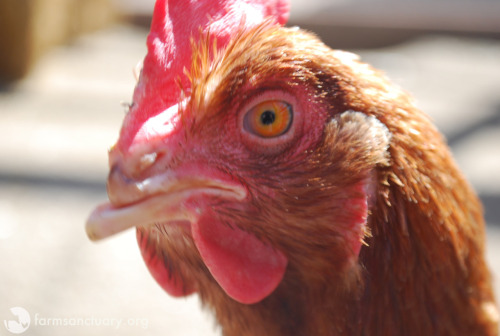 May’s profile shows just how severely debeaked she is. July and May exploring together at our Southern California Shelter.

May, June, and July having fun in the courtyard!

The tradition of naming hens after months began with April, who was rescued on April Fool’s Day 2014 by a volunteer from a local municipal shelter. April was a debeaked Red Star hen who had been found wandering around a rural neighborhood. Red Stars lay brown eggs and are commonly exploited in commercial production to do so. They are typically confined in battery cages, or tightly packed in warehouses with thousands upon thousands of other hens in so-called “free-range” farms. Due to the intense confinement that laying hens endure in the egg industry, they are debeaked as chicks to control them cannibalizing each other as a result of the stress of their unnatural living conditions. Because of April’s breed and obvious debeaking, we knew that at some point before she made it to the shelter, she had been exploited for eggs, likely at a commercial egg-laying facility.

April received a warm welcome at our Southern California Shelter, where she lived happily and freely for nearly two years until she sadly succumbed to cancer — an all-too-common and tragic fate for laying hens. April was a staff favorite — kind, loving, and sweet.

Within days of April’s death, another debeaked Red Star was available for adoption at another local municipal animal shelter. We immediately mobilized to rescue her, knowing that she, too, had likely spent the first couple of years of her life exploited in a commercial egg-laying facility. Shelter staff members unanimously decided to name her May, in remembrance of April.

May enjoying some attention from her humanimal friend Danielle.

May, like April, defied her exploitative, horrific past and proved to be kind and sweet. May was not fearful of humans, but rather immediately curious about us. She became an instant staff favorite as well.

Sweet May coming over for a visit.

Once integrated into a flock, she became the first to greet us every time we entered the aviary. And much like her predecessor, she begged us for attention, which we gladly bestowed (and continue to bestow) upon her. May would sit on our laps joyfully, and we joyfully accepted her attention.

June coming in for a close-up. (Photo by Andrew Lasken.)

Everything changed when June serendipitously arrived in June of this year. She, too, is a Red Star, and she, too, is debeaked. Unlike April and May, though, both her top and bottom beak are cut. June was not found in a shelter; instead, she was found running around the urban streets of Inglewood by good Samaritans. She, too, likely spent the beginning of her life horrifically confined in a commercial egg-laying facility. Then, between eighteen months and two years of age, when she was no longer producing regularly enough, she and thousands of her sisters were considered “spent” — economically valueless to the egg producers. After being roughly pulled out of their cages, most hens in this situation are brutally killed in gas chambers. Some are spared, only to be shipped off to live poultry markets to be sold cheaply, usually for soup stock.

June checking out the camera. (Photo by Andrew Lasken.)

We suspect that June escaped from such a live market. At the time she was found, she was covered in pin feathers — new feathers growing in their infant stage. Battery-cage hens often have bald patches all over their bodies from rubbing on their wire cages. After a couple of weeks of freedom out of these cages, feathers begin to regenerate. We therefore suspect that June had been out of a cage for at least a couple of weeks, and although there are not any battery cage facilities in Inglewood, there are live poultry markets. Thus, via educated guess, we deduce that June escaped such a market. Based on the state of her pin feathers, we further suspect that she survived wandering the streets for at least a couple of weeks. June is a survivor.

June on the lookout for snacks.

To survive is to exist; to thrive is to live — and June loves life! From the moment she arrived at Farm Sanctuary, she has been full of love for the staff. She even enjoyed sitting on a caretaker’s lap during her initial health check. While many hens squirm for their health checks, June gladly accepted and welcomed the attention.

Since that first day, she has captured everyone’s attention and love. When introduced to the flock, June and May became instant friends. They recognized each other as soul sisters, kindred spirits who both survived unspeakable horrors to become love. June and May hang out with one another frequently, and both enjoy their daily treats of fresh fruit and vegetables. June, however, has taken May’s place as the first hen to greet anyone entering the aviary, and she’s also likely to be the first one closely inspecting any guest.

June is curious about technology (and much more!).

Though she is less likely to be found snuggling on a lap, she will not leave a person’s side. She will incessantly peck at anything interesting — clothing, freckles, phones

— anything. June is mesmerized and enchanted by people, and we feel the same about her.

July, the third member of this happy trio!

In July of this year, May and June were joined by a third Red Star, appropriately and obviously named July. July came from the same animal shelter as April, and is also debeaked and a likely survivor of a commercial egg-laying facility.

July, too, is affectionate, enjoys treats, and is interested in people, though she is slightly more subdued than June and May. Needless to say, May and June graciously accepted her immediately upon meeting her, and the three are never too far apart from one another. We never have to look too hard for any of them, as they all come quickly and eagerly when they hear any person approaching. Unlike some of the other chickens, they seem genuinely happy to see us whether we are bearing treats or not.

What is remarkable about May, June, and July (and the late April) is that their will to survive led them to escape — and this will to live has led them all to thrive and love. Sadly, we know that all of the three hundred million hens exploited for eggs annually in the U.S. are individuals who also want to live and thrive. Until the day when their exploitation ends, May, June, and July are beautiful ambassadors for their millions of less fortunate sisters, teaching everyone who meets them that every chicken is someone, not something.

Please share May, June, and July’s stories to increase public understanding about the rich emotional lives of chickens like them and raise awareness of the abuses they routinely endure in the egg industry. With your support, we can continue to promote compassionate vegan living through rescue, education, and advocacy efforts. A compassionate world begins with you!