HRC and Equality North Carolina released the results of major post-election polls conducted by Greenberg Quinlan Rosner Research showing that the majority of the electorate — including voters that supported Donald Trump and Mike Pence — has in no way backed down from supporting LGBTQ equality. Additionally, North Carolina polling found that the anti-LGBTQ HB2 was the critical issue leading to Governor Pat McCrory’s defeat — the only incumbent governor from either party to lose on Election Day. The HRC and Equality NC survey of 500 North Carolina voters found them opposed to HB2 by a 62 to 30 percent margin. HB2 was also listed as the leading reason to vote against McCrory — with 57 percent citing HB2, 17 points above any other issue. 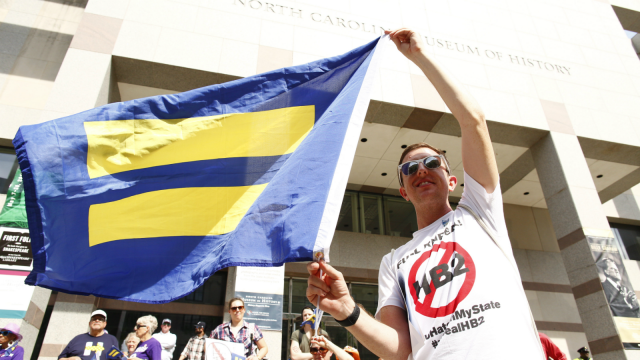 Gov. McCrory ran approximately 63,000 votes behind Donald Trump, 96,000 votes behind Sen. Richard Burr, and more than 225,000 votes behind his party’s own candidate for agriculture commissioner.  According to the polling, both Trump and Burr won the Independent vote by 21 points, while McCrory won by only 9 points. Other victories for equality include Josh Stein for Attorney General, as well as four challenger races that also declared victory: Cynthia Ball (D), Chaz Beasley (D), Joe John (D) and Mary Belk (D). HB2 was the top issue in each of these races.

“This research is proof that when it comes to LGBTQ equality, hearts and minds remain forever changed and on our side. Nowhere is that more clear than in North Carolina, where voters soundly rejected Pat McCrory and sent a clear signal that anti-LGBTQ politicking is now a liability to candidates, no matter their party,” said HRC President Chad Griffin. “Barely 10 years ago, Republicans – and some Democrats – running for governor were campaigning their support for state bans on marriage equality. But today, as McCrory has proven to the nation, promoting anti-LGBTQ discrimination will cost you an election. There is no doubt that Americans have moved inexorably in the direction of equality and have no appetite for hatred from their elected officials.”

“This polling data shows what we have seen and heard in our communities all over the state — HB2 is bad for North Carolina,” said Equality NC Executive Director Chris Sgro. “Pat McCrory refused to listen to the people of North Carolina and as a result, the people stood up and ousted him out of office. That means that a champion of equality will replace one of the worst anti-LGBTQ politicians as the highest officeholder in our state. North Carolinians deserve a Governor that represents their values. There is much to be done in order to support Roy Cooper’s efforts to repeal HB2 and create statewide non-discrimination protections. We are looking forward to working with Governor-elect Roy Cooper to repeal the vile HB2 and restore North Carolina’s reputation.”

A separate national survey of 1,100 voters found a massive increase in support for marriage equality compared to the 2012 election. A 61 percent majority of voters now support marriage equality, compared to 50 percent after 2012. There’s also significant support for comprehensive legal protections for LGBTQ Americans. An impressive 69 percent of voters—including a 55 percent majority of Trump voters—support the Equality Act which would broaden—not contract—equality in this country. Both the North Carolina and national surveys were conducted Nov. 6-8.