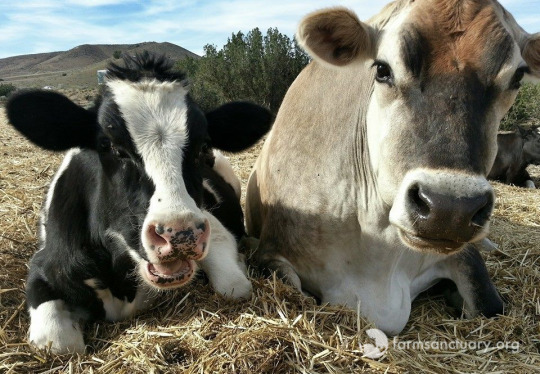 Anyone who has visited the Southern California shelter has met our beautiful mahogany steer friend Paolo. And, it’s hard to imagine anyone meeting him and not falling madly in love with him. Paolo is gentle, kind, and mellow. While weekend visitors spend their time admiring, adoring, and lavishing attention upon him, Paolo stoically accepts their affection. Ten years of living at a sanctuary have treated Paolo well and he
expects nothing less than love from the people he meets. 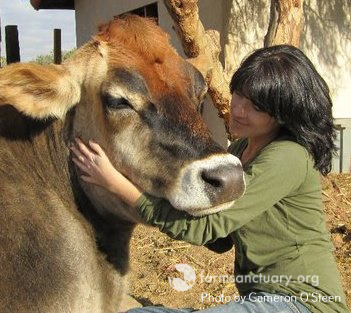 Snuggling in his earlier years with longtime humanimal pal, Alicia 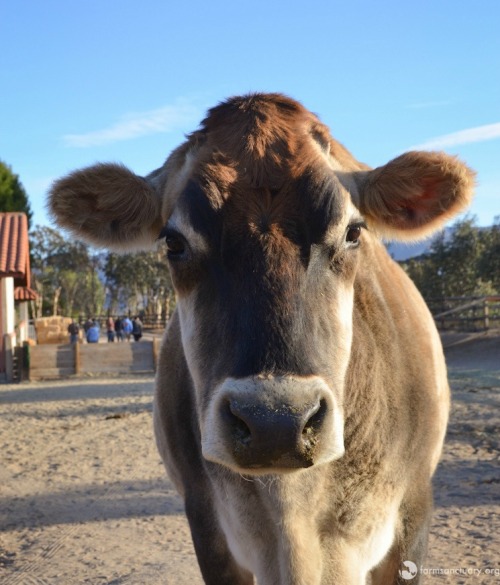 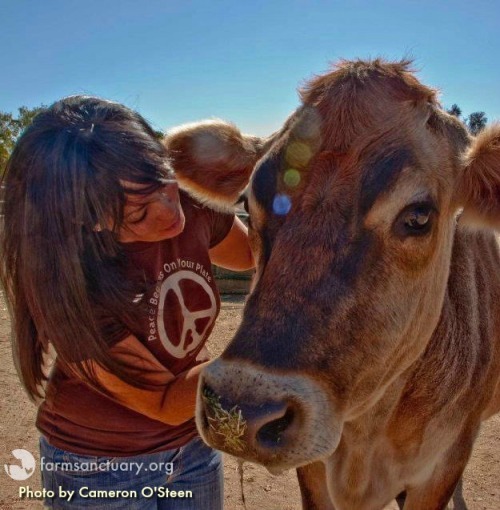 Paolo reminds us to pause and reflect.

Paolo’s journey began with a healthy and deserved distrust of humans. Paolo is a brown
Jersey, a cattle breed exploited in the dairy industry. As such, he was born to
a mom who wasn’t allowed to nurse him and who had to watch him cast aside
deemed useless as a male calf in the industry. Paolo likely then was sent to
auction and sold cheaply to be raised for veal or beef, which is the typical
fate of male calves born into the dairy industry. Thus, Paolo’s likely journey
began with fear, sadness, and forced abandonment.

Golden boy in his early years at sanctuary

From there, he landed at a small farm in Southern California, where he lived with
many goats. Paolo and the goats lived in a pen without any secure shelter. Coyotes
lived in the mountains nearby the farm and would often come down at night and
prey upon these vulnerable animals. One night Paolo was attacked by a coyote or
a pack thereof. Although he survived attacked, he was horribly wounded and left
with a giant wound on his side. The wound was left untreated. Instead of
getting Paolo proper medical care, the farmer duct taped the wound shut.
Thankfully, a nearby neighbor knew that Paolo needed and deserved better care
and called animal control. Due to the farmer’s failure to provide proper
medical care, animal control officers seized young Paolo and brought him to the
sanctuary where Paolo immediately received proper care. Paolo survived the
ordeal without any lasting effects; however, Paolo does now carry the scar of
that horrible attack. We hope it reminds him of how he gained his freedom and
not the attack itself.

Paolo bears the scar of the the injury that was his salvation.

Paolo’s healthy wariness of humans quickly dissipated at the sanctuary, where he was
nurtured and doted upon. As Paolo became confident that he was safe and in good
hands, he came out of his shell and returned the affection.

As a young calf at the sanctuary, Paolo his now best pal Bruno, whom also had been
recently rescued. Bruno bullied the smaller steer at first with the bad
influence of some older steers. After the older, more rambunctious steers were
transferred to another sanctuary location, Bruno calmed down and befriended
sweet, young Paolo. The two have been bonded ever since. They spend their days
lounging near one another and often can be found grooming one another.

Bruno is not Paolo’s only friend in the herd. Upon arrival, all of the young steers
integrated into the herd are initially befriended by Paolo. Paolo grooms and
mentors the youngsters. The newly initiated find comfort in Paolo’s friendship
and often tag alongside him as anxious, fun-loving younger brothers. Each of
these youngsters has outgrown Paolo, whose stature is more short and stubby,
and then challenged him. Paolo seems to accept this rite of passage graciously,
settling back into his role at the lower rung of the herd awaiting his next
mentee.

With this same grace, Paolo meets and greets all of the visitors to the Southern California shelter. Unlike Bruno, who always accompanies Paolo in meeting visitors, Paolo does not wow visitors by licking
them and putting on a show. His approach is much more subtle and simple. But that does not mean he doesn’t have super fans…

In repose, Paolo accepts all of the love and affection given him. And we welcome you to share his story. Together, we can encourage awareness and understanding about the deep emotional lives of cattle as well as the unfortunate truth about the beef and dairy industries. With a growing number of delicious dairy- and meat-free options and recipes, it’s never been a better time to make the switch. And it is one of the easiest ways to honor Paolo.

With your support we can continue to promote compassionate vegan living through rescue, education, and advocacy efforts. A compassionate world begins with you!