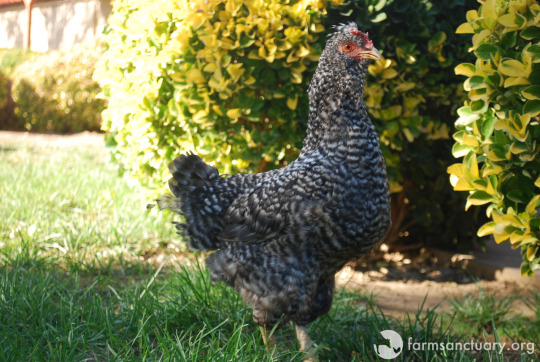 Sarah Tobias hen came to our Southern California Shelter late this past summer from the backyard flock of a well-intentioned but unprepared private farm-animal rescuer. She was rescued along with several other
birds from the same flock, and each of these birds was in desperate need of appropriate care and individualized attention. Sarah Tobias upon her arrival at Farm Sanctuary.

Of the chickens, Sarah Tobias and her flockmate Natu were in the worst shape. Both birds required immediate veterinary care, and sadly, only one member of the duo was able to recover. Unfortunately, Natu’s injuries proved to be too extensive and irreparable, and a few weeks after we took custody of him, he was euthanized to relieve him of his suffering.

Natu was unable to walk due to a spinal injury, and he was much too thin when he arrived at Farm Sanctuary. We suspect that he had been suffering for weeks with the spinal injury, and had been unable to get himself to any food source. Based on the poor shape he was in when he arrived, we believe that Natu’s former guardian had likely not noticed the rooster’s injury, or the fact that he was starving. Since he was a Silkie, a smaller-breed rooster, we suspect that Natu sustained the spinal injury by being stepped on by a goat or sheep living in the small aviary with the birds; rolled onto by one of the obese potbellied pigs also living at the property; or hurt in a fight with another of the many roosters living there.

Natu at the vet’s office.

Once Natu was in our custody, we separated him from the other chickens and placed food and water bowls directly in front of him; he ate voraciously. One thing was clear: He had not eaten a proper meal in peace in a long time. We were more than happy to provide him with one, and many more thereafter in the weeks he spent with us. At the end of his life, Natu was finally able to live without fear, and with food consistently available to him. That was the least we could do for the tiny, fluffy rooster for the remainder of his days.
Steroids initially helped, but quickly failed. Natu would never walk, and his discomfort was patent, in spite of the pain medications he was receiving. Two weeks after he was rescued, we made the difficult decision to euthanize this brave little bird. Although we all wished there were other options and mourned his loss, we
rejoiced in the knowledge that he was able to live his last days in comfort, with a full belly, and die peacefully not of starvation and in excruciating pain in a flock where he was not noticed at all, let alone seen as an individual someone worthy of care and attention.

In the brief time that Natu was with us, he not only experienced safety and security, he also experienced love. He and Sarah Tobias nursed their wounds together. He loved her fiercely. Whenever we needed to treat her, Natu would protect her from us. He was a fiercely loyal warrior who deserved a longer and better life than he had, but we take comfort in knowing that he at least died with a name and loved by us
and Sarah Tobias.

Sarah Tobias enjoying a stroll in the grass.

Although Sarah Tobias’ injuries were also grave, they were not beyond medical intervention.

The cause of her injuries was unmistakable: She and the other female birds rescued from this flock suffered from extreme over-mating. The ratio of roosters to hens in the flock was dramatically out of balance. A
healthy rooster-to-hen ratio is 10 to 12 hens per rooster; at minimum, there should be no fewer than eight hens per rooster. When there are too few hens, the roosters will over-mate the hens due to their strong natural drive to propagate. Over-mating can lead to injury or even death to the hens, either from the rooster’s spurs or beak. Over-mating is common in flocks were there are too few hens per rooster, and is exacerbated when the chickens are confined to a small space. A loss of feathers on the back and wings is a clear sign that a hen is being over-mated.

Sarah Tobias’ back, wings, and neck as seen on the day of her arrival at Farm Sanctuary.

In Sarah Tobias’ case, the lack of feathers on her back and wings was a dead giveaway that she had been over-mated. All of the other hens rescued from the same flock also suffered from extreme feather loss on their backs and wings, indicating that Sarah Tobias was not being singled out, but rather, that the
flock itself had a disproportionate number of roosters. Upon further examination of Sarah Tobias
during her incoming health check, we discovered that she also had a large, old wound underneath her left wing on the top of her left thigh.

We discovered a wound under Sarah Tobias’ wing.

The wound was covered by a thick scab, which was masking a deep, infected pocket filled with pus and rotten dead tissue. We cleaned the wound, removed some of the dead tissue, and started her on a medical regime of antibiotics and pain medication while closely monitoring her.

While the wound was being treated, Sarah Tobias prolapsed an unfortunately common condition for hens who’ve been bred to lay far too many eggs. After gently pushing the protrusion back in, we rushed her to the vet. There, she received a hormone implant to temporarily prevent her from laying eggs and underwent a surgery in which her vent was sutured to tighten her muscles and her leg wound was completely debrided. The wound was sutured and a drain was inserted to allow the remaining pus to drain out of the wound. For two weeks, shelter staff monitored the surgical site and flushed the drain while Sarah Tobias continued on her regimen of pain medication and antibiotics. Finally, after six weeks of being quarantined in the office for treatment, the last of her sutures were removed and she was able to be introduced to the main Southern
California Shelter flock. There, she was reunited with some old friends and made some new ones as well.

Sarah Tobias with her flockmates.

The humanimals of the Southern California Shelter staff are not yet among Sarah Tobias’ new friends; she fears humans greatly. When she was at the vet’s office, they nicknamed her “Killer” because she would ferociously attack anyone taking her out of her cage. We do not blame Sarah Tobias; we know that she
suffered greatly while her human guardian ignored her needs and cries for help from the constant rooster attacks. Like her namesake, Jodie Foster’s character in the movie The Accused, Sarah Tobias is a
survivor, and we love and admire her for it. We hope she will one day learn to trust us, but our love for her is not dependent upon that happening.

Sarah Tobias and Natu did not need to suffer. But they came from a flock afflicted with a common ailment: ignorance. Ignorance should not be mistaken for intent; most people who rescue animals do so because they care about the animals and want to provide them with a better life. But good intentions do not necessarily translate into proper care for the animals. Well-intentioned people who rescue chickens are often woefully undereducated about their needs.

Rescuing chickens is easy; caring for them properly is hard work. The hardest part of saving animals
is the daily work of providing appropriate individualized care, which means learning about the specific needs of the species of rescued animal — from diet to veterinary care to appropriate living quarters and companions. Not every vet is experienced in treating every species of animal, and appropriate care requires having an available vet who is knowledgeable about the care of the specific species.

Chickens are no different than any other animal. They need proper, individualized care and
attention. Rescuing them to then let them suffer does nothing; they deserve to be treated as unique individuals with their own special and individual needs.

Want to help chickens like Sarah Tobias? One way to make a difference is by sharing her story to raise awareness about the level of care that chickens require. Another way (for those with the time, resources, chicken-friendly zoning, and knowledge of or desire to learn about proper chicken care) is to consider adding rescued chickens to your family. If you’re interested in adopting, we hope you’ll check out our Farm Animal Adoption Network (FAAN), whose members have helped us get thousands of farm animals out of bad situations and into loving permanent homes over the past three decades.