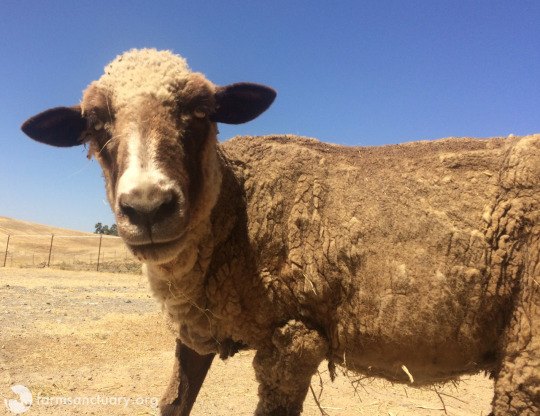 Like the dynamic duo of television fame, Shirley sheep and her pal Laverne were set
on doing it their way and at Farm Sanctuary’s Northern
California Shelter, Shirley’s dreams have certainly come true.

You could say that Laverne and Shirley sheep had a made-for-TV story of their own. While
most sheep in the United States are exploited for their meat or wool, Laverne
and Shirley had a happier backstory. They lived with a small group of sheep
under the care of a retired nun, who valued these companions as friends, not
food. The plot twist? One day the Sister was called out of her retirement for
an upcoming mission in San Francisco, and had no choice but to find new homes
for her beloved friends. Laverne and Shirley were the last to find homes; at
ages 12 and 15, respectively, it was hard to find someone experienced in
geriatric sheep care, who could give these girls the individualized attention
they needed to thrive. Fortunately, one of the Sister’s friends reached out to
us, and we gladly welcomed these girls to their new home in Orland. 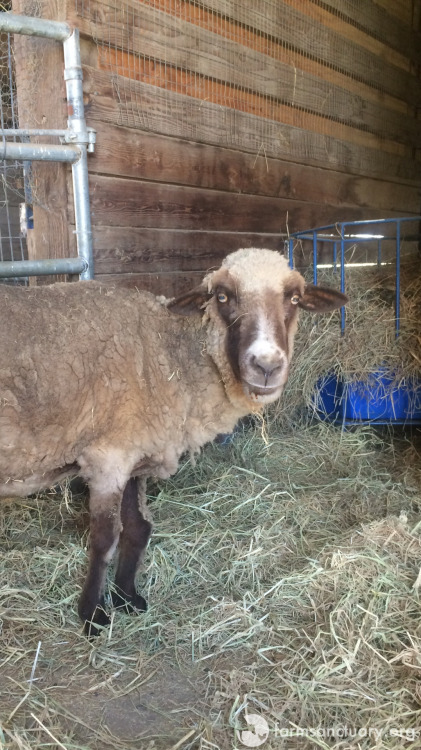 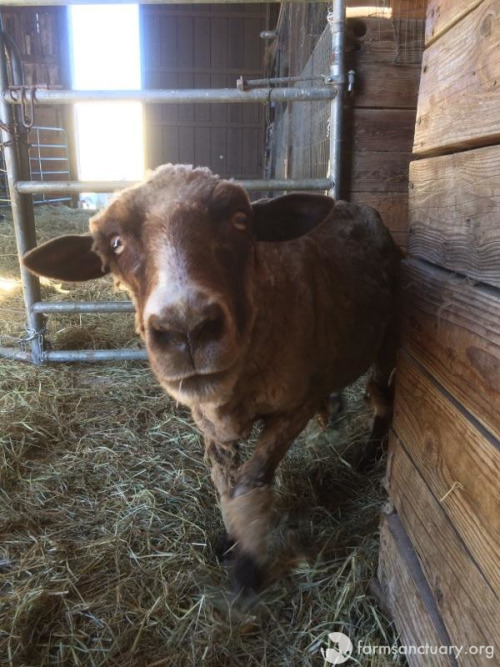 The girls’ first meal! We were so excited  to see Laverne and Shirley enjoy the quality care they deserved, and to help them embark on this new journey, together.

Despite growing up in a loving home, it was clear that Shirley required a large amount
of care. She was emaciated, had overgrown hooves, and upper respiratory issues. She also had painful arthritis that taxed her every move. This goes to show that even people with the best intentions may not have the resources available to properly care for farm animals. Therefore, it’s important to learn how to properly care for farm animals before taking on such an important role. We immediately set to work on this old girl we trimmed her hooves, started her on pain medication for arthritis, and also started her on antibiotics for her upper respiratory infection.

Even in situations where animals are receiving basic care, it may not be enough to suit their needs. Shirley was suffering greatly in the Sister’s absence, her elderly, emaciated body wearing down. We immediately set out to restore her to health, so she could live our her later years with dignity!

While doing her incoming exam, we also found that Shirley had very few teeth left. She had enough to continue eating hay, but not enough to properly break it down for her to get the nutrients she needed from it. To make sure she had the nutrition she needed we started her on a mash mix of forage pellets and grain soaked in enough water to make it soft and easy for her to eat. When we first offered Shirley this mash, she seemed unsure of what to make of it. She waited until Laverne took her first few bites before beginning to nibble on her own bowl of mash.

When we trimmed Shirley’s hooves, we found pockets of hoof rot that had to be cleaned out and treated. But with all of the treatments she received, in addition to her new nutritious diet, Shirley slowly started to recover and thrive in her new life at sanctuary. Fortunately, she didn’t need much convincing after this first taste, and was soon running to the gate every time we brought a bowl of her favorite mash. We also started offering Shirley and Laverne a soft hay mixture to make eating it a little easier on their tired jaws.

Shirley’s hoof rot. Her days working hard on her feet in a supporting role were now behind her, and at Farm Sanctuary she was now the star of her own life!

While Shirley’s body was on the mend, she had a long way to go emotionally. She clung to her friend Laverne for comfort anytime one of her humanimal caregivers would come by or approach her with medications or food. We realized it would take baby steps to make Shirley feel at home, so we did everything we could to help her feel as comfortable as possible. Once Shirley and Laverne completed their incoming quarantine, we moved them in with another older sheep, Amy Lynn. These three clicked immediately, and started a new herd that we lovingly referred to as “The Golden Girls.” Once a television star, always a television star!

Their new home was not only much bigger, but also flat and easy to maneuver an important asset for the elderly ladies. Ever since Shirley moved into her new home, she has enjoyed spending the majority of her time outside. She is often the first one to run out the door when opened to pasture in the morning, and the last one to come in when it’s time for bed at night. In fact, when Shirley and Laverne first moved in, it took up to three staff members to get them into the barn at night. Shirley had her freedom, and she wasn’t going to go back inside at night without a fight!

Laverne and Shirley enjoyed eight glorious months together in their new home, spending their days side by side, the way old friends do. Sadly, Laverne’s arthritis took its toll, and when we could no longer keep her comfortable we made the difficult decision to say goodbye. Though her time with us was short, we take comfort in the face that Laverne had a good life. While she was here, she was happy — she had all the special mash she could ask for, formed deep friendships with the other geriatric sheep, could come and go as she pleased, and had a warm barn to sleep in during the winter. And of course, she had Shirley — her ever-faithful friend who stayed by her side until the very end.

Laverne in her final days.

After losing Laverne, Shirley relied on the other Golden Girls for comfort. She became closer with new arrival Helen, who helped her come out of her shell with her humanimal caregivers. She began to look forward to our daily visits. To this day, she is still the first one to run up to the gate, albeit slowly, to receive her medicine syringes. Caregivers have had to learn to hold on tightly to these syringes because she will try to pull one out of their hands and run away with it!

Shirley’s a champ at taking her daily meds alongside fellow Golden Girl Helen. We love watching her perk up for some much-deserved TLC!

Recently, Shirley decided that she enjoys a good head massage or scratch! This
is touching for us all to behold — Shirley was extremely timid when
she first arrived, so it is amazing to see how she has grown to trust and value
her humanimal friends. And it’s all because she knows we value her just as
much, and allow her to be the individual that we know her to be.

At Farm Sanctuary, Shirley has it all good food, good friends, and good care. She is adored by her “sheeple” and humanimals alike. Although she is a very old sheep, and will continue to need daily and sometimes intensive care, she is living the good life at Farm Sanctuary. And that’s all we can ask for this amazing Golden Girl, who will spend the rest of her life “doing it her way.”

Please share Shirley’s story. Together, we can encourage awareness and understanding about the rich emotional lives of sheep like her. With your support, we can continue to promote compassionate vegan living through rescue, education, and advocacy efforts. A compassionate world begins with you!