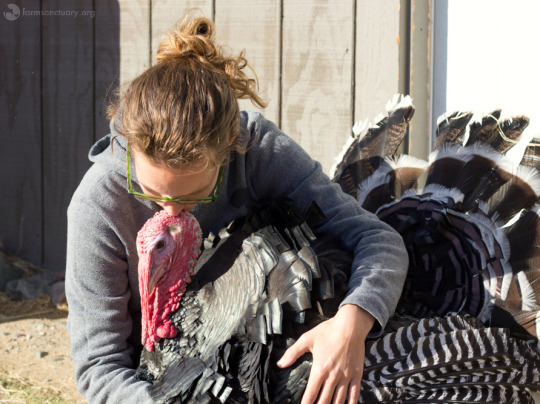 Today, our outgoing turkey friend Tibbott is happily strutting his way through Farm Sanctuary life. But things could easily have turned out very differently for this very special bird. 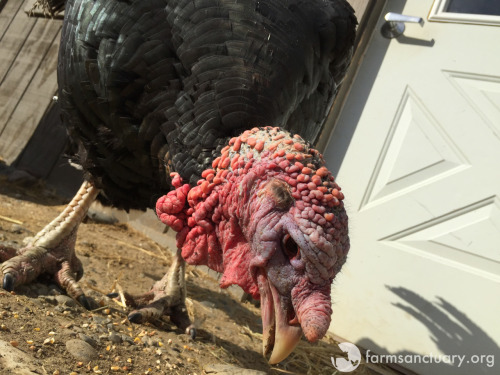 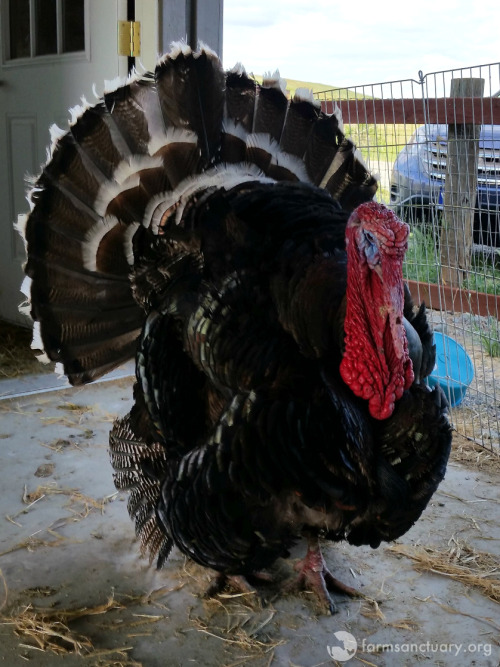 It was Tibbott’s spectacular personality that spared him a horrible fate when he was just a baby. He was one of a group of poults (baby turkeys) who were being sold at a feed store when a man came in looking to buy baby birds to feed to his snakes. He purchased all the poults in the store – all, that is, except one. The cashier had grown attached to little Tibbott and couldn’t bear to sell him for snake food, citing his amazing personality and will.

Instead of being sold as snake food, Tibbott was eventually purchased by people who kept a backyard chicken flock. But unfortunately, the young turkey’s larger-than-life personality didn’t endear him to the larger chickens in his new flock, who didn’t want to share their food or space with this new resident. It took weeks before Tibbott was big enough to establish himself in the flock.

By this time, Tibbott’s human guardians had discovered that they were not prepared to properly care for a turkey. They knew they could not keep Tibbott, but they were worried about rehoming him, afraid that he might end up being killed for food rather than kept as a companion. Fortunately, they reached out to Farm Sanctuary, and a short time later, Tibbott was being welcomed to his new home at our Northern California Shelter in Orland.

It took almost no time at all for Tibbott to charm his way into the hearts of his new humanimal friends. He would wait by the entrance of his enclosure for someone to come by, and when they did, he’d immediately puff up his feathers and begin strutting. He’d strut for anyone who walked by, showing off just how perfect he was (and indeed, still is).

When this special turkey arrived at Farm Sanctuary, we knew he needed an equally special name. We immediately thought of Seth Tibbott, Hero of Compassion and founder of Turtle Island Foods, a company whose innovative products (including the famous Tofurky Roast) have helped save many turkeys just like Tibbott. We were especially honored to introduce Seth to his namesake at our 2013 Celebration for the Turkeys.

Seth Tibbott holding his award bearing the image of his namesake.

To this day, Tibbott will fluff out his feathers and strut around for his human friends. He even has a new “dance partner” in best friend and roommate Raphael turkey, who has also mastered the art of the strut. (The two share an enclosure with Jethro, a Cornish cross rooster.) Tibbott and Raphael are two peas in a pod and perfect partners in crime! At mealtimes, they love to tag-team the person on feeding duty, often trying to grab the food bowls from his or her hands before they even hit the ground.

Raphael and Tibbott, the best of friends.

Tibbott has continued to thrive during his time at Farm Sanctuary, and loves the companionship he has found with his animal and humanimal friends alike. His goofy and loving personality is uniquely his own, and makes us love him more and more each day.

Please share Tibbott’s story. Together, we can help spread awareness that turkeys like him are each someone, not something, individuals worthy of our care and respect. With your support, we can continue to promote compassionate vegan living through rescue, education, and advocacy efforts. A compassionate world begins with you!