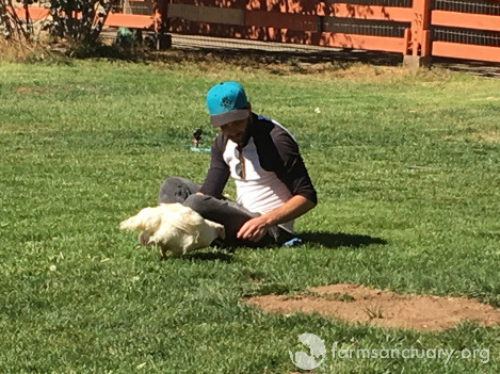 New resident Yolanda hen only arrived at our Southern California Shelter a few months ago, in early October, but she has quickly found her own special place in our hearts.

a longtime supporter and friend of Farm Sanctuary,

volunteers at the shelter where she was being housed and contacted us about her. We were happy to help this young hen and give her the happy life she deserved. Now safe and sound at her new home, she is one of the very few birds of her kind who will know the joy of sanctuary living and have the opportunity to reach maturity.

Yolanda is a Cornish-breed chicken — a type raised for meat; members of this breed are called “broilers” in the agricultural industry. Approximately nine billion Cornish chickens are slaughtered in the U.S. annually for meat.

These birds are killed at the young age of 42 days old; at the time of slaughter, they are “peeping” the sound of baby chicks. Over the past 50 years, these chickens have been selectively bred to grow 300% more each day. By the time they’re a month and a half old, they usually already weigh an astonishing four to five pounds. Given this breed’s propensity for gaining weight, when they are allowed to grow to maturity (such as in a sanctuary setting), they suffer grave consequences due to their size, including heart disease and problems with their leg joints and feet. As with humans, the best treatment is prevention; to prevent and forestall some of these issues, all of our Cornish residents are placed on a strict diet. (Learn more about large-breed chicken care at Farm Sanctuary here.) Absent a controlled diet, these birds do not reach their first birthdays, even in a sanctuary setting.

When Yolanda arrived at Farm Sanctuary, she weighed approximately four pounds. We guesstimate that she was around two months old at the time. Although we will never know her exact origins, we suspect that she somehow narrowly escaped slaughter, whether at a local live market or in someone’s backyard.

It was clear from Yolanda’s condition that she had not always been treated with the kindness that she now knows at sanctuary.

Yolanda bore the telltale signs of having been mishandled. On the underside of one of her wings, we discovered significant swelling and bruising. Common industry practice is for workers to pick up and otherwise harshly handle these birds by their wings, resulting in frequent injuries to their wings.

Large-breed birds used in meat production are often picked up by the wings, which can lead to problems including wing dislocation and compound fractures. (Photo by Jo-Anne McArthur / weanimals.org.)

Thankfully for Yolanda, her injury, though painful, was superficial and healed well within a few weeks, without any lasting damage.

Yolanda’s swelling and bruising suggested that she had been handled roughly, which is sadly common in the meat industry.

Once Yolanda was introduced to our flock of Cornish hens (after first being quarantined for 30 days), we quickly understood how she escaped death. Yolanda is fast, fast, fast — that is, as fast as her small, round body will allow her to be. Her speediness became immediately apparent because she was terrified of the other birds. When any of them came near her, she ran away from them, squawking loudly. We were surprised by Yolanda’s reaction, because she was not afraid of us. Rather, she loves her “humanimal” caretakers and seeks out our affection. In fact, when fleeing from her cohorts, she would run directly to the nearest human she could find for safety. During Yolanda’s first week or so with the flock, she was as likely to be found sitting on someone’s lap, under their legs, or simply nearby them as she was to be exploring her new living space.

Because she was so terrified of her new “roommates,” they chased her, exacerbating her fears. Poor Yolanda’s integration into her new living space was going much worse than we’d hoped. We separated her from the other birds at night and during feeding times to ensure that she was not picked on, and we contemplated other living arrangements for her.

Yolanda in her new aviary home.

It was difficult for us to watch our young chicken buddy struggling to make friends with the other birds; her isolation and continued nervousness tugged at our heartstrings. But despite our sadness for her, our years of experience caring for chickens provided us some solace. We expected that Yolanda would become less skittish with a little time, and then would gain acceptance within the flock. Fortunately, this assessment proved to be correct. With time, Yolanda has learned that her new chicken companions, like us, mean her no harm.

Yolanda with her new flockmates.

Yolanda now sleeps among her peers and is rarely picked on. Now, safe among her own kind and free from harm, we can all rest a little easier knowing that she will thrive in her new environment.

Yolanda comes up for a visit with volunteer Bozant Katzakian.

Although Yolanda is settled into her flock now, she has not forgotten her love for people. She’s the first chicken to greet anyone entering her space and is delighted when a human friend sits down.

Yolanda visits with Kat in this clip from The Hollywood Reporter’s recent live video interview at our Southern California Shelter.

A warm and cozy lap to snuggle into and gentle pets are all Yolanda needs, and we are more than happy to accommodate this gentle soul.