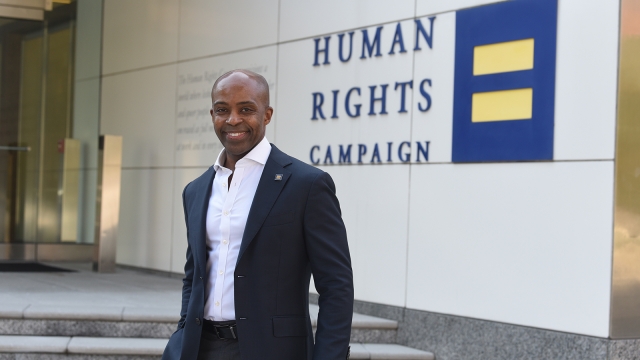 HRC celebrated the first 100 days of Alphonso David’s trailblazing and transformative tenure as the president of the Human Rights Campaign.

“Over the past 100 days, I have met with national leaders, supporters, advocates and volunteers — many of whom are living on the frontlines of our community’s struggle for equality,” said HRC President Alphonso David. “They have shared with me how meaningful and impactful the work of the Human Rights Campaign has been, and they have also challenged us to do better, to learn faster and to lean in on the issues that matter most to those who need us the most.

“One hundred days in, I am proud of what we have already accomplished together,” David continued. “We have launched new initiatives that will empower and support our community’s most marginalized members, protect foundational rights and institutions of our democracy, deepen our commitment to ensuring racial justice in all that we do, and expand our national footprint. And this is only the beginning. For 40 years, the Human Rights Campaign has been working to build a society in which every person can thrive — no matter who they are or whom they love. Now, as we turn toward 2020 and the most important election of our lifetimes, I am more committed and hopeful than ever because of the stronger organization, movement and nation that we are building together.”

In his first official act as president of the Human Rights Campaign, Alphonso David embarked on a national tour of seven key cities to meet with and rally HRC members, advocates, voters and pro-equality candidates ahead of the 2019 and 2020 elections.

This tour, as well as ongoing conversations with community leaders, members and partners, led the launch of several events and initiatives to advance equity and equality within and outside the LGBTQ movement, including:

During the first 100 days of his tenure as the president of the Human Rights Campaign, Alphonso David has also:

In the next few months, David will be working with HRC staff, members, supporters and volunteers to develop these new initiatives and others; to strengthen the organization’s existing work; and to kick our electoral efforts into high gear in advance of the most important election of our lifetimes.

In 2018, HRC mobilized 57 million Equality Voters in targeted states and districts nationwide to help elect pro-equality leaders at every level of the ballot. In 2017, HRC identified six priority states for their importance in both 2018 and 2020: Arizona, Michigan, Nevada, Ohio, Pennsylvania and Wisconsin.  In those states, pro-equality candidates won 5/5 Senate seats, 4/6 Governor’s mansions and broke anti-equality trifectas or supermajorities in 4/6 states. Now, in addition to electing pro-equality candidates nationwide, HRC will build upon the tremendous successes in these states and across the country to defeat Donald Trump and Mike Pence while electing a pro-equality president in 2020.