To say that calves are born innocent and completely reliant on the humans who control them — rather than their own bovine families — is, sadly, to state a fact. Unlike animals in the wild, cows in the dairy industry have zero ability to control the outcome of the babies they give birth to each year. 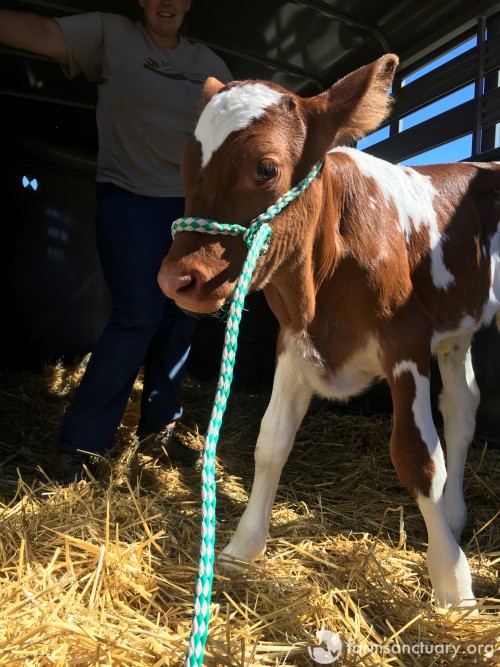 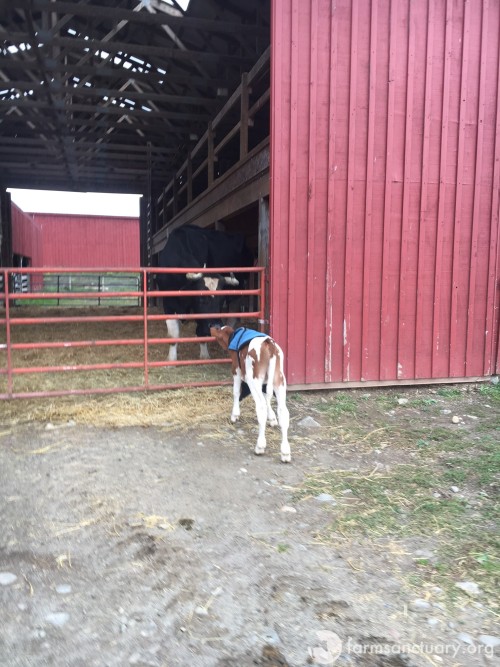 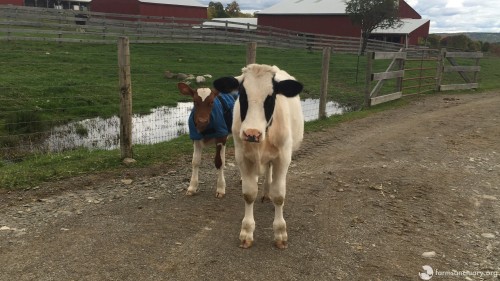 There is a lot of love and happiness in this baby!

No ears- one ear. What a fun game 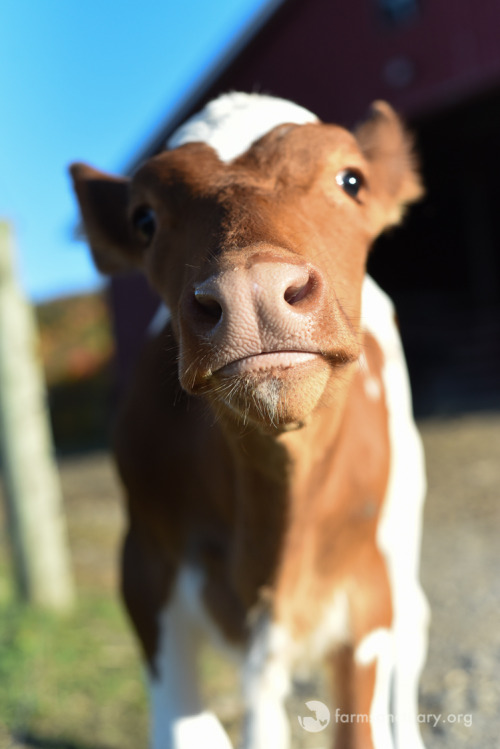 Just days old, this boy is all legs, no coordination, and completely reliant on others to provide for his daily needs — just like a human baby.

Gary, a new Farm Sanctuary resident, is an Ayrshire calf. Ayrshire cows are used to produce milk — they are dairy cows. So boys born to dairies are exactly what you would think: pretty much worthless to that industry. Boys, of course, cannot produce milk, because they cannot give birth.

And so when Gary was born, he was worth very little to the person who “owned,” and therefore had complete control over, his mother.

Gary is born, at 113 pounds, but considered worthless to the owner of his mother, a dairy cow.

So do dairy cows not care about their babies? Do they not realize when they are pregnant? Do they want to be maternal and raise their own babies? Of course they love their children — and of course they want to care for them — just like all mothers. But unlike most mothers, they are owned; they are considered property.

Recently rescued Liz and son Cashew have a very different life than the typical dairy cow and her male offspring. And Liz is a prime example of the love felt by a mother cow, which is very real.

And while it might seem to be a no-brainer that taking a baby away from any mother would cause them distress,

on dairies across the country.

Alone for the first weeks of his life, Gary missed out on the love that he would have received if he would have been allowed to stay with his mother.

At our sanctuaries, we take in motherless babies, downed calves at stockyards who are just hours old and without their mothers, deemed worthless by an industry whose sole purpose is to produce milk for human consumption.

And what happens to these motherless boys in the industry? Male dairy-breed calves are the lost boys of a system dedicated solely to a product

— and not to the animals who produce that product. And like all mammals

(including us), that product was made for the mother’s baby, not for the benefit of another species. And, to be clear, it is not necessary for humans to consume cows’ milk to live. So why?

In the words of Upton Sinclair: “It is difficult to get a man to understand something when his salary depends on his not understanding it.” A dairy farmer, the dairy industry in general, does not want to understand. Their disconnect from one of the simplest concepts

— the love between a mother and her baby — is lost or ignored, because to understand would mean to not produce and sell milk.

Adjusting to life with his human caregivers, Gary is treated for various health issues

— most of them unlikely to have occurred had he been allowed to be raised by his mother. Calves raised by mom have few health issues, but those raised by humans have many.

(in a sanctuary setting), I can tell you that these animals would give up everything to be with their children, and to pretend that they do not care is, at minimum, ignorant. To assume that we as humans are the only ones who can truly love our children is also arrogant.

A tiny boy suckling on my pants

comfort that he should have had from his own mother.

So, like the majority of the male calves who end up at our sanctuaries, Gary’s lack of worth at a dairy left his mother without a son and this tiny, beautiful, and innocent boy without a mother. At just hours old, he not only was taken away from his mother, but not even allowed to nurse, and instead tube-fed colostrum. Maybe for the best

he never knew her

but for his mother, the loss of her baby is a pain that is ignored by a world that sees her only as a producer of a product.

Although Carlton is a far cry from mom, he is at least the same species. Thankfully we have a big brother for this tiny newcomer.

Gary was left without the security that a 1,200-or-more-pound bovine with unconditional love would make him feel. He was unable to feel the warmth of his mother’s touch, to sleep against her at night, and to do the one thing that should have been a birthright

to be able to nurse and take in the nutrients that were intended and created for him and him alone.

— although laying on a rubber boot is a far cry from laying his head against his mother’s chest.

So although Gary will be forever cherished and adored by every human he comes in contact with from now on, we cannot replace the immunity his mother would have provided, the protection, but most importantly, that complete love that mothers have for their babies

— and for that, our hearts break.

Although he will never be with his biological family, Gary will grow up with and create a family at our sanctuary.

We will be forever thankful to have this incredible being with us, and we cannot wait to see who he becomes as an adult steer. But we will forever wish that we could have his mother, too

to be able to allow them to live the life that should have been a birthright.

a lost boy himself more than a decade earlier. Moo has found family at sanctuary and is more than ready to bring Gary into that family.

For now, we will just give Gary all the love we can and surround him with a new family

many of them other lost boys of the dairy industry

and the respect and care that all beings deserve.

Gary running to me.

Please share Gary’s story. Together, we can raise awareness about the cruelties inherent in the dairy industry and increase understanding that every calf like him is someone, not something. With your support, we can continue to promote compassionate vegan living through rescue, education, and advocacy efforts. A compassionate world begins with you!