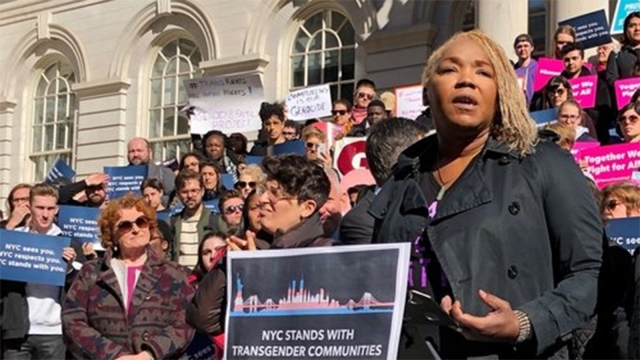 For Kiara St. James, “the first act of resilience is to take a breath and acknowledge that we have a right to exist.”

She is the co-founder and executive director of the New York Transgender Advocacy Group, an organization that advocates for more inclusive gender-based policies. A community organizer for more than 20 years, St. James has been instrumental in changing discriminatory shelter policies and in the passage of Gender Expression Non-Discrimination Act in New York.

After beginning her advocacy in the South, St. James came to New York City. But the city at the time was “not progressive,” she said, and the start of her time there was very hard. When she began transitioning, she lost her job, and as a trans woman, there were no real opportunities to find another.

St. James ultimately ended up living in shelters in New York. One day she seized an opportunity to join a bus to Washington, D.C. for an HIV-funding rally.

St. James became an outreach worker and advocate, involved in housing policy, but she grew increasingly frustrated by work being done. “I’d be in these groups that would be geared toward Black trans women [but] led by others.” So St. James said, “enough is enough” and joined together with advocates to start NYTAG working in policy that is tailored to the communities it is supposed to serve.

“The beauty of policy is that it improves everyone’s quality of life,” St. James said. “When it’s done right, it means that everyone has a seat at the table. And it’s also about equity — meaning that those who need the most get the most.”

“At any given meeting on the issues for the past 20 years, the data doesn’t really change,” she said. “It always shows Black and Brown bodies at the top of any disparity — suicide, homelessness, depression.”

She also recognizes that this work must address the urgent needs of the moment.

“Policy takes a long time but people have immediate needs,” St. James said. “We need policy to address equity and inequity as it now stands.”

St. James also wants to make sure we are not erasing the communities in most need of being uplifted.

“I’ve been in progressive spaces where people say ‘we’re all the same.’ We all have beautiful colors and identities. Why erase that? We need to recognize the nuances of our diverse community.”

St. James’ advice to young people looking to get involved is that “you are the subject matter expert in your own life. That’s the reason you have a right to be at the table.”

“When I first got into advocacy, I started showing up, and little by little I learned the layout of the land,” she continued. “But it all starts when you show up.”

Ultimately, for St. James, it is imperative that we all call out injustice. “Zora Neale Hurston wrote, ‘If you are silent about your pain, they will kill you and say you enjoyed it.’ That’s why we all have a responsibility to speak up.”