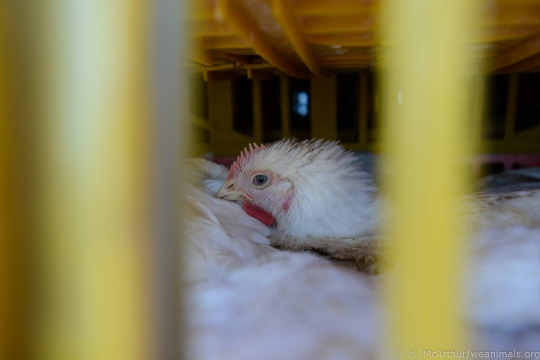 The homeowner thought it was thunder. Instead, his house had sustained the impact of dozens on crates containing thousands of chickens who had been on their way to slaughter.

A transport truck driver was headed to New York when he hit a curve too fast and crates (each packed with up to 20 birds) flew 100 feet through the air, slamming into the house.

Crews worked to clean up the mess, and we were called to the scene along with colleague Mike Stura, founder and president of Skylands Animal Sanctuary And Rescue. Unfortunately, no survivors remained on the property when we arrived. We found only body parts.

Trucks stacked more than 12 crates high, each crate containing 10 to 15 chickens each, drive down major highways taking these frightened birds to slaughter facilities around the world. Above photo by Jo-Anne McArthur of Toronto Chicken Save Vigil — bearing witness as a truckload of Cornish chickens arrives for slaughter.

In each case, these birds had been jam-packed – typically without food or water — into several tiers of plastic crates with feces and debris raining down on those positioned below. These crates are stacked in the open-air, with no walls to protect the chickens from the wind or elements. In the rush to get this “cargo” to its destination, drivers don’t always check to ensure straps are properly locked down, and so the crates fall off the trucks, generally without the driver even noticing. In this case, the driver did stop and he is expected to be cited.

Up to 20 chickens are packed into each crate as illustrated in this photo by Jo-Anne McArthur/WeAnimals of a worker in Spain loading crates for transport to slaughter.

Each time transport accident headlines flash across the screen, we are reminded of the callousness in which animals raised for production. Companies ship boxes of cereal with greater care. But the way in which these birds are transported is reflective of the way in which they enter this world and the course of production. “Broiler” chickens, bred for meat, are typically raised in intensive confinement. Crowded together by the thousands in bleak warehouses, they never have a moment’s respite from the crush of other bodies around them. They never step foot outside or breathe fresh air. Their lives are not their own.

We are sorry we could not save them this time as we remarkably managed to do so in other cases. Please share this story and help promote awareness of the bitter reality of the harrowing journey from “farm” to table.