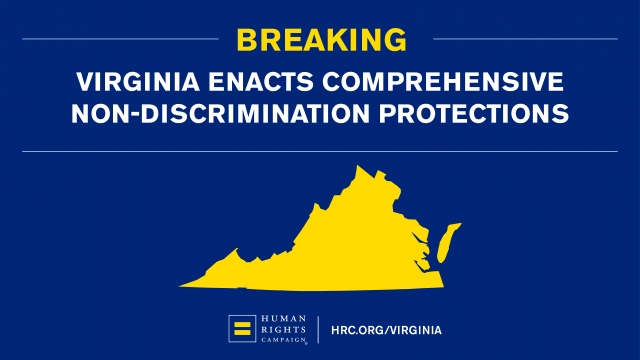 Virginia adds all-new protections from discrimination in employment and places of public accommodation for a wide range of characteristics including race, religion and sex

HRC celebrated the signing into law of the Virginia Values Act by Governor Ralph Northam. The law will extend existing state non-discrimination protections in public employment, housing and credit to Virginians on the basis of sexual orientation, gender identity and several other characteristics. Similar legislation passed through the Virginia Senate several times in recent years but was blocked by anti-equality lawmakers in the House of Delegates. In the 2019 election, voters in the commonwealth elected pro-equality majorities to both houses of the General Assembly, making this victory possible.

In addition to sexual orientation and gender identity, the law also creates all-new protections for Virginians in private employment and places of public accommodation on the basis of race, color, religion, national origin, sex, pregnancy, childbirth or related medical conditions, age, marital status, disability, and status as a veteran. Virginia is the first state in the South to have non-discrimination protections for LGBTQ people, the first state in over a decade to add both sexual orientation and gender identity to existing non-discrimination law, and the first state since 1993 to add a prohibition on discrimination in public accommodations (protecting all Virginians) where none existed before.

“When this law goes into effect on July 1, LGBTQ people in Virginia — and people of color, people of faith, immigrants, women and more — are at last protected from discrimination at work and in their communities,” said Alphonso David, president of the Human Rights Campaign. “No one should be discriminated against simply because of who they are or whom they love. Right now, as the country and the world deals with an unprecedented pandemic, it is more important than ever to ensure that leaders are looking out for all of us. In this period of uncertainty, it is vital that we are all protected from bias as we earn a living, access housing and healthcare, and seek goods and services. We have arrived at this moment today because of years and years of tireless work from advocates across the commonwealth, and the Virginia voters that filled the halls of the General Assembly with pro-equality champions who fulfilled their promises to their constituents. HRC worked to elect pro-equality lawmakers across Virginia in 2019, and we are proud to see that effort culminate with the signing of this vital law. We want to thank all who helped make this day possible.”

“Equality Virginia has been working with lawmakers on both sides of the aisle for years to create a safer and more welcoming commonwealth for LGBTQ people,” said Vee Lamneck, executive director of Equality Virginia. “This law will have a transformative and positive impact on the lives of LGBTQ Virginians and bring Virginia into alignment with its voters.”

Virginia is home to 257,400 LGBTQ adults. Under prior Virginia law, LGBTQ people were not explicitly protected from discrimination, meaning they were at risk of being fired, evicted or denied service in restaurants or stores. Virginia was one of only five states without protections in public accommodations for any protected class. The new law brings Virginia into the 21st century, and into alignment with Virginia voters, by modernizing and expanding existing human rights law.

Over the past several elections, HRC has successfully elected pro-equality champions at every level of Virginia’s state government. In August 2019, the Human Rights Campaign endorsed 27 candidates and invested over $250,000 to elect pro-equality candidates across Virginia. The endorsements marked the beginning of HRC’s largest ever field, digital and direct mail program in the Commonwealth of Virginia.

From Northern Virginia to Hampton Roads, HRC field organizers were deployed to mobilize 1.2 million Equality Voters across the commonwealth. In 2018, HRC used sophisticated analytics to identify and mobilize 57 million “Equality Voters” nationwide who prioritize LGBTQ-inclusive policies including marriage equality, equitable family law, and laws that would prohibit discrimination on the basis of sexual orientation and gender identity. In Virginia’s 2019 state legislative elections, HRC targeted and turned out these voters in the 27 districts where HRC made an endorsement.

HRC is a proud member of the Virginia Values Coalition. The Virginia Values Coalition was founded on the shared belief that discrimination is wrong and that we are called to treat others as we want to be treated. Members include national and regional organizations, along with faith leaders, parents, law enforcement officers, veterans and people of all political ideologies committed to protecting their LGBTQ neighbors from discrimination.