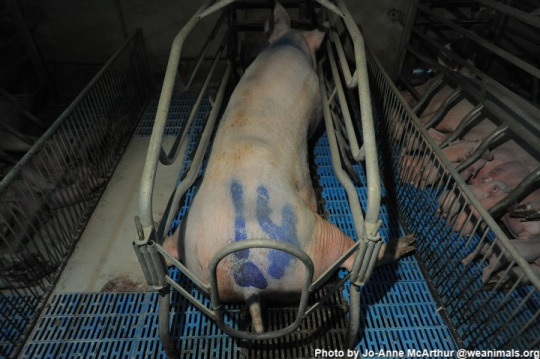 Like so many piglets who arrived at our shelters from large industrial farms, Truffles fell out of a truck.

These trucks are coming from farrowing houses where mother pigs have been nursing their babies while living in farrowing crates which unlike the gestation crates where they are artificially inseminated, allow them to lie on their sides to nurse their newborn piglets. Ruddy and Truffles growing up together 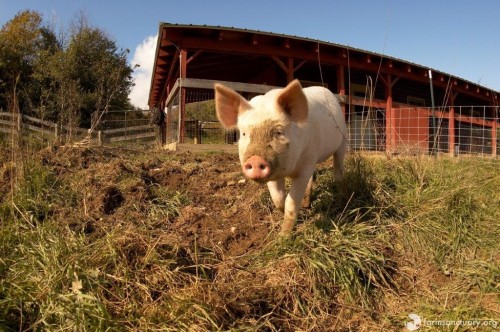 A once tiny Truffles always digging- hence the name. She is the queen of the trufflers! 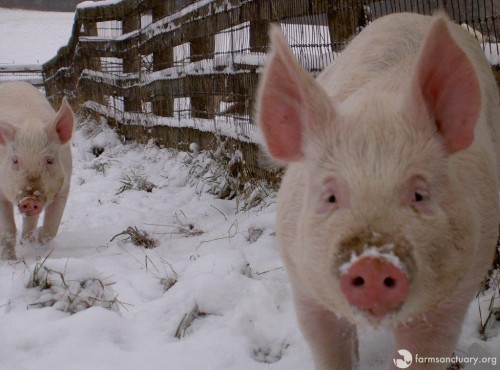 Fun in the snow with buddy Rudy Goofy Truffles living it up in the chamomile with pal Terrin. Photo by Derek Goodwin Clowning around with Gene Baur at Farm Sanctuary 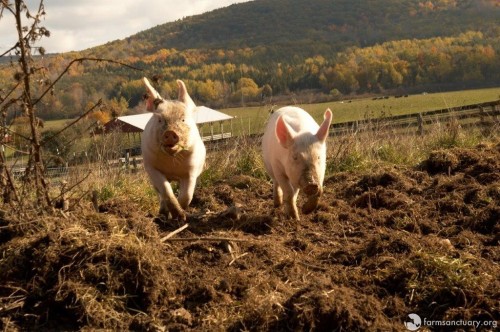 Run for fun- Rudy and Truffles loving life and the mess they made of their pasture. 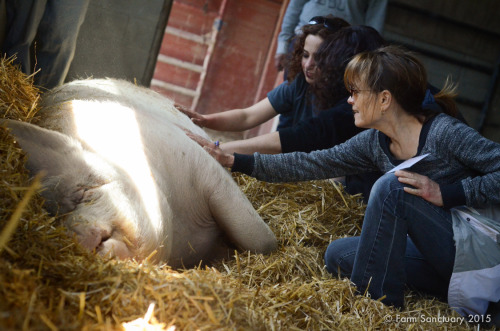 down for the belly rub- Truffles loves her fan club Standing tall- this proud girl just a year away from running the herd.

Farrowing sows never are able to touch their babies although they are very doting and loving mothers.

Depending on the farm, piglets nurse from mom, or another sow, until they are between 10 days to 3 or 4 weeks old (although some farms keep them a bit longer). At the time they are weaned and leaving their mother, they are between 10 and 15 pounds; some are even smaller.

A very stressed-out mother with her tiny offspring outside of her pen.

So on the way to the nursery there seem to be transportation issues and those tiny little piglets (most of whom weigh less than 10 pounds), somehow squeeze through the openings in the trailers moving them and spill out onto the road.

— the finishing barn. Learn more about the harrowing journey aboard transport trucks here.

And like Truffles, many of those pigs have a good Samaritan, who sweeps them up and brings them back to health. In such cases, that accidental fall off the truck is really a lifesaver.

Pigs, even the very young, are quite frightened based on overcrowding and the improper and callous handling they receive because the system is so flawed.

Because after just a weight gain of 25 to 45 pounds, these babies are on the road again

to what is called the Finishing facility or area. This is where they remain until they are a mere 6 months of age and weigh in right around 250 pounds. Needless to say, 2 to 4 pounds at birth to 250 pounds in just 6 months is some serious weight gain. More than 1.3 pounds of weight per day! YIKES.

Feeder pigs crammed together and cut up from fighting.

Meanwhile, Truffles would (thanks to her rescuer) land at the home of a very compassionate lady, who adored her and really wanted the very best for this special gal. And she gave her the best but also was well aware that this little piggy was going to be quite large and quickly.

To meet Truffles when she arrived you would never imagine what her life would become. Here are some quick facts about our herd queen:

Tiny Truffles eating out of what looks like a very big bowl.

1. Truffles was a wee little one when she arrived. She was very small; much smaller than another piglet who arrived at the same time. Which leads to #2

Truffles and Rudy walking through what looks like tall grass, but really it is just tiny pigs in normal grass.

2.  She grew up to be very big girl. By the end of her growth (3 to 4 years) she became very large. She was in fact the largest of the females in height and weight (only one longer than her).

When she and Rudy joined the herd Truffles was frightened of all the newer and much larger pigs.

3.  She was very shy.  Not so much with people but with the other pigs. At the top of her medical history chart it said, “very sensitive; don’t let her get picked on.”  This leads to #4.

At just two years old, Truffles was clearly destined for largeness and greatness.

4. She was crowned queen. Truffles became the herd leader at around age 5, taking over the position from a very large and powerful gal named Julie (not to be mistaken with Julia).  And she has ruled ever sense.

At around 4 years old she and her buddies were all growing but Truffles had definitely surpassed even her older friends.  Truffles in the pig in front.

5. Truffles is not a model for Holiday cards. And she is pretty clear about her position on it. Rudy, her best pal as a baby, helped to ensure her first modeling gig was her last.

We attempted to create a holiday card with this cute piglet… and almost failed.  With a little help from Rudy the shoot came to an end (photo or not) when the box was knocked over and opened.  Which is what you should do to gifts after all.

6. Nobody puts Truffles in a corner. No incoming pig has ever stood a chance against this gentle giant with people, but strong protector of her pig family. She has picked up and thrown full-grown willful adult pigs with her powerful head and quickly establishes dominance over them.

7. She’s a clown. Truffles has the silliest smile all the time and is an instant chatterbox when she hears the voice of her human friends. She’s very happy and loves every second of her life.

Ha ha ha! Truffles loves to chat it up with everyone she meets and loves to get her photo taken.

As the leader the younger and less powerful pigs each come up and greet her in the morning, and any bed she wants based on weather conditions, is her bed.  She just has to walk up to a sleeping pig in the herd and they move- quickly.

Part of the growth spurt occurred when she realized she could move most of the pigs away from the feed area with little work on her part. More food for me!!!

8. She’s a voracious eater. We had to start feeding Truffles separately when she gained a whole lot of weight while rising to power. She began pushing the weaker pigs out of the way to get all the treats. She even knocked small apple trees down in the pastures to obtain the fruit that added to her very large body. Slimming her down was essential, however.

Always a sweet-faced gal, Truffles runs the herd with strength and the respect of her fellow pigs.

9. Truffles has arthritis. While our gal’s condition is severe, it does not slow her down. We treat her daily with pain medication, which she gobbles down in a peanut butter sandwich. She is one of more than 100 Watkins Glen, NY residents who receive meds; you can learn more about healthcare at Farm Sanctuary here.

The belly rub is the best part of her day, and she loves when guests come to visit the farm.

And even though she starts out the days on her knees she is up and on her feet and outside in the pasture within a half an hour. But if she is awakened by a stranger (pig stranger) she is up in a matter of seconds; the knee walking creating a false sense of security for the newcomer who assumes he or she can handle this older pig.  But they soon will find out that Truffles is and will always be the queen of the barn!

It’s good to be the queen!

Please share Truffles’ tale. Together, we can encourage awareness and understanding about pigs as someone, not something. With your support we can continue to promote compassionate vegan living through rescue, education, and advocacy efforts. A compassionate world begins with you!