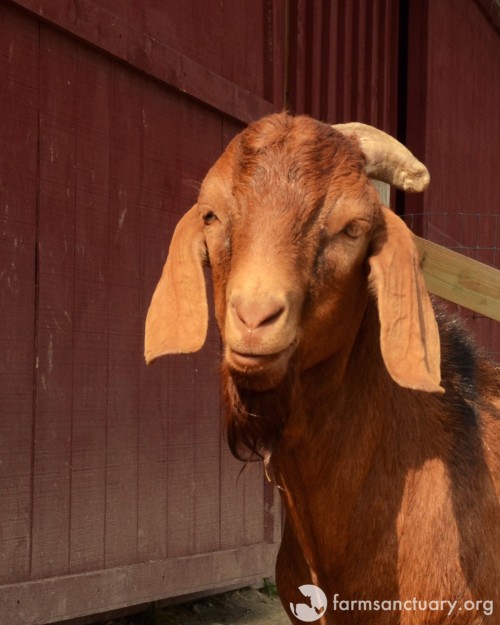 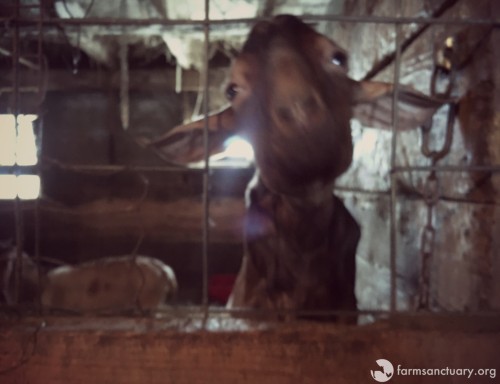 The most desperate to be removed- Halbert- aka Jar Jar Binks- reaches out to make contact. 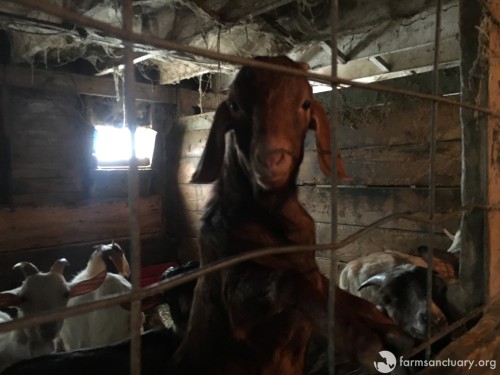 Earl- another emaciated male called out each time you passed his pen. Earl, Halbert, and Ian. Heart breaking photo from the first day I saw any of the animals. Their eyes were so desperate. Earl after the first weeks outside no longer looking frightened of the big world. Hard to photograph- Halbert spends most of his time right in your face! It's all about getting some love! 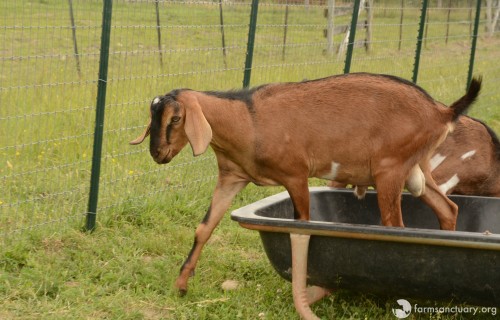 Sweet Halbert jumping out of the feeder

After months of worrying about the possible outcomes of the Franklinville farm case in Cattaraugus County, NY, a deal was finally reached that will allow the 177 animals rescued from that farm to live out their lives in peace. These animals have been receiving care at Farm Sanctuary while waiting for the court ruling that would determine their futures. Over the course of the past few months, as each day passed, we have witnessed a dramatic transformation as these beautiful beings grew mentally and physically stronger. Therefore, it became impossible to think of returning them to such a horrific situation.

The Truth About Humane Meat

Like so many operations that are forced to close due to inhumane or unsanitary conditions, Painted Meadow Farm was marketing itself as a farm-to-table operation: a local farm providing “humane” meat, eggs, and dairy to restaurants, bakeries, and individual buyers. This was not just a betrayal to the animals, but to well-intended people who believed that they were supporting more healthful, local, and humane alternatives to factory-raised animal products. Even popular magazines unknowingly praised this farm, when behind closed barn doors, hundreds of animals were suffering.

A Tale of Some Very Special Goats

So today we will introduce you to a couple of cutie-pie goats who, since their rescue from Painted Meadow, have wormed their way into our hearts. These individuals were among a group of thirteen unaltered boys were crammed together in a dark pen; emaciated, covered in lice and mites, full of parasites, and desperate for help.

In a dark crowded barn the boys were all clinging to each other and desperate to get out.

On my first day at the Franklinville Farm, two of the goats (whom we’ve since named Halbert and Earl) stuck their heads through the gate as far as they could just to feel a loving human touch. Leaving that first day and knowing they could not go with me was almost unbearable.

No longer the skinny and very sickly boy who arrived in March.

Then, a few weeks later, the animals were allowed to be fostered off-site, and we were finally able to bring these boys home. These goats, all around 1 year old, had never left their dark, filthy pen or the ammonia-filled barn. They had never felt the sun, never touched the grass, and had never played. They lived in constant confinement and fear.

Hanging with the boys!  Our sweet Earl had a botched dishorning attempt that left him with scurs growing into his head that need constant trimming.

Getting them on the trailer was insanely difficult because as horrible as everything was at this farm, it was clearly all they knew. Getting off the trailer was equally hard, everyone just starring at their new pasture and barn, unable to move.  And Halbert, the bravest boy, was the only one who followed us; leading his frightened crew to their new life.

Halbert confused on his first night needs to follow Susie back to his barn.

For weeks none of the goats would venture outside on the grass. If one ventured even a few feet outside the barn, the others would cry until he returned. If a caregiver was with them, the goats had only a little more confidence, and ventured outside as a single giant goat cloud. No matter what, they never separated from each other.

A bouquet of goat boys

They quickly fell in love with their human caregivers, however, and would crowd around us when we came in to feed or medicate them. Little by little, they grew braver and more confident, and after a few months, they began to explore their new pasture.

Up close with our sweet boy Halbert!

Now, these brave beautiful goats are no longer destined to become products for human use. Every single day will be a day of freedom and a celebration of being alive. These animals will be seen as individuals, and they will be loved for the amazing, inquisitive, and affectionate beings that they are.

Last bit of grazing at the end of a long day!

Please share this story. We are so grateful to everyone who helped us make headway and see victory in this case. We are especially thankful to the volunteers and Farm Sanctuary supporters, who assisted us and continue to aid us in carrying out our lifesaving rescue, education, and advocacy work.