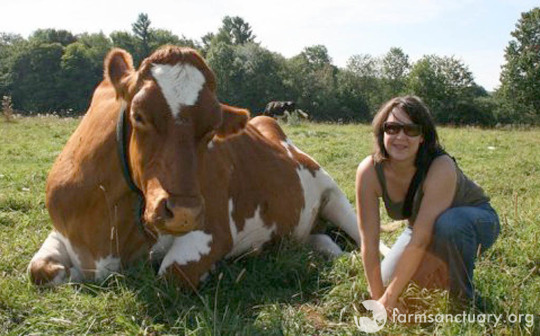 A more compassionate world begins with each of us – and with all of us. No
matter where we are on our personal journeys, we all have the power to make a
difference – whether that means donating our time, contributing
to the causes we support, or making simple decisions that make life a little
better for ourselves and those around us. We make countless choices each
day about the foods we eat, the clothes we wear, and the businesses we support – and the more we learn, the greater our ability to make informed choices. Megan and Chris with Larry Steer in Watkins Glen. Greeting Maybelle pig, who, along with her “sister” Anna, was an original resident at our New Jersey Shelter. Farm Sanctuary Board Member and Hero
of Compassion Megan Watkins has spent a lifetime
emulating her own compassionate heroes – individuals like her mother, who
taught her the importance of working with and for others – while striving to
act in accordance with her own core values.

“[My mother] was the first to teach my
sisters and me that everyone’s voice mattered and that everyone should be
heard,” Megan says. “She also showed us that it was important to keep our
door open, to the people and animals who needed our help.”

While Megan had long
devoted herself to reducing the suffering of those around her, she says it took her some
time for her to fully recognize the impact that her actions could make.

“It wasn’t until later in
my life when I began to fully grasp the plight of farm animals and the conflict
that existed between my values and my diet,” Megan recalls. A trip to Farm Sanctuary’s New
York Shelter proved to be a catalyst for change.

Megan and Chris with Larry steer in Watkins Glen on an early visit.

“I had taken a trip up to Watkins Glen with my husband [Chris] and a group of close friends. Unsure of what to expect when stepping onto the property, I suddenly found myself sitting on the ground, looking into the eyes of the animals, and knowing that I was about to make a change that would impact the rest of my life.”

Today, Megan and Chris are Friends of Hilda Club members, and Megan joined the Farm Sanctuary Board of Directors in 2009 and has served as Chair, as well as on the Development and Executive committees.

Her guidance has been instrumental in helping us spread a message of compassion for and kindness toward farm animals. But for Megan, farm-animal-friendly living wasn’t always
second nature.

It takes great courage
to challenge our longstanding beliefs and practices, and great love to open
our hearts to the even larger possibilities that lie ahead. Early on in her compassionate journey, Megan felt
so overwhelmed by the task of transforming into the advocate she
wanted to become that something just as important fell by the wayside: her
own well-being.

“I actually used to lie awake, unable to shake images of animal
cruelty,” she says. “I would have tears in my eyes, and would just stare at
the ceiling. I felt helpless, like the issue was too big and I was too small.

“When I first became
involved with Farm Sanctuary, I felt a bit like an outsider breaking into a
very tight community. I was newly vegan and, while familiar with the issues
facing farm animals, hadn’t participated in the animal rights movement at such
depths,“ Megan recalls. At times, she says, she felt “somehow not vegan enough, or maybe not activist
enough.”

All of this changed,
though, when she began spending time with farm animals and fellow animal advocates, who helped her find her way within the animal rights community. At
Farm Sanctuary, she made friends like Snickers steer, the first animal to officially
welcome her to the shelter.

“I treasure my picture with this amazing ambassador,”
she says. “He was an incredibly gentle soul and will forever be my reminder
of my awakening to the plight of farm animals.”

Megan with her beloved friend Snickers.

Megan also has a soft
spot for her caprine friends. “I would live among the goats, with the full
understanding that my pockets would be picked and my coat sleeves chewed until
eternity,” she laughs.

Young Min goat uses Megan’s back as a launch pad for fun times ahead!

The more time she spent with these animals, the more she felt at peace with her journey and the more she realized that she did, indeed, belong in this group of people advocating for a better world for farm animals.

Years ago, Megan attended an animal-protection philanthropy conference, where Farm Sanctuary President and Co-founder Gene Baur spoke about the difference we can make for farm animals and one another
when we put compassion first. His words have stayed with her over the years, and brought
her comfort when she started doubting her own ability to make a real impact.

“I remember, as Gene wisely points out, that we are most successful where we
are able to meet people where they are,” she says. “Just like he met me where I was, once
upon a time.”

These days, she applies these lessons when
interacting with others who are beginning their own compassionate journeys. And
whether she’s giving professional advice – educating others on how they can
make charitable donations that are meaningful and impactful through her work as the National Practice Executive for Foundations & Grantmaking at U.S. Trust – or offering compassionate lifestyle tips, Megan remembers the importance of
first starting with the individual and growing from there.

She attributes this
growth to finding community among new and veteran vegans, allowing
her to learn how fulfilling a compassionate lifestyle could be. “My sister, my
husband, and I all transitioned to a vegan diet on the same day,” she says. “This
was incredibly helpful to all of us, as we made our way through cleaning out
kitchen cabinets, restocking ingredients, and comparing recipes. While I would
say that we were all on a learning curve for the first year, we kept moving
forward and soon found ourselves planning trips based on nearby vegan
restaurants, or on Facetime ‘SOS’ calls when our recipes were a flop.

“If I had one tip, it
would be to find a community. To anyone feeling helpless – activate. Get even
closer to the issue. Become part of a community that cares and that is taking
action on behalf of these incredible souls. Whether that is just a friend to
join you or an established group like Farm Sanctuary, every transition is
easier when not alone – and you are definitely not alone on this one!”

We are so thankful for
Megan’s dedication to compassionate living, her input as a member of Farm
Sanctuary’s Board
of Directors, and her valuable advice on how we can
all make a difference.

“[Living compassionately] means listening, being
thoughtful, and showing care and concern in the decisions you make and the
actions you take,” she says. It is a path that we may all embark on – and
when we listen to our inner voice, it is incredible to see the difference we
can make, both for ourselves and those around us. Megan shows us that living
compassionately is also living joyfully – and that when we choose to value the joy
and beauty that surrounds us, we may truly thrive.