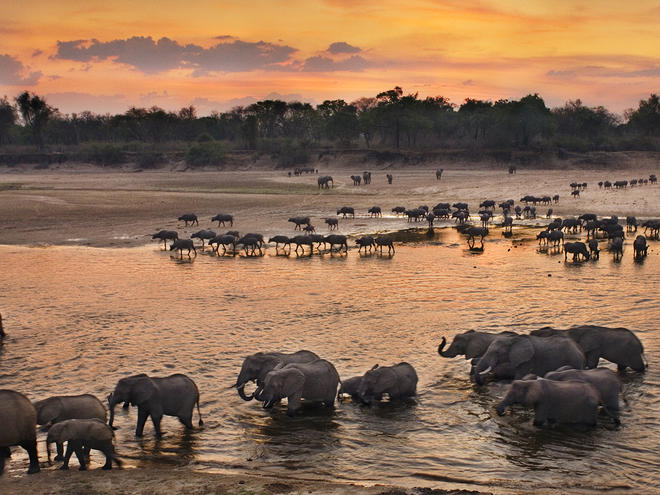 In a major boost for communities and wildlife in the Luangwa river valley, the Zambian government halted plans to construct a mega hydropower dam across the river, safeguarding the diverse benefits it provides to people and nature. Almost 200,000 WWF supporters signed a petition calling for the legal protection of the Luangwa river, helping to safeguard it from the threat posed by dams, deforestation, and unsustainable agriculture—and ensure it can continue to drive the sustainable development of the area. The decision to halt the dam will also help to conserve the breadth of life and resources in the area. One of the longest free-flowing rivers in southern Africa, the 683-mile Luangwa river is a lifeline for communities and two of the most iconic national parks on the continent. Along with providing 25 chiefdoms with water, food, and livelihoods, the Luangwa supports a wealth of wildlife, including over 400 species of birds, the only refuge for reintroduced black rhinos in Zambia, and variety of fish species. Elephants, lions, hippos, leopards, African wild dogs, and endemic Thornicroft’s giraffe also make their home here. Constructing a hydropower dam at Ndevu Gorge would have fragmented the Luangwa, threatening the future of the region’s wildlife as well as the freshwater fish stocks, agriculture, and tourism that communities depend on. After lengthy consultations, the Zambian government has ended existing plans to build a dam on the Luangwa. “Keeping the Luangwa river free flowing is the best decision for both people and nature, and WWF commends the government for halting the dam and instead seeking lower impact, renewable alternatives to power Zambia’s development,” said Nachilala Nkombo, WWF Zambia country director. “WWF is ready to support the government to develop a system-wide energy plan that meets Zambia’s climate and energy goals without damming our remaining free-flowing rivers.” A recent WWF study revealed that just one-third of the world’s longest rivers remain free-flowing, primarily due to fragmentation by dams. And reduced connectivity is one of the major factors behind the 83% decline in freshwater species populations since 1970. Conserving and restoring river connectivity is key to boosting freshwater biodiversity. “I wish to thank the government for listening to our plea as Luembe has the potential to become another area of wildlife tourism in a few years,” said Senior Chief Luembe of the Nsenga people. “The dam would have disturbed the free movement of wildlife in the Luangwa Valley. There are other means that can supply an equivalent amount of electricity like solar power and windmills that can be installed along the Muchinga escarpment, with less damage to the environment."