It’s almost impossible to believe, but by the time this young, beautiful, smart, and
sassy girl was rescued in 2014, she had already entered the “slaughter
chain” — a process that begins when an animal leaves the production farm and is
shipped to a live market or a slaughterhouse. 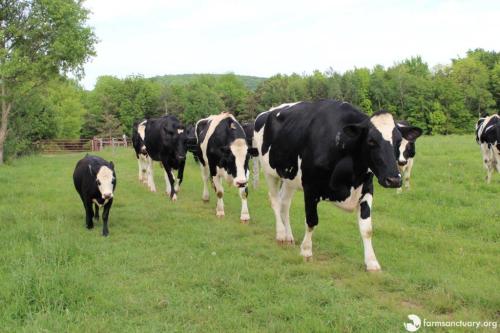 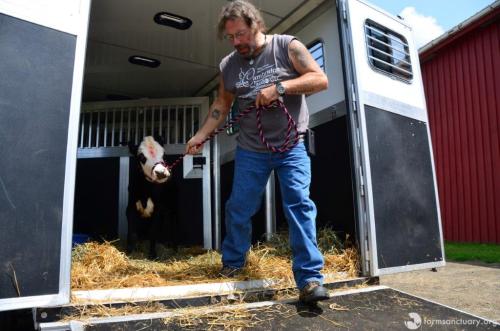 Mike Stura leading Chandini to her new home at our New York Shelter. 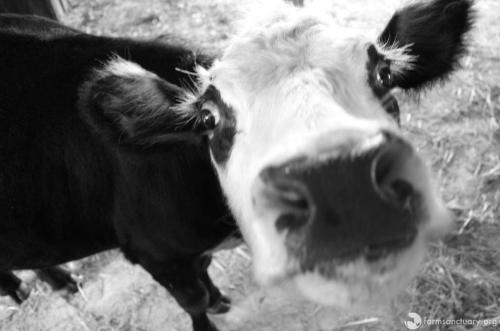 Beautiful eyelashes and what a face. 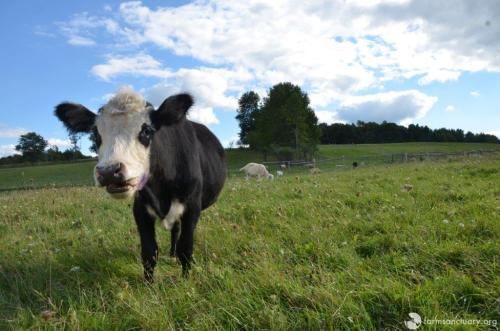 A tiny cow in a pasture full of goats. Up close and personal — Chandini checking out the camera. 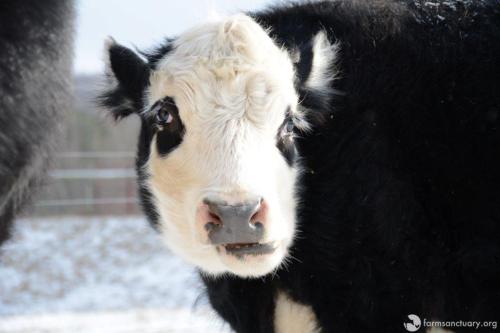 ”Meat” tags are found on the ears of goats, sheep, pigs, and cattle who arrive from the live markets and other slaughter facilities.

For hundreds of thousands
of animals sent each year to New York City’s 100+ live markets, the journey ends
in violence. One summer day, however, this lucky little girl was rescued by Hindus
looking for a cow to serve in their traditional Gow Daan ceremony. This was her
first step in escaping the system that refused to see her as anything other
than a commodity to be bought, sold, and eaten. When she was rescued, she was
no longer a number; she was given a name: Chandini.

Chandini at the Gow Daan ceremony in Queens, New York.

With
her gentle expression, white face, black-ringed eyes, and delicate white lashes, there
was no question that Chandini was striking. And she was tiny for her age, likely bred to be small like so many of the cattle we have rescued from live markets in the city (see Frank

— also very small). Although most Gow Daan ceremonies
offer the cow as a gift, there was no place to keep her in Queens. The priest
to whom she was gifted put out a call that reached Helga

Tacreiter of The Cow Sanctuary, which led to calls to Farm Sanctuary and Mike Stura of Skylands Animal Sanctuary & Rescue.

It was the weekend of our annual Hoe Down, and Mike was able to go to Queens and pick up this amazing girl. Mike arrived at
the ceremony to find her decked out in a gold sari, with red flowers on her ears
and sprinkled at her feet.

While stopping to get gas on the drive to Watkins Glen, a man gestured to the trailer and asked Mike,
“Who is in back?” “A cow,” Mike told him, and the man asked to see her. Of course,
once the man saw her, he wanted to know her name. At the word, “Chandini,” the
man became very excited, and cried out, “This means moonlight!”

Meeting staff members and other new friends from the Hoe Down.

As soon as she arrived at Farm Sanctuary, we drew blood for disease testing, did a full physical including a pregnancy test, and tested her for internal and external parasites. Thankfully, she was not pregnant, but she did have medical issues that needed to be dealt with right away.

Most animals being moved across state lines (with the exception of birds, currently) do not legally require disease testing to go to slaughter, the way they would if they were being placed at another facility. Because of this, Chandini was not allowed near our cattle until she had a clean bill of health. Quarantine of new animals is imperative to prevent the spread of disease.

After her initial testing, she was able to move in with some new animal friends — but not other cattle just yet. Lice and parasites, all species-specific in this case, were not a threat to her new and first Farm Sanctuary family: the goats.

And although she liked the goats, what Chandini truly wanted was to be with her own people. Whenever the other cattle mooed to each other as they were being moved to pasture, Chandini would run the fence line mooing to them. Her calling became more desperate as the weeks went on, so when her treatments were complete, everyone was excited that she was finally able to join the special-needs herd.

Hiding behind Fanny, the matriarch of the special-needs herd, before meeting the boys.

And there she met the love of her life — an equally tiny steer boy named Nik. This did not go over too well with Nik’s best friend, the jealous Ari, who felt that Nik needed only one friend

— but within a few months, this little trio figured out a way to coexist (as they are still doing today).

Ari showing Chandini how happy he was to meet her (note sarcasm).

Point taken: Ari was not a fan of the new girl in town.

As
Chandini bonded with the other cows, she began to flourish both mentally and
physically. She became a bit much for the special-needs herd, which is where guests meet the cattle. She is not a fan of children and made that clear with a few head-butts and some back kicks as she ran away from them. So it was off to the main herd for this trio.

The three are now and will forever be best friends.

Her true personality blossomed, and this very  sassy, spunky, fearless girl
took over the hearts of all the steers in the main herd as well

— all of whom fawn over her like she is the only girl in the world.

Tweed steer is one of Chandini’s many admirers.

Thankfully, though she is a bit of a flirt, she still only has eyes for her beautiful redheaded boy Nik.

Chandini investigates a smartphone while hanging out with Nik.

Chandini and Nik out in pasture together.

“Chandini”
might mean moonlight, but this tiny powerhouse is truly a star. And being the tiniest cow in a barn full of giants, this girl’s personality stands head and shoulders above the rest. (Okay — they all have amazing personalities. But this little gal is one in a million.)

The amazing little spitfire with the beautiful lashes.