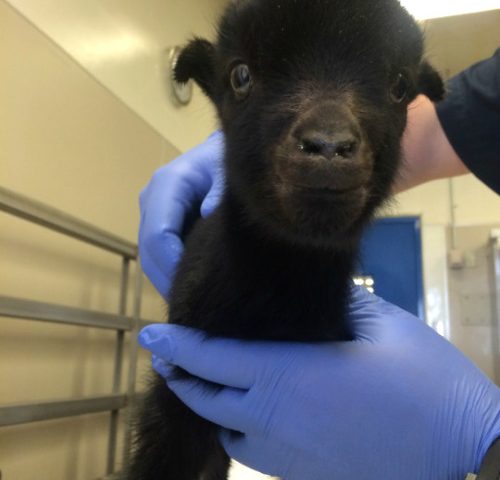 His story might sound a bit like the beginning of a joke — “so a goat walks into a parking lot” — but this was no joke for Clarke. Abandoned in a parking lot as a tiny baby, he was left to fend for himself in the big, cold world when a caring person found him walking around and crying. After a short time with the little goat, it became clear to his rescuer that something was wrong. Clarke had constant diarrhea and was sedate and lethargic. He was taken to a nearby veterinary office that specialized in dog and cats, where it was discovered that he had a high fever. The vet let Clarke’s rescuer know that he was not equipped to deal with a goat kid, and that’s when his rescuer reached out to Farm Sanctuary. Upon hearing of Clarke’s plight, we knew that he needed immediate care. Chad Richmond, Farm Sanctuary’s Director of Facilities Management, immediately set out from our Northern California Shelter to pick up the little goat. Clarke was rushed to a veterinary hospital for large animals, where Northern California Shelter Manager Kate Powell met them. 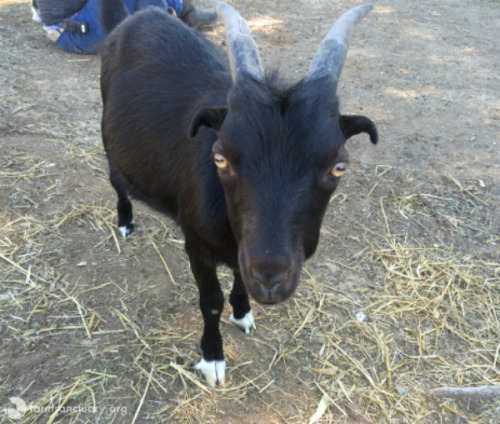 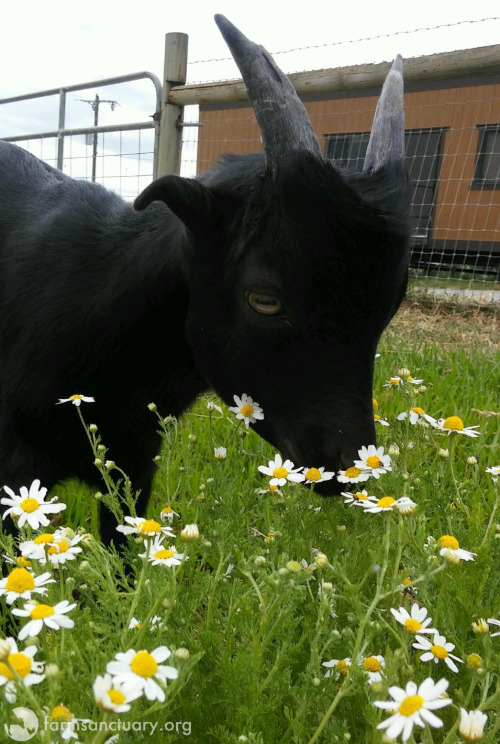 Clarke being examined at the veterinary hospital. After a brief exam, the decision was made to hospitalize tiny Clarke to stabilize him. A fecal test determined that he had cryptosporidium, a parasitic illness. Fortunately, Clarke began to rebound at the vet hospital and was able to come home to the sanctuary a few days later. Because cryptosporidium affects both animals and humans, though, Clarke had to be kept in strict isolation and quarantine. During this time, he fell in love with his caregivers — and we fell hard for him too.

Clarke shortly after his arrival at sanctuary following his hospital stay.

After just a couple of weeks’ time and many more fecal tests, Clarke was cleared of his cryptosporidium and was ready to take on the world — or at least the sanctuary. Running, jumping, head-butting trees, and kissing his caregivers filled his days. Before long, two new rescues — another goat kid and a young lamb, both just a little younger than Clarke — came to live at the Northern California Shelter, and these three babies became their own little herd. It was during this time that we discovered that Clarke had an incredible knack for getting into mischief wherever he went. From jumping into the farm vehicles while going for walks to trying to steal the caregivers’ radios whenever they knelt down to give the babies attention, Clarke was always looking for trouble. We were ecstatic when Clarke and his mini-herd were ready to be introduced to another mini-herd of babies: Timi, Mason, and Topanga lambs. When the big day finally came, Clarke not surprisingly made it clear that he was going to be the one in charge. The three lambs seemed unsure of what to make of this new herdmate, but after a few head-butting matches, they all relented and Clarke officially took over. Clarke and Mason head-butting. These days, Clarke spends much of his time trying to start head-butting matches, running through the pasture, eating all the best hay nubbins, and jumping on and off everything he can. Who would have guessed that the weak and sickly goat kid we first met would grow into the energetic mischief-maker we know today? Clarke has become a strong-willed and sometimes pushy kid with a big personality that can only be matched by the size of our love for him. We can’t wait to see what the future holds for this amazing boy who enjoys every moment of Farm Sanctuary life. Clarke investigates the camera. Please share Clarke’s story. Together, we can raise awareness that goats like him are each someone, not something, deserving of love, care, and respect. With your support, we can continue to promote compassionate vegan living through rescue, education, and advocacy efforts. A compassionate world begins with you!