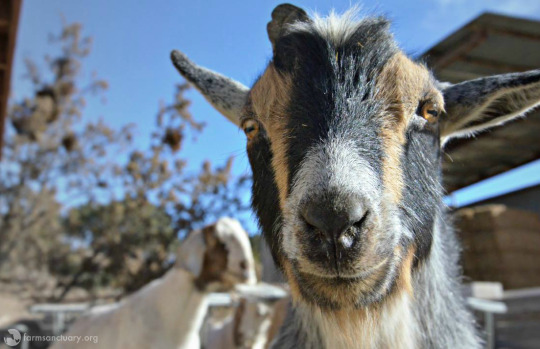 Freddy is the lone pygmy goat at our Southern California Shelter, but he doesn’t seem to mind being one of a kind. Freddy is a happy-go-lucky little guy who is friends with all of the other goats — big and small, young and old. He dutifully and happily follows along after whoever is leading the herd up and around the hill, happy to be part of a goat family at last. 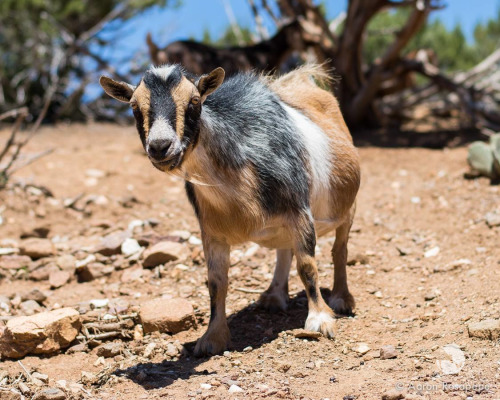 As friendly as Freddy is with his fellow goats, though, he remains skeptical of most people, even four years after his arrival at Farm Sanctuary. What’s unusual about this is that, unlike many of our animal residents, Freddy did not come to us from a background of cruelty or neglect. Rather, he had been a local family’s companion animal.

During the year he spent in this home, Freddy had lived a solitary life, without any other goats for company, and he escaped his enclosure frequently. (We assume that he was lonely and scouring the neighborhood for friends.) Unable to better contain him, Freddy’s family surrendered him to their local municipal animal shelter, hoping he’d find enrichment in a home with other goats. Although the family’s intentions were good, Freddy’s life could easily have taken a turn for the worse after being surrendered at the shelter. The municipal shelters in Southern California do not screen potential farm-animal adopters to ensure that the animals do not wind up on someone’s plate. Anyone living on property zoned for farm animals and willing to pay the adoption fee (which is minimal) is able to adopt a farm animal from the shelter. Thankfully, a Farm Sanctuary member alerted us to Freddy’s situation, and we could neither resist his cute mug nor allow a terrible fate to befall him.

“An only goat is a lonely goat,” but now Freddy is living happily among friends at our Southern California Shelter.

Now safe at sanctuary, Freddy’s life has transformed. He is no longer a lonely goat; he has friends aplenty! The goat crew at the Southern California Shelter is fairly small, and it’s safe to say that Freddy is at the bottom of the pecking order (or the head-butting order, as it were) due to his small stature. But Freddy does not seem to mind being bossed around by the other goats. Happiness exudes from him, simply because he has a family to love and spend all of his time with. The lonely days of the past are now just a distant memory for this little gent.

Freddy, right, with his friend Sofie.

Although his rank in the herd is low, Freddy is not picked on or bullied; rather, he’s friends with everyone. With his best lady pals, senior goat citizens Sofie and Maria, Freddy is able to pass the time with serenity. These friends demand nothing of each other; Freddy is free to simply be himself in their company.

When he’s not napping close to Sofie or Maria on the hillside or in the barn, Freddy spends time with his other goat pals. He often accompanies the dynamic mother-daughter duo of Claire and Erika as they walk up and down the hillside, looking for opportunities for grazing and mischief. Freddy is a little bit sweet on young Erika, who’s not a pygmy but is still only a little taller than he is, and they share occasional romantic moments and long walks in the sunset when the mood strikes them. (Of course, Freddy is neutered, as we do not allow or support breeding, so he is free to woo Erika without any worry that kids might be the eventual result.) For her part, doting mom Claire seems to have accepted the romance between Freddy and her daughter. Freddy and Erika are far from co-dependent in their somewhat casual relationship, though, and they spend more time apart then together.

Erika, the sometimes-object of Freddy’s affection, at left, with her mom Claire at right. (Photo by Aaron Rosapepe)

Freddy also spends time developing friendships with the younger goat trio of Vince, Calvin, and Paul Harvey. These three mischievous boys are full of the contagious playfulness of youth. Freddy often finds himself carried away by their hijinx and accompanies them up and down the hillside as they search for a juniper tree that hasn’t already been stripped of snacks.

Of the three boys, Freddy is most likely to be seen playing with Paul Harvey; the two have developed quite the bromance. Where Paul Harvey leads, Freddy will contentedly follow.

Freddy coming up to Farm Sanctuary staffer Danielle for a scratch.

Over the years, Freddy has warmed to his “humanimal“ caregivers a little. He doesn’t always run away from us anymore, and sometimes he even will allow us to gently stroke his head (though he still doesn’t quite relax into it). If he’s feeling particularly outgoing, he might even come up for a quick head scratch, but there’s always a slight tension in his body when he allows us to be near him. We are patient, grateful for any opportunity to be permitted to give him some much-deserved attention. Our love for him comes with no conditions; as long as he’s happy, enjoying life with his goat friends, we are happy for him!

Please share Freddy’s story. Together, we can raise awareness that goats like him are each someone, not something, deserving of love, care, and respect. With your support, we can continue to promote animal-friendly living through rescue, education, and advocacy. A compassionate world begins with you!