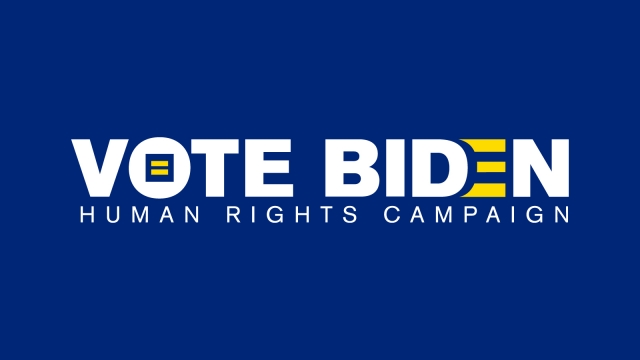 “Vice President Joe Biden is the leader our community and our country need at this moment,” said HRC President Alphonso David. “His dedication to advancing LGBTQ equality, even when it was unpopular to do so, has pushed our country and our movement forward. This November, the stakes could not be higher.  Far too many LGBTQ people, and particularly those who are most vulnerable, face discrimination, intimidation, and violence simply because of who they are and who they love. But rather than have our backs, Donald Trump and Mike Pence have spent the last three and a half years rolling back and rescinding protections for LGBTQ people. Joe Biden will be a president who stands up for all of us.  HRC and our more than three million members and supporters will work day and night to ensure he is the next President of the United States.”

From his advocacy for strengthening hate crime laws in the late 1980s to championing landmark non-discrimination legislation such as the Equality Act, Joe Biden’s decades-long record supporting LGBTQ people is both strong and multifaceted. Few other national politicians have such a long record of acting on behalf of LGBTQ equality.

Throughout his campaign, Biden has committed to advancing LGBTQ equality as President. In 2019, just weeks after announcing his candidacy, Biden committed to passing the Equality Act as President at the 36th Human Rights Campaign Columbus Dinner. His campaign’s LGBTQ platform is the most comprehensive LGBTQ equality plan by a presumptive presidential nominee in our nation’s history.

As a Member of Congress over 36 years, Biden championed dozens of pieces of legislation providing greater protections for LGBTQ people. His support of the Employment Non-Discrimination Act (ENDA) advocated for our dignity in the workplace. And his courage to do what’s right, even though it may be unpopular, twice stopped two constitutional amendments enshrining marriage discrimination as the law of the land. Biden’s early support for HIV/AIDS resources helped establish the Ryan White HIV/AIDS Program. While as chairman of the Senate Foreign Relations Committee, Senator Biden helped secure the reauthorization of PEPFAR, which significantly expanded the funding and targets for treatment, care, and prevention of HIV/AIDS and repealed a statutory ban on visas for people who were HIV-positive.

As Vice President, Biden continued his decades-long fight for LGBTQ hate crime prevention playing an integral role in passing the landmark Matthew Shepard and James Byrd Jr. Hate Crimes Prevention Act. He played a leading role in repealing Don’t Ask, Don’t Tell and opening service for transgender people giving LGBTQ service members the visibility and respect they deserve. In 2012, his support for the freedom to marry marked a major turning point for the marriage equality movement, contributing to a sea change in public opinion that ultimately culminated in a Supreme Court decision in Obergefell v. Hodges that made marriage equality the law of the land.

Throughout his career, Biden has been ahead of the curve on expanding protections and rights for transgender Americans. In 2012, he called transgender rights the “civil rights issue of our time” articulating a truth that many — even in his own party at the time — left unaddressed. He reiterated that statement when launching his LGBTQ platform earlier this year. He worked with President Obama to install transgender Americans throughout the administration including to positions within the White House. Throughout his campaign, Biden has elevated the need to address the epidemic of violence facing the transgender community — especially transgender women of color — and articulated a strong plan to empower transgender Americans in the workforce to help combat conditions that lead to that disporportionate violence.

In 2020, our engagement and mobilization efforts will only deepen. HRC has elevated Texas to a top-tier target state, growing our top targets to seven states: Arizona, Michigan, Nevada, Ohio, Pennsylvania Texas and Wisconsin. Across our 7 target states, HRC has identified 3.4 million Equality Voters at risk of not turning out — these voters will serve as our central focus in the months ahead of Election Day. HRC will have at least 45 full-time staff in these seven priority states and an additional 20 staff focused on a second tier of states and districts.

In 2017,  HRC began the largest grassroots expansion in the organization’s four decade long history.  As part of that initiative, HRC has mobilized pro-equality voters nationwide to resist the Trump Administration’s attacks on LGBTQ people, immigrants, communities of color, and other marginalized communities.. To that end, more than three years ago, HRC placed full-time staff in six battleground states: Arizona, Michigan, Nevada, Ohio, Pennsylvania and Wisconsin to help mobilize our 3.3 million members and 57 million Equality Voters — voters who prioritize LGBTQ equality at the ballot box including LGBTQ people and our allies. HRC boosted turnout amongst Equality Voters from 36% in 2014 to 56% in 2018. In the 2018 midterms, HRC registered more than 32,000 voters and recruited more than 4,200 volunteers, who worked over 9,400 shifts and clocked more than 30,000 volunteer hours. In the critical final four days of the campaign, HRC staff and volunteers in get-out-the-vote efforts alone knocked on more than 80,000 doors, and held 36,400 conversations with voters at their doors and by phone on behalf of our endorsed candidates. That engagement led to an 81% win rate for HRC’s 480 endorsed candidates allowing us to pull the emergency brake on the hateful anti-LGBTQ agenda of the Trump-Pence administration and elect a Congress that would hold them accountable.