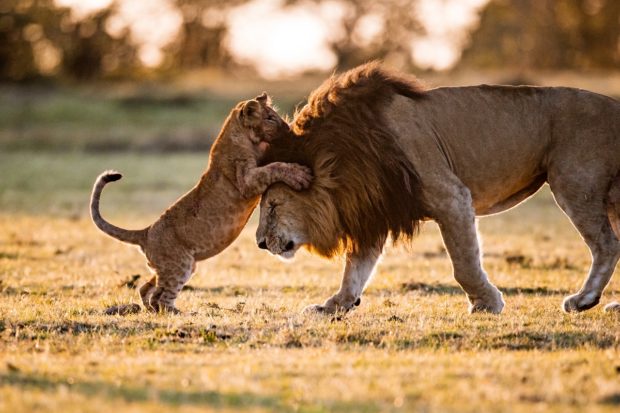 Trophy hunting is a cruel and dangerous pastime that is pushing some of the world’s most iconic animals closer to extinction, and the Humane Society family of organizations has put our might behind stopping it. In the past four years we have encountered tremendous challenges under the Trump administration, and these continued in 2020 with the Department of the Interior hacking away further at the Endangered Species Act, the bedrock law that protects American—and global—wildlife, removing protections for gray wolves, and opening national preserves in Alaska to the cruelest trophy hunting practices, among other attacks.

But we have doubled down with legal and legislative efforts to fight off these challenges, often joining forces with like-minded allies, and we’ve kept up the pace of progress on new fronts. Through our investigations, such as the one we conducted at the Safari Club International convention earlier this year, we have continued to educate Americans about this grisly indulgence of a privileged few. We have also accelerated our efforts to end wildlife killing contests—horrid spectacles where contestants compete to kill the most or heaviest animals for cash prizes.

Here are some of the most notable victories against trophy hunting in 2020:

We continue to lay the foundations for more positive change in years to come, and build upon past successes. In October HSI, HSUS and our partner group Center for Biological Diversity filed a lawsuit against the U.S. Fish and Wildlife Service for allowing leopard hunting trophy imports. We, along with our allies, are challenging damaging rollbacks of Endangered Species Act regulations in court, and, thanks to the efforts of Humane Society Legislative Fund, a key committee in the U.S. House of Representatives has already voted to reverse these dangerous changes. We’ve put the administration on notice that we will sue unless it restores federal protections to gray wolves and unless it takes well overdue action on our petitions to protect leopards and giraffes from trophy hunting and other threats under the Endangered Species Act. And we are suing the feds over the rule opening Alaska’s national preserves to cruel trophy hunting practices.

We continue to challenge, through the courts and in Congress, the imports of trophies and trafficked animal body parts. We are urging South Africa to stop allowing the trophy hunting of elephants, lions, rhinos and leopards and our partners are urging China to ban the imports of rhino hunting trophies.

This is a global war with battles that are being waged on so many fronts in so many nations, and at stake are some of the world’s most beloved animals like elephants, lions, giraffes, leopards, bears and wolves. But the Humane Society family of organizations has the expertise, ability and international reach to take on these fights and win. We look back with pride on these achievements of 2020 and hope you will join us in celebrating them. We could not have done this without your support, and we hope you will stand by our side as we continue to make progress against trophy hunting and for all animals in years to come.