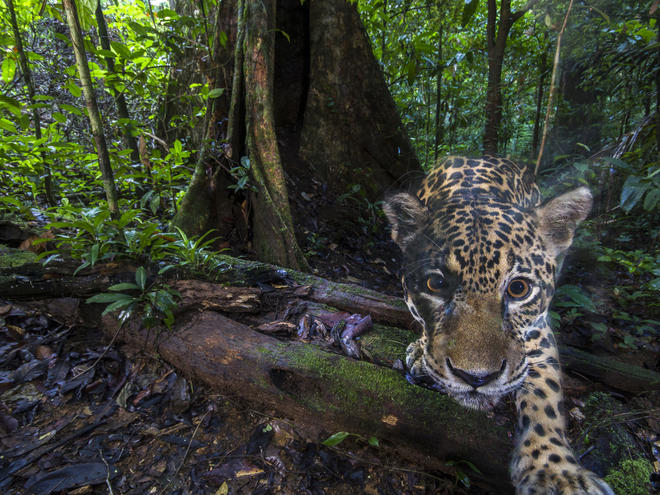 The jaguar (Panthera onca) holds many titles; The main predator in the Amazon, it’s also the largest big cat species in the Americas and the third largest feline in the world, after tigers and lions. This iconic species plays a vital role in its habitat by controlling other species’ populations and helping maintain a healthy ecosystem.

Unfortunately, the jaguar’s range has decreased by half in the last 100 years due to deforestation and agricultural activities, resulting in reduced and even extinct jaguar populations in some countries. Despite numerous conservation efforts, their populations continue to decline.

Human-driven activities including hunting, destruction of forest habitat, loss of prey species, and human-wildlife conflict are also impacting jaguar populations. Jaguars were once hunted for their pelts until the 1970s, when stricter laws and new protections prohibited such activity. Now it appears that with increasing Chinese investment in Latin America, demand for jaguar parts, like fangs and claws, is rising again, driving illegal jaguar hunting and poaching, even in strongholds like the Amazon.

Since 2017, WWF has been monitoring the populations of this emblematic species in the Napo-Putumayo Corridor—740,000 acres of forest (nearly the size of Yosemite National Park) that spans through Colombia, Ecuador, and Peru.

Between 2018 and 2019, WWF installed 129 camera traps in the region to conduct a census of jaguar prey species and better understand the area’s conservation value. As a result of our efforts, more than 30 jaguars have been identified with an estimated presence of at least 2,000 cats throughout the corridor.

“The jaguar has become a priority species for WWF,” said Jose Luis Mena, Director of Scientific Practice of WWF Peru. “We must ensure its conservation by forming alliances with other organizations and the government.”