This year marks Marshall’s debut in Farm Sanctuary’s Adopt A Turkey Program – but this charismatic boy made his big entrance into our hearts three years ago. Marshall was so excited to be outside that he has no problem being out in the rain or the snow. He is like a mailman! Marshall made a quick friendship with an older boy, Moke. 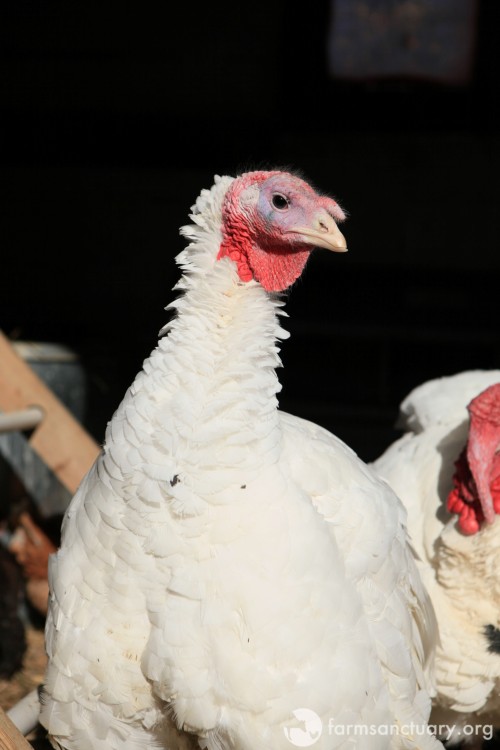 Our boy arrived with a few cuts and bruises, but overall, he quickly became the healthy boy we know and love. 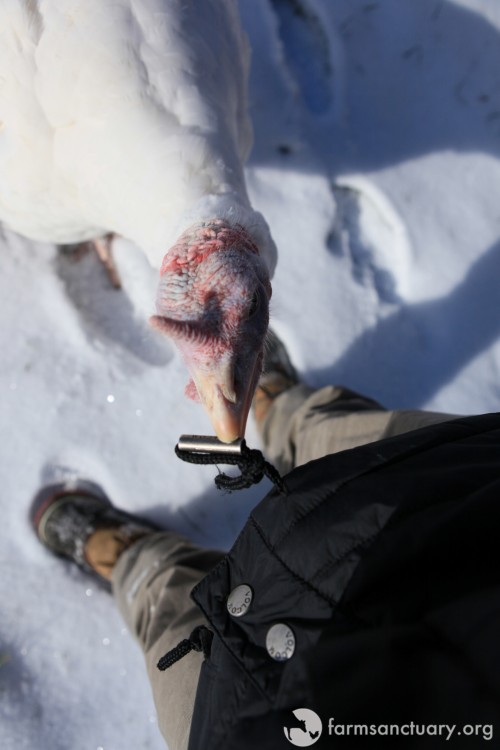 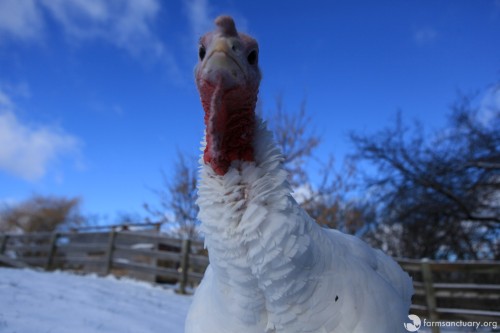 Nothing but blue skies ahead for this boy!

Our cute guy loves life outside and really loves the grass! Spring is his favorite time of year.

Marshall’s escape from fate as a ghost in the factory-farming machine came on the very evening of the New York City premiere of The Ghosts in Our Machine, a film directed by Liz Marshall that follows activist and photojournalist Jo-Anne McArthur in her efforts to document the plight of abused and exploited animals and advocate for their rights as sentient beings.

And of course, it was there when I’d get that fateful call. A turkey had just fallen from a truck on the way to a live market nearby, and so I left to get him. He was beautiful, and relatively unscathed despite the accident. I immediately fell in love with him. He was curious and friendly. We chatted all the way home to our New York Shelter.

Unlike some of the turkey boys who come directly from factory farms, Marshall thankfully kept some of his important physical attributes — including his lovely snood. Check out this handsome guy showing his stuff.

We decided to name him after Liz, and honor the movie that has touched so many and opened people’s eyes to what actually goes on in the machine.

Liz Marshall, a huge turkey fan according to Turpentine (with whom she is pictured), was the perfect person to name our boy after! Photo by Jo-Anne McArthur / We Animals.

Marshall has a story to tell about the exploited animals most people never see. Simply by letting his charismatic personality shine, he serves as an ambassador for the millions suffering unseen in factory farms.

A broad-breasted white turkey, Marshall was bred for one purpose: to become a fleeting meal — the life behind it unrecognized and invisible. He was debeaked at a young age and bred to rapidly reach “market weight” within just a few short months. Thankfully, Marshall was not slowed down by his debeaking, and he explores the world with his altered beak (sometimes a bit too roughly).

This tall boy, a member of the broad-breasted white breed, casts a huge shadow over the snow.

Turkeys used for meat suffer horribly on factory farms. Most spend their entire lives without ever setting foot outdoors. Genetically manipulated to grow extremely fast in order to achieve “market weight” at a young age, they are slaughtered at a fraction of their natural lifespan. An estimated 46 million turkeys are killed each year for Thanksgiving alone.

Our sweet boy is so happy that he is one of the lucky ones.

This year, we’re thrilled to have Marshall as one of our incredible turkey ambassadors through our annual Adopt a Turkey Project. For the past 30 years, we’ve encouraged people to participate in a compassionate holiday tradition by sponsoring one of our resident turkeys, helping us rescue animals and provide care for them at our sanctuaries, as well as educate and advocate for turkeys and other farm animals everywhere.