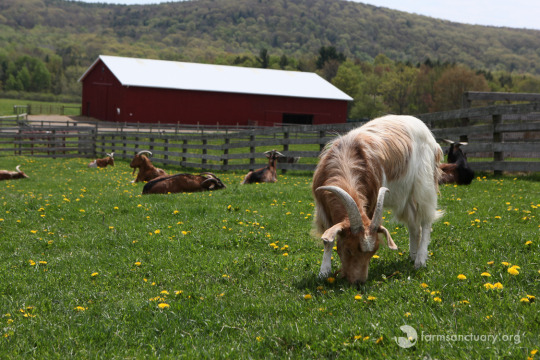 August 9th marks four years since we first met Nate, a goat who “grabbed life by the horns” and is now the boss of his own destiny at our New York Shelter. On his “rebirthday,” we’re honoring this domineering
yet very charming character, who is loved and appreciated for the unique individual he is at Farm Sanctuary. Nate today: A dignified ambassador for his species who teaches us so much about taking charge of our own destinies! Shy-boy Nate during his first meeting with the herd: all of that would soon change! 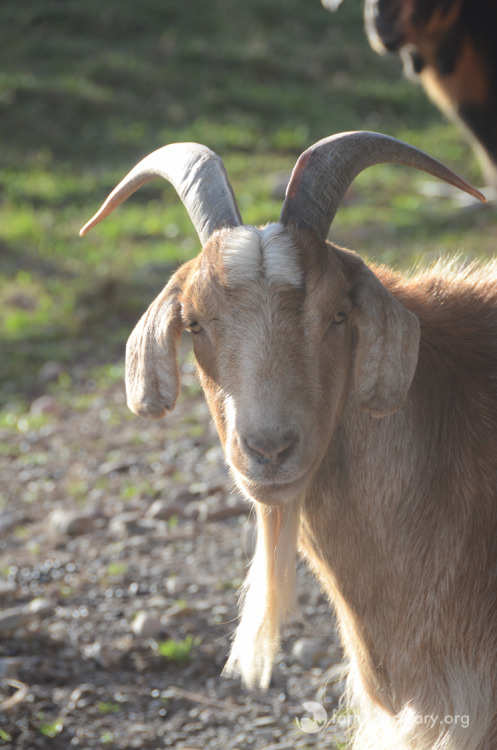 Always keen on being the center of attention – that’s Nate! Nate cautiously investigates some of his new pals.

Nate butted heads with some of his new herdmates during their first meeting.

Nate is truly living the Farm Sanctuary life! He’s finally free to enjoy all the dandelions his heart desires

— and he always makes sure he gets the cream of the crop!

While Nate’s origins are unclear, our paths crossed his in 2012, when he and three other goats were dumped in a small town not far from our New York Shelter. Two of the goats were reportedly seen “harassing” cattle in the area. Meanwhile, Nate and the fourth member of the group wandered onto a property near the site where they’d been dumped, but the property owner was not at all happy about having goats as guests. The man called Farm Sanctuary and advised us that, if the goats remained, he would catch them and sell them at auction. This would almost certainly have been a death sentence for them, consigning them either to a meat-raising operation or directly to slaughter. We immediately dispatched a rescue team to try to save them from this fate.

When we arrived, however, three of the four goats were nowhere to be seen. We suspect they may have been captured and brought to auction, or killed by the farmer whose cattle were being “harassed.” The only goat remaining was Nate, a strong-willed boy who refused to submit to whatever fate befell his friends. Nate was young, powerful, and armed with a set of horns to keep the man who threatened him at bay. Of course, he also kept our rescue team at bay, evading capture for hours and sometimes charging straight at his well-meaning pursuers. Eventually, the team succeeded in corralling Nate and loading him onto the trailer that would bring him to safety and sanctuary.

Nate was more hesitant during those early moments, but would soon show himself to be the assertive leader he was finally free to be.

Before Nate could get settled, we needed to ensure that he was healthy enough to join a herd. All of our newly rescued residents go through a series of health checks and a mandatory quarantine period for the protection of  all of the animals — both new and already-established residents. Nate spent the night in a temporary pen, and then it was off to the Cornell University Hospital for Animals to be examined and neutered. Feisty Nate wound up challenging our handlers yet again before he even made it to Cornell, bowling over three of our sturdiest staff members before they could secure him in the trailer.

Nate’s behavior could easily be seen as aggressive; in fact, similar comments were made a few months ago, when our friend Frank escaped from a live market in Queens. While Nate is a tough guy, he was also scared and fighting for his survival. Nate had no reason to trust us — but we hoped that, in time, he would come to realize that we meant no harm. And since goats are herd animals, we figured that being among members of his own kind would give him the comfort he clearly needed to relax and feel at home.

On the way home from Cornell: Nate’s feeling hesitant, but will soon show himself as the dominant powerhouse we know him to be.

Once Nate moved into our “Wisconsin barn,” the other goats were indeed a comfort to him — though not in the way one would think. Nate proved himself to be a bit of a bully — a trait he retains to this day. Nate’s assertive spirit remained in full effect, and he frequently engaged in head-butting challenges to let everyone else know that he was head goat. His new companions were not always pleased, but in time they grew to respect this dominant leader and allowed him to carve out his own special place in the herd.

— we suppose you could say he and some of the other boys butted heads.

Our society tends to value submissiveness in animals, and the people Nate encountered prior to his rescue probably viewed his assertiveness as an annoyance at best, and a threat at worst. But at Farm Sanctuary, we value everything that makes Nate who he is — even the challenging parts. There is so much we can learn when we pay attention to what individuals like Nate are truly trying to say. Behind his gruff demeanor lies an indomitable spirit, a true survivor whose resilience we admire each day. Like all beings, Nate simply wants to be loved and valued — and we can learn so much when we take the time to recognize the good in others, whether animal or “humanimal.” So happy fourth birthday, Nate! We are honored to share our lives with you and grateful for the lessons you impart each day.

…but he loves spending time with his friends, living the carefree life that they all deserve. Here, he enjoys a fine day of grazing with pals Race Car, Snuggie, Percival, Genesis, and Natalie.

Please share Nate’s story. Together, we can raise awareness that goats like him are each someone, not something, deserving of love, care, and respect. With your support, we can continue to promote compassionate vegan living through rescue, education, and advocacy efforts. A compassionate world begins with you!

Visit Farm Sanctuary for more information about Frank, and ways you can contribute.