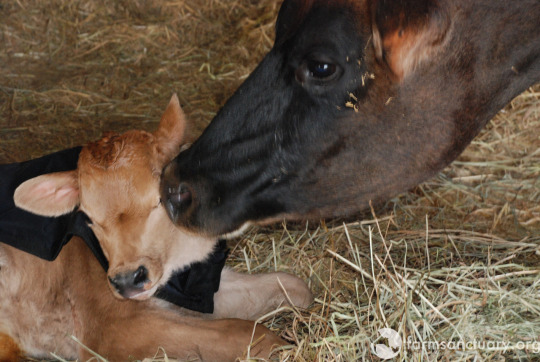 February 9, 2015, would become an extraordinary day for us, but it started off just like most other days at our Northern California Shelter. Our rescued residents were being fed, their barns were being cleaned, and those who needed them were receiving their morning medications and treatments — a very typical morning. Typical, that is, until a call came on the radio that there was a new addition to one of the barns!

Betsy, a cow who’d come to Farm Sanctuary a few months prior, had a very special surprise in store for her caregivers. She and two other new residents, Honey cow and her young daughter Meredith, had appeared on a reality TV series called “Utopia.” After the show was canceled, its producers sought a better life for the bovine family, and their search led them to Farm Sanctuary. We happily welcomed this sweet family of three, which was soon to become a family of four: Betsy was pregnant at the time of her arrival.

Her due date was still two weeks away on the day her baby was born, but little Nutmeg just couldn’t wait to see the world. He surprised us all (and, we would discover as he grew, this was very true to his nature).

Typically, when Farm Sanctuary takes in a cow who is pregnant, staff members spend the night in the barn to watch her around the clock before she gives birth, in case any complications arise. But with Betsy’s early delivery, we were surprised — and relieved to find her baby healthy, cleaned, standing, and nursing when we arrived.

Nutmeg already cleaned and standing when we arrived.
Nutmeg was the first calf to be born at the Northern California Shelter, and we couldn’t believe how tiny and perfect he was.

We immediately set to work making sure he was healthy and stayed that way. We dipped his umbilicus in betadine to help prevent infection, and put a coat on him. Mom Betsy was understandably concerned during this time; she’d been used in the dairy industry before her stint on TV, meaning that every calf she’d had before had been taken away shortly after birth. She relaxed when we finished examining Nutmeg, and quickly set to work giving his face a reassuring cleaning.

Betsy, being the outstanding mother that she is, made sure that Nutmeg was safe, clean, well fed, and loved.

Betsy clearly remembered all too well the pain of having a baby taken away. Not yet understanding that this time was different, she would usher Nutmeg behind her every time a human came around in an effort to prevent him from being taken away. Every time she did this, we’d talk to her soothingly, trying to reassure her that she never had to worry about Nutmeg being taken away. It was heartbreaking to see the fear in her eyes at the thought of losing another baby, but we took comfort in the knowledge that this would never again happen to her — and we yearned for the day that she would understand this, too. It took Betsy nearly two weeks to return to her normal, jovial self.

It was impossible to deny the love Betsy and Nutmeg felt for one another. (Photo by Connie Pugh.)

While Betsy had some anxious moments during those first few weeks, little Nutmeg was busy exploring the new and fascinating world around him. He was enthralled by his surroundings, and wanted to investigate everything he possibly could. When he was just a few days old, we allowed him into a small pasture (with his mom, of course). Nutmeg was ecstatic! There was so much to see and smell that he didn’t know where to start!

Pasture time and so much to explore! (Photo by Connie Pugh.)

He had so much fun that he ended up having to take quite a few naps (and mama Betsy was never far away during these naptimes).

Nutmeg and Betsy resting in the pasture. (Photo by Connie Pugh.)

The adventures kept on coming for this little man. Soon he met his “sister” Meredith and “aunt” Honey as well. He wasn’t quite sure what to make of Meredith, and seemed relieved to get to know her through a fence at first.

Nutmeg investigates his new “sister” Meredith through the fence. (Photo by Connie Pugh.)

Soon enough, though, he was ready to be with Meredith without a fence to separate them. When first introduced, they ran and played together, with moms Betsy and Honey not far behind having a happy reunion of their own! (Honey and Meredith had temporarily been moved to a neighboring stall after Nutmeg was born.)

Relaxing in the pasture. (Photo by Connie Pugh.)

From that point on, time seemed to move in a whirlwind — Nutmeg was growing more and more every day, and we were thrilled to see his boisterous personality growing right along with him.

Who could resist that face?! (Photo by Savannah Rodriguez.)

The exciting day finally arrived when Nutmeg and the rest of his family were ready to be introduced into our special-needs cattle herd. With two babies involved, we knew that this comparatively calm spot would be the best place for a first introduction to some new bovine friends.

Nutmeg in the special-needs herd!

Nutmeg was thrilled to have new friends, but those friends weren’t quite sure about this tiny baby and his friend Meredith at first — especially because the youngsters kept trying to nurse on everyone in the herd.

Nutmeg’s partner in crime Meredith seeing if it would be possible to nurse from Cupid. (Spoiler alert: It wasn’t.)

Soon enough, though, they were part of the herd, and it was as if they always had been.

Everyone eating together at the ring feeder for the first time.

Nutmeg growing up much too fast, and lounging around the pasture looking cool as he does it.

Nutmeg has come a long way from the tiny calf he was nearly two years ago. He has grown into a beautiful young steer — and while he may look different on the outside, on the inside he is still the same boisterous and loving calf he has always been.

Nutmeg and Betsy enjoying a sunny, green day.
Now, at nearly two years of age, you might think of Nutmeg as a fun-loving, slightly naughty teenager. And like many human teens, he enjoys testing his boundaries a bit these days and seeing what he can get away with. Of course, a little youthful naughtiness could never dampen our love for this special boy! Fortunately, he has an amazing family to guide him, and a loving group of “humanimals” to support him every step of the way. We love watching him grow up in safety and free from fear, and we can’t wait to see what’s next for this much-loved boy who is definitely the spice of Farm Sanctuary life!