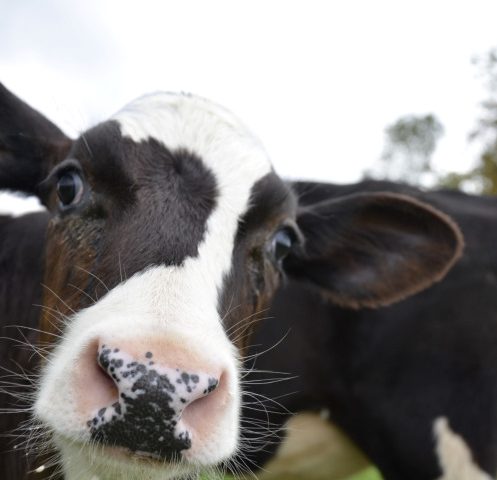 Happy 5th Anniversary Orlando!  Well, not just Orlando but Orlando and his four brothers from different mothers. While happy days are here for these celebrated steers, their pre-Farm Sanctuary life was a nightmare.
It all started with a man, who purchased calves in an attempt to raise cattle for cheap beef. Males born to dairy cows are regarded as useless by milk producers and sell at livestock auctions for only a few dollars each when they are just a few days old. Hellos cute friend. So happy to meet you! Orlando always a bit of a camera hog. 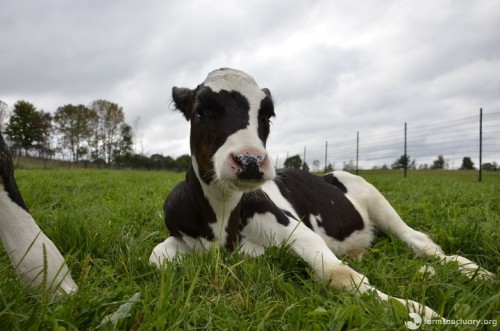 Relaxing and enjoying the grass, fresh air and his new life 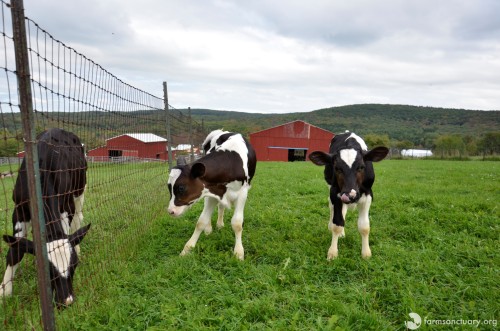 With best pal Conrad meeting Sonny, another friend to be, through the fence. 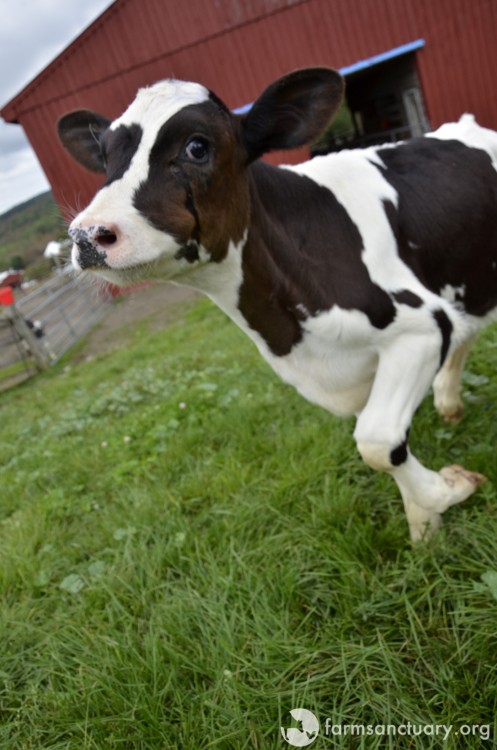 Always the clown and although still sick- running like a goof 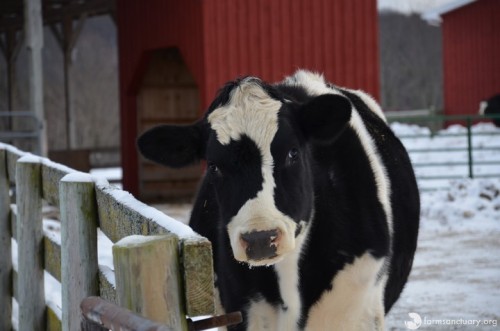 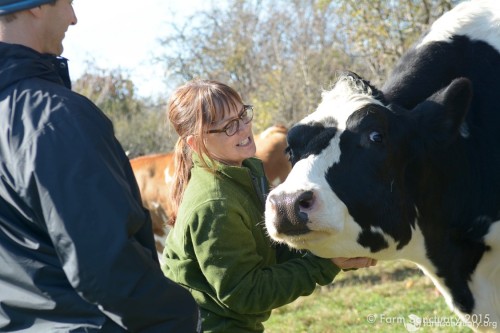 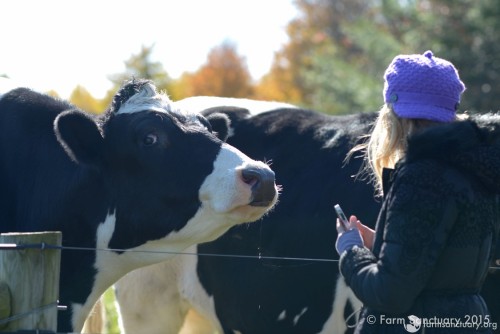 The basement where the calves were kept was full of trash, mold, and mildew.

Even spending so little to acquire these baby boys, their new owner would not pay the few
dollars it would have taken to provide them with needed medical care. You see, the calves had contracted pneumonia and their health was quickly dwindling. To treat these calves it would have required a bottle of antibiotics since they were all so small.  But instead they continued to languish and their conditions worsened.

The dead calves lay in the grass around the home where the survivors remained in the basement awaiting the same fate.

As things got more and more out of hand the farmer that instead of calling a vet or buying the drugs he would instead start shooting the calves.  By the time authorities intervened, he had already killed six of them. This man was arrested, but not for animal cruelty – he had violated his probation by discharging a firearm.

Orlando’s nose to the left and friends Conrad, the smallest, Milbank and the large boy in the back Arnold loaded up in our trailer and enroute to Cornell.

As soon as the surviving calves could be confiscated, the local SPCA contacted us and we rushed to the scene. As we stood at the door of a dank and fetid barn, the flashlights of SPCA agents played over the faces of the five calves who had escaped the brutal fate of the others, peering out at us from the darkness.

No longer a number, this little guy is now Orlando.

Going in to gather them, we found the young animals unfed and severely underweight. Their milk replacer was moldy. Their pneumonia had become severe, and they were dehydrated. We drove them all straight to Cornell University’s

Buddy Conrad getting a check up

At the hospital, the calves received ultrasounds to determine the extent of their pneumonia and
were started on IV antibiotics and fluids. Though some struggled to overcome the ailments caused by cruel neglect, they all have grown into amazing, healthy, and very happy giants.

Arnold, the giant of the group, being evaluated at Cornell.

Tweed (the nerd of the herd and tallest), Conrad (the sweetest and most talkative), Milbank (the shy, stoic boy), Arnold (the brave leader of the group when they arrived), and our Animal Of Farm Sanctuary today, Orlando, the goofball of the group live together to this day.  Each weighs well over a ton now, and they are still the very best of friends.

One of the smallest but thankfully one of the quickest to come around both psychologically and physically, Orlando won over everyone who met him very quickly.  He was so shy as were all the calves when they arrived, but within a short time he became one of the silliest calves we have ever rescued- and a true lover of humans.

As a baby he loved to lie down with you and roll over on his side; a very silly move for a very silly calf.  He often rolled his feet under him and looked like a praying mantis.

He was always following us around and just acting silly.  He loved to run and buck around caregivers and guests alike; which is hysterical until you weigh ½ a ton.  Thankfully as he got larger he chose to take that play to the other cattle, including a few giants that he thought he could challenge who thankfully realized he was just a goof and had no idea how small he actually was.

Down for the count, Orlando loved nothing more than to roll over and lie with a human friend.

Orlando pretending to be a praying mantis.  So funny.

Orlando is very expressive and often gave us what we call “the stink eye” or sideways look that means I want to rough house with you.  Again this is very cute when you are 100 pounds or less but after that- not so much.

Who you callin’ stink-eye lady?

Always best friends from day one until now.  Orlando getting a head sniff from buddy Conrad.

He still is best pals with his original best bovine buddy Conrad.  He and Conrad arrived best friends and still hang together.  They are named for two brothers- Orlando and Conrad, and have a brotherly relationship. Lots of love between these two boys.

It’s us: The goof and the sweet boy.

The two boys (Orlando, left and Conrad, right) figuring out the world together.

Orlando and Conrad as babies, munching on some grass.

All grown up and still a goof: Orlando with his best bovine partner in crime Conrad.

When he’s not fraternizing with Conrad, Orlando spends much of his time with Sonny and Tweed.  He has so many bovine friends and unlike a lot of the younger boys, he has no desire to challenge the others or attempt to be the leader, although he pretended to as a baby.  But that was all in good fun.

Moving into the special needs herd and Orlando thinking he could take on the king; Thunder. Silly Orlando.

He loved his time with Fanny as well, and he saw her as a mother and the love of his life during his time with the special needs herd. He always respected this matriarch and was by her side with his family of brothers at the time of her death.

Orlando saw Fanny as the mother he never had and loved his time with her.

And what does this goofball think about people after all he went through? Well, he seems to really love them. Of the five survivors Orlando and pal Conrad are the biggest fans of humanimals; two of the boys would prefer not to interact with them.

But our dear Orlando has not only forgiven the human species, but he has since learned we are friends and he cannot wait to befriend humanimals.

Please share Orlando’s story. Together, we can encourage awareness and understanding about such unique individuals as well as the unfortunate truth about the beef and dairy industries. With a growing number of delicious dairy-free and meat-free options and recipes, it’s never been a better time to make the switch. And it is one of the easiest ways to honor farm animals like Orlando.