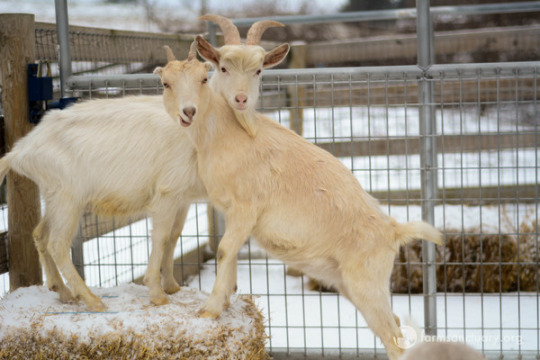 When we first met Tatiana a year ago this week during the Hudson Valley rescue, this tiny, emaciated, and weak goat was also a very frightened little girl. She was young and motherless; whether due to neglect or slaughter, her mother was not there, and Tatiana was starving. A little bashful but getting much better. 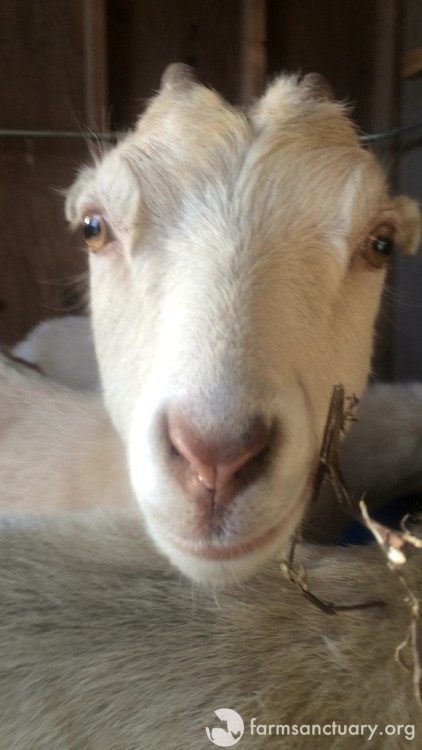 Is there something in my teeth? 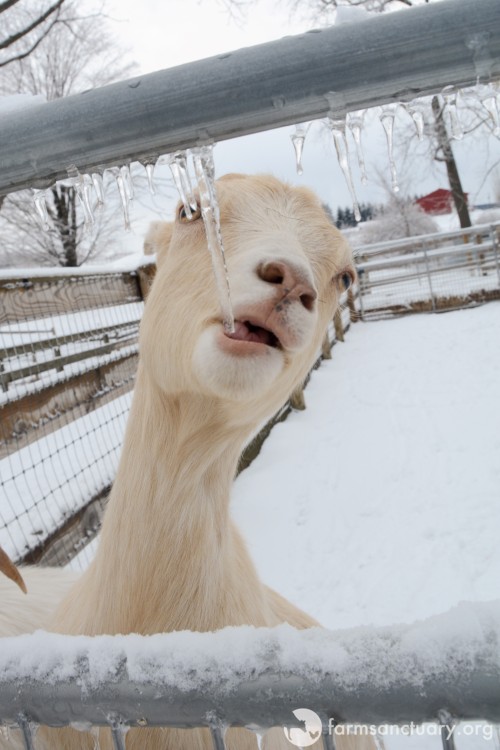 First winter and learning to eat the icicles. 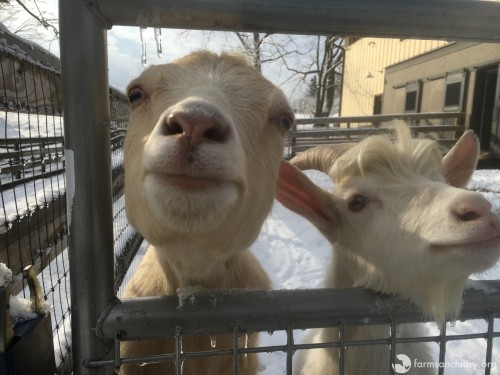 When she arrived groceries were what she needed. She loves the hay! 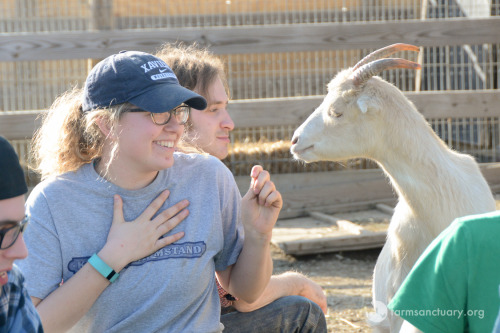 Loving all the volunteers and guests she meets- Tatiana loves to be loved and to return it!

She and Archie learning to read. 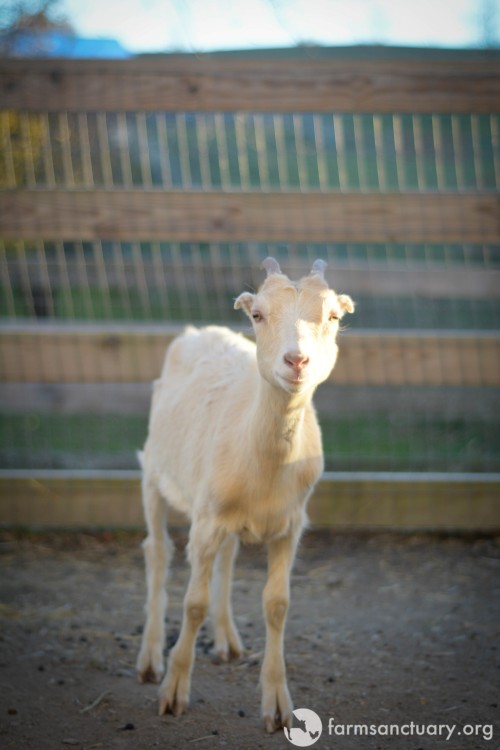 Meeting some of the spring break volunteers; Tatiana is always spreading the joy Adding to Tatiana’s troubles: She had a very heavy parasite load, including meningeal worm, which caused her to drag her back legs. She was also anemic as a result of other internal parasites. And these parasite issues left her weak and unable to fight off infection.

Looking much better after her trip to Cornell, but she was still very lonely and not accepted by the other goats.

She was so afraid of us, her caregivers, and just seemed so lost. We tried bringing her into our onsite hospital and putting her with some of the other sickly goats, but the group was already very bonded. Hope, Dana, and Harper were a tight little clique and had been friends during their stay at Cornell.

Starting to warm up to humans — after weeks of treatments and some much-needed weight gain.

Tatiana was with the main group of goats and just not well.

We treated her, but her condition got worse, so off to Cornell she went. There, she was put on IV antibiotics and wormed again, since round one had not worked.

When she came back from Cornell, she had no real family to return to, but she found and connected with another goat who also had no one. Archie, an older male goat who’d been picked on by the others

when he returned from Cornell, and this tiny young girl became the closest of friends. In each other, Tatiana and Archie found pure happiness.

A still-very-shy Archie came out of his shell with his new gal pal, who also seemed to find strength from him.

Both goats went from frightened to loving and curious, and together they took on the rest of the world. And even when given the opportunity to be with goats their own age, they chose to be together.

Not just while standing — this is how the pair sleeps together as well. Wrapping their necks!

And together they are quite the team.

Archie needs his girl and has trouble keeping up with his very tiny little herd. But Tatiana waits for him, so Archie, no matter how slow, is never left alone. And Tatiana needs Archie; she was so tiny and weak when they first bonded, and he was so protective of her until she grew strong.

Tatiana and Archie eating icicles together.

They also have fun, which seems to be the key to most successful relationships. They play, they run, they prance in the pastures, and they love coming to visit humans together. They are a pretty inseparable pair of cuties.

Tatiana and Archie enjoying a meal together.

They also have been very good at bringing their joy and love to others.

Tatiana at play on the goat jungle gym with her herdmates, including twins Lulu and Min.

Fellow Hudson Valley survivor Aretha, who is terrified of people, was training her babies Lulu and Min to be terrified as well, until we moved the two little groups in together.

Tatiana and Archie with Aretha and the kids.

The twins’ Aunt Tatiana and Uncle Archie showed them that Farm Sanctuary humans are amazing and can be used as jungle gyms (which is a goat thing). Now the two girls are brave (even though mom still is not) — they, too, have found the joy spread by this incredible goat and her best pal.

Although we could have easily placed Tatiana, who has made a full recovery, in an adoptive home, we could not place Archie, who still drags his back legs a little bit (especially when he is tired) and has other conditions that will require medical care in the future. So Tatiana stayed with us too, of course — this is not a couple who should ever be split up.

And they still live with Aretha and the kids Lulu and Min, but the herd has also expanded to include Olive, who also came to us from the Hudson Valley rescue, and her daughter Maggie (with whom Olive was pregnant at the time of the rescue).

And this group of seven is all joy, which they spread to every human they meet.

Tatiana the videobomber, with Lulu and Min.

Tatiana enjoying some much-appreciated neck scratches from her human buddy Tatiana, after whom she was named!