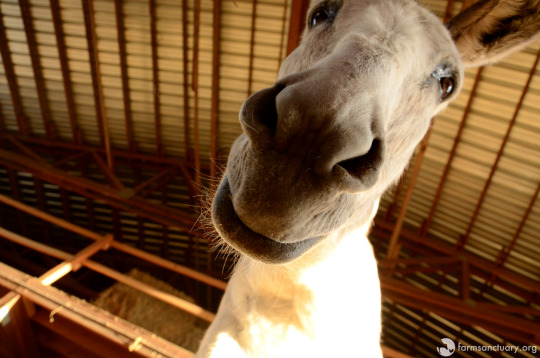 In 1993, Farm Sanctuary began taking in animals at our then-new Northern California Shelter in Orland. Ninety-four animals were rescued that year, and Waylon donkey was lucky number 86. He came to the sanctuary along with another donkey named Willie. The two were named after Waylon Jennings and Willie Nelson, of course. 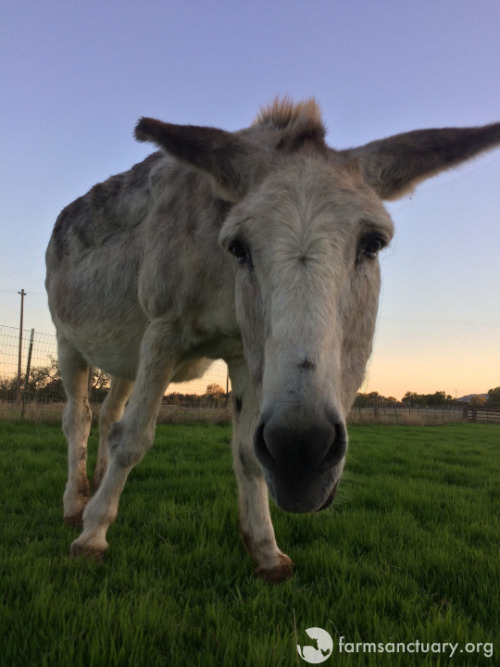 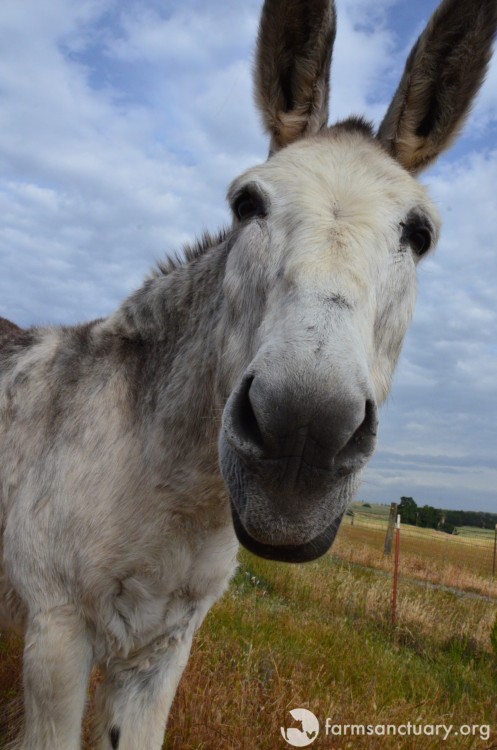 “Do I look aggressive to you? Seriously?”

…Waylon quickly established himself as one of the friendliest residents at the sanctuary. It was not uncommon for him to nuzzle or snuggle up next to one of his humanimal friends. He immediately took to his new home, and was soon enjoying all of the activities donkeys love best. He spent his days running and playing in the open fields, taking dust baths, and standing in front of the fans to keep cool on hot Orland days.

Among the many amazing things about Waylon are his huge lips

—  he has the biggest lips around and often stands with them hanging down, giving him a very funny and cute expression.

In 1995, Waylon met the love of his life: a beautiful donkey named Bonnie (Bonnie Raitt). Bonnie had severe and chronic issues with her hooves, but this didn’t bother Waylon at all. He would patiently stroll through the pastures with her, moving at a slow pace that was easy for her to maintain.

“Let’s give ‘em something to talk about, Waylon.”

The two of them spent 18 long and beautiful years together at sanctuary. If Bonnie had to go to an equine hospital for issues with her hooves, Waylon would be waiting and calling for her at the gate upon her return.

Bonnie getting her feet soaked, and a worried Waylon watching closely.

We were able to manage Bonnie’s hoof issues for many years, but unfortunately, in 2013, she reached a point at which we could no longer keep her comfortable. We had to make the heartwrenching decision to let her go. As difficult as it was for sanctuary staff, it was even more devastating for Waylon. We knew we needed to find a new friend for the heartbroken donkey, and as luck would have it, we had recently rescued a miniature donkey named Albert.

At his previous home, Albert had developed a reputation as an escape artist. He kept breaking out, and because of this habit, he came to live at Farm Sanctuary. Before moving in with Waylon, Albert had been living with some of our resident sheep, but he seemed to be craving the companionship of another donkey.

It was a warm, sunny day when we introduced them to each other. They were a little unsure about what to make of each other at first, but before we knew it, they were best buddies.

They live with the special-needs cattle herd, and spend their days exploring the pasture they live in. They look for the best bits of grass to nibble on, and always keeping an eye out for any funny business that might be going on. These two are set in their ways and have a specific routine

— they do not take kindly to any interruptions in their daily plans. They do not like surprises (unless that surprise is a carrot).

Waylon has had 23 amazing years at Farm Sanctuary, and counting! Out of the original 94 animals rescued that first year of the Northern California Shelter’s operation, Waylon is the last one residing here. He has been here from the beginning, and has seen so much during his time with us. We love this special boy and are so happy that he’s part of the Farm Sanctuary family!

Please share Waylon’s story. Together, we can spread the word about just how amazing donkeys like him are! With your support, we can continue to promote compassionate vegan living through rescue, education, and advocacy efforts. A compassionate world begins with you!