October 10th marked the anniversary of a sober and stressful day, but a remarkable new beginning for more than 170 farm animals, rescued from appalling neglect at a Hudson Valley backyard butcher operation.

We walked onto a property that was essentially part garbage dump, part graveyard. Animals were wasting away amidst filth and debris — and the remains of their friends and family members. 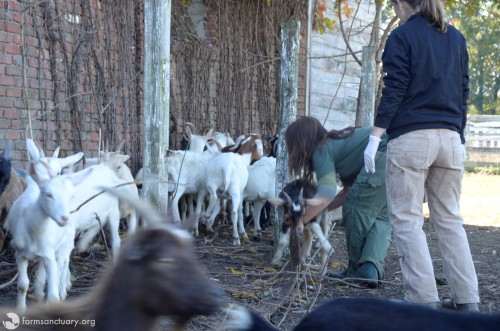 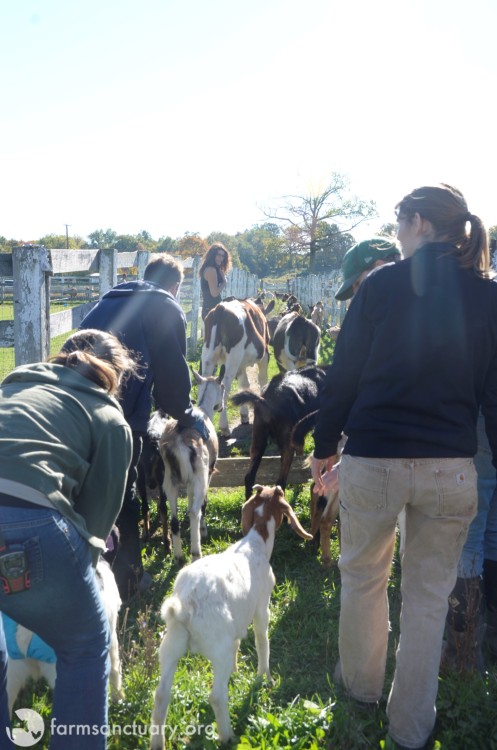 The survivors were suffering ailments that had gone untreated, since their “owner” did not deem it worthwhile to invest in their care. These animals were terrified, having never experienced kindness from humans before. But at Farm Sanctuary, all of this would change and they could finally begin to heal.

It is inspiring to reflect on what a difference a year has made and the incredible transformations you helped make possible. Take Benedict goat, for example. This boy was one of the sickest of the animals we took in.

Benedict collapsed at the scene and could not use his back legs at all due to a parasite (meningeal worm) that had gone untreated. This condition is treatable but in the case of Benedict too much spinal damage had been done.

His now best friend Chucky was one of the more terrified of the animals rescued and had sustained an injury that left him in a great deal of pain; and like the others was left untreated.

His large horns were broken down into the skull and blood drained from his nose (the horns connect to the sinus).  He arrived with severe anemia so surgery could not safely be performed for over a month, at which time the horns had to be stabilized. He is also a fainting goat so would fall over when frightened. The two goats bonded as they convalesced in our Melrose Hospital and became inseparable friends.

These days, Chucky is a sociable boy who loves making friends with humans, which we never thought would be the case. He is super protective over Benedict, serving as a father figure for the younger goat. And Benedict is defying the odds and living the rich, fulfilling life that he deserves! This summer, we fitted Benedict with a special wheeled cart, which helps him stay active, happy, and healthy.

Now, nothing can slow him down, and he spends his days running and playing with his best pal, Chucky. All Chucky and Benedict needed was somebody to believe in them – and we are grateful that you were there when they needed us most.

Like Chucky and Benedict, Mouse pig was also denied the critical care he needed to live the quality of life he deserved. When he was younger, Mouse sustained a break in his right rear leg – and sadly, he never received the treatment he required. As Mouse grew, his leg became withered and unusable, and he was forced to compensate on his three functioning legs. Mouse languished alone in a squalid pen, without a friend in the world to comfort him.

Thanks to your support, however, Mouse’s entire outlook changed for the better. Shortly after his rescue, Mouse felt comfortable enough to simply be himself – and what an incredible being he has shown himself to be! Mouse impressed his doctors with his indomitable spirit, facing each surgery and therapy session with grace and enthusiasm.

And after recuperating at Cornell University’s Nemo Farm Animal Hospital, he returned to our New York Shelter for good this spring. Mouse continues to impress all who meet him. He is learning to use his new prosthetic leg, which will keep him mobile and keep his other legs from breaking down.

Read about the humanimal who designed his amazing prosthetic leg.

Mouse enjoying some time in the sun.

While Mouse was once cast aside because of his disability, you gave this cheerful boy the fighting chance he needed to thrive. And he continues to inspire us each day!

Despite
the heartbreak these animals endured, Farm Sanctuary life has helped them find
peace, allowing them to move past tragedy and start their lives anew – and
alongside the individuals who make life worth living.

Olive
goat and Cheryl cow were both pregnant at the time of their rescue. Cheryl had no doubt seen family members perish. And while Olive was allowed to save her twins, Roger
and Jennifer,
she had likely witnessed others meet a tragic fate. On Christmas Eve, Olive gave birth to Maggie – a joyful, healthy baby whose arrival helped our entire sanctuary family heal.

And in March we welcomed Pecan, Cheryl’s son, whose companionship
has been instrumental in Cheryl’s own recovery.

The arrival of these babies
signaled the beginning of a new era – an opportunity for all of us to witness
the difference that compassion makes. And those animals born at sanctuary and not in an environment where many would like perish, will never know the fear and sense of loss their mothers went through year after year.

The Hudson Valley case was
a major turning point in our lifesaving rescue, education, and advocacy work.
And because you were there when we needed help, these survivors will spend the
rest of their lives in freedom, as ambassadors for their species. We are so
inspired by how far our friends have come, and thankful for all you have done
in making their physical and emotional recoveries possible. Thanks to your
support, more and more people are putting compassion first – and we are
incredibly honored to celebrate each individual as someone, not something.