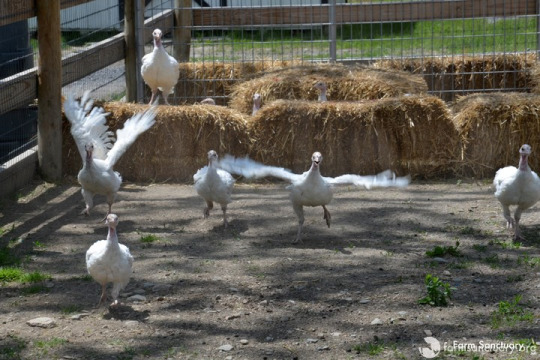 Turkeys, like all animals, love life and want nothing more than to live free from fear and pain. Sadly, some 46 million are slaughtered each year for Thanksgiving alone.

The lucky turkeys who call Farm Sanctuary home serve as ambassadors for their species, having taught us just how intelligent, emotional, and thoroughly fascinating these birds can be. They are known to cluck greetings to visitors entering a barn, eat grass from guests’ hands, and strut around showing off their feathers. Impress your family and friends with these reasons they should see turkeys as friends, not food. Babies’ first snow. Young turkeys, like all beings, are curious and so excited to learn and see new things. 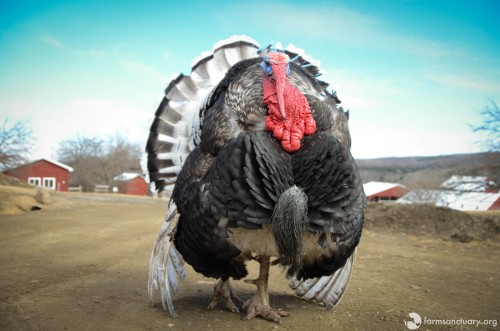 The amazing Turpentine (RIP), strutting his stuff at the New York Shelter Baby Cecelia checking out the camera while perching! 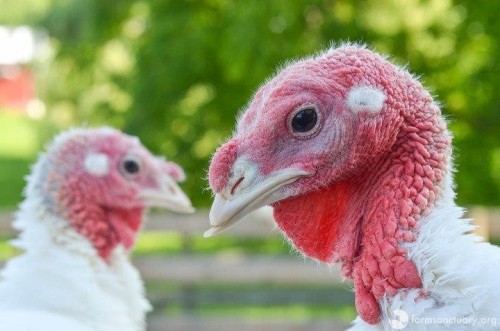 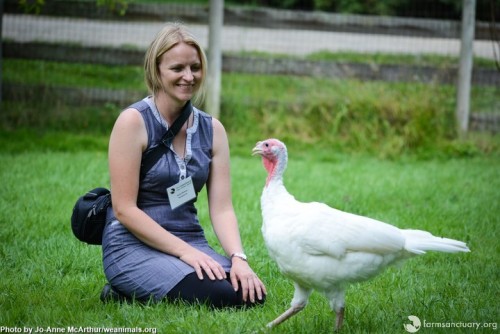 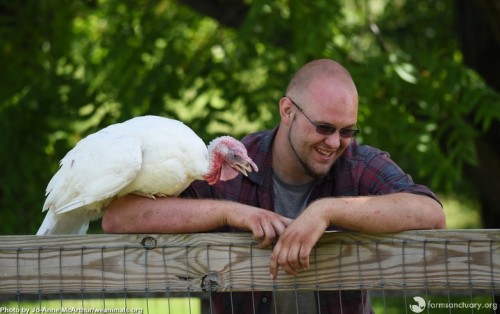 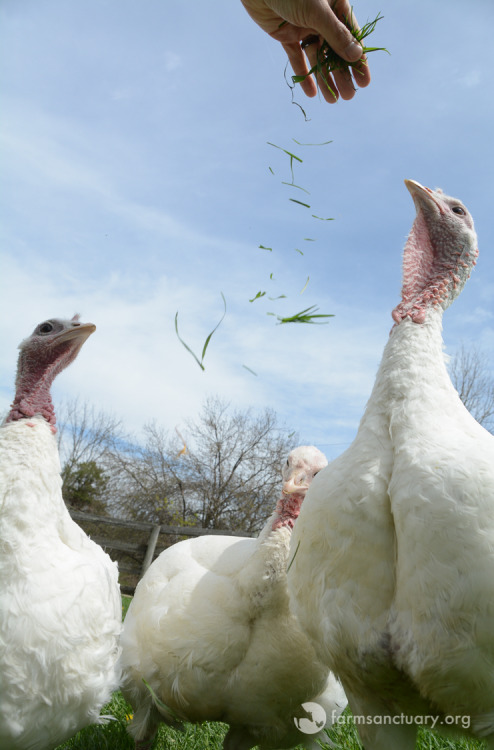 Industrial turkey babies, named for the characters from the movie Frozen, relaxing in the sun — able to feel its warmth for the first time in their lives.

Turkeys form strong social bonds with their family members and flockmates. In the wild they sometimes travel in groups of 200 or more. When a turkey is removed from her group, she becomes distressed and calls to her flockmates until she is reunited with them.

Birds of a feather flock together. This cute crew arrived together and have been around each other since they were tiny balls of fluff. They are the Frozen turkeys — as in Anna, Elsa, Kristoff, Olaf, etc.

Turkeys are very playful animals. Tom Savage, poultry scientist and animal science professor at Oregon State University, observed that if you throw an apple to a group of turkeys, they will play with it together, almost as though it were a football!

Baby turkeys spend hours flapping, running, jumping, and pretending to fly. Like all baby animals, they enjoy a fun day full of play.

Turkeys make a complex range of sounds. When they want to gather their family group, they make an urgent-sounding call. When a turkey is startled, she uses a special “putt” sound, and every bird in the flock looks up with alarm. Sometimes a mother will use a “cackle” when entering or leaving a roost to prompt her brood to follow. Turkeys even make a cat-like purr when they are feeling relaxed and  content.

If baby turkeys, or even adult turkeys, get separated for even a minute, they call to each other (and the babies are surprisingly loud). The babies also have a “whistle” call that they only use when they are young.

Marshall showing his colors — and at this moment, it is red. If he is feeling enamored of the ladies, he turns a mostly blue color, and if he is angry — a wine red.

John James Audubon, the famous bird expert and naturalist, observed that, when a mother turkey’s eggs are close to hatching, she will not leave them under any circumstances. Once they’ve hatched, the mother will keep her poults safe under her wings at night until they’re big enough to roost in the trees on their own.

Although industrial turkeys do not get a chance to experience having a mother, they often find substitutes at our sanctuaries. Here, newly arrived babies help clean food off their father figure, Baba!

A wild turkey’s home territory often exceeds 1,000 acres. Turkeys have an incredible knack for remembering locations. They have been known to recall a location they’ve visited only once. They can remember where they found food the year before and will return to the same spot in search of a meal.

All of our turkey residents are great at remembering feed areas and wait patiently year after year for apple season (as do the deer).

Male turkey siblings go out courting females together. The siblings display their plumage alongside each other to attract potential mates. Only the dominant brother, however, will mate with interested females.

Brothers Phoenix and Apollo out looking for the ladies; they always did so together.

Sadly, some other turkey facts are far less pleasant.

Between 1929 and 2014, the weight of the average turkey raised for food in the U.S. increased by 131 percent, from an average of 13.2 pounds to an average of just over 30 pounds, preventing commercially raised turkeys from performing their natural behaviors and causing them to suffer from foot and leg issues.

Wild turkeys, who weigh between 8-18 pounds, are able to fly up to 55 miles an hour, but turkeys raised for meat on factory farms are so large that they can’t even perch. When turkeys arrive at Farm Sanctuary’s shelters, they attempt to perch and even fly until they are too large to do so.

Young industrial birds just want to be turkeys and, for a time, are still light enough to fly up into trees or perch on fences. This presents difficulties for us when trying to close them in at night (since they are not safe outside), but it’s amazing to see them just being turkeys. Sadly, these girls were never able to perch again a few months after these photos were taken.

Industrial turkeys’ unnatural weight causes many health problems, including heart disease, heart attack, and arthritis, at as young as one month of age. At our sanctuaries, the turkeys are weighed monthly to ensure that they are not gaining too much weight, and if they are, we separate them during feeding times and cut their feed back. This allows them to live longer, happier lives, since their legs cannot take the extra pounds.

Pain in the Name of Profit

On factory farms, turkeys frequently have the ends of their beaks and toes cut off without anesthesia — practices known as debeaking and detoeing — to prevent them from injuring one another as they are crowded by the thousands into dark, filthy warehouses.

Baby Rhonda arrived at our shelter in Watkins Glen, NY, after being debeaked and detoed. There are an enormous number of nerve endings in both the beak and toes of these birds, so this procedure, done without anesthesia, is painful, and a percentage of birds perish because of it (many from starvation).

This is a full-grown Daisy, who as a baby was also debeaked and detoed. This leads to horrible leg and foot issues as the turkeys age, but we counteract this by controlling their diet and doing pain management where necessary.

Far From Their Roots

Completely unlike their wild ancestors not only in terms of physique but also in hue, most commercial turkeys are totally white — the natural bronze color selectively bred out of them to eliminate uneven pigment colorations — because of consumer preference for even flesh tones.

I’m wearing snow camouflage, but sadly, this is not what nature intended.

Catering to consumer preferences for “white meat,” the industry has selectively bred turkeys to have abnormally large breasts. This anatomical manipulation makes it impossible for male turkeys to naturally mate with females, eliminating these birds’ ability to reproduce without artificial insemination. As a result, artificial insemination is now the sole means of reproduction on factory farms, where breeder birds are confined for months on end.

Even on a restricted diet, you can see that the young, spry Marshall with his pal Moke (in the back) and the difference a few years makes on their legs and the ability to hold up their huge breast muscle.

Turkeys, along with other poultry, are not protected by the federal Humane Slaughter Act.

“What the (group of turkeys)?!” That is turkey humor — although there is zero humor in the fact that these birds are seen as nothing but a product instead of the amazing, sentient being that they really are.